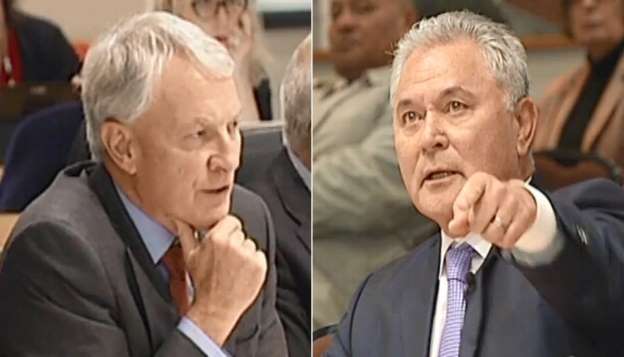 As the Auckland Mayoralty battle between Goff and Tamihere heats up to spittle level, and with City counsellors splitting their loyalties between the two, Goff is getting dragged back into Court to defend his attack on free speech under the guise of protecting against hate speech…

The Free Speech Coalition will go up against Regional Facilities Auckland over its decision to bar two controversial right-wing Canadian speakers from using a council venue.

Last July, the coalition, which is backed by figures from the left and the right, said it was trying to broker a deal with Auckland Council to reinstate the planned event featuring Lauren Southern and Stefan Molyneux after it was cancelled in July 2018.

But later that week, coalition member Melissa Derby said: “It’s regrettable to see the [Auckland] mayor [Phil Goff] digging his heels in when we have given him every opportunity to reconsider and avoid litigation costs.”

A two-day hearing is set to get underway at the High Court at Auckland on Monday.

Axiomatic Media, the Australian-based promoter of the event for Southern and Molyneux, is the main plaintiff, along with Dunedin bookseller Malcolm Bruce Moncrief-Spittle, who had booked flights and premium tickets for the Auckland events, and coalition member David Cumin.

The defendants are listed as council agency RFA, the council itself, and Mayor Phil Goff.

Publicity about the proposed visit by Molyneux and Southern – who is barred from entering the United Kingdom – along with efforts to have the pair denied visas, prompted RFA to cancel the booking on security and health and safety grounds.

Subsequently, the Goff made statements which incorrectly gave the impression he had a role in the cancellation, and the Free Speech Coalition was formed, swiftly raising $90,000 for a legal challenge.

…the last thing Goff wants while he’s trying to paint Tamihere out as a braggart who boasts  about policy he can’t implement is an example of Goff doing the exact same thing during the Free Speech debacle.

Luckily for Goff he’s got Simon Wilson to howl on about how awful John Tamihere would be as the first Māori Mayor of Auckland.

Don’t forget, ‘ARE YOU NOT ENTERTAINED’ productions presents Pub Politics throughout September live from Chapel Bar on Ponsonby Rd.