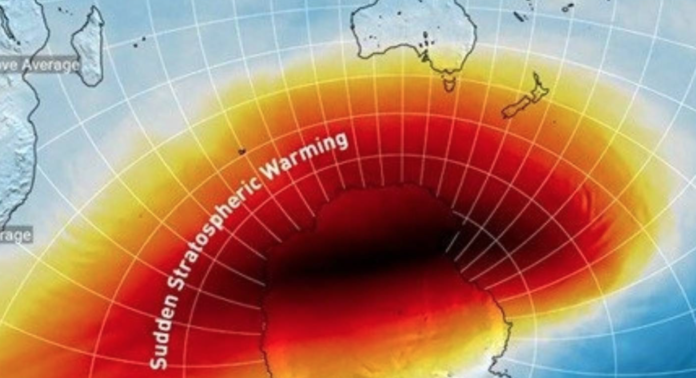 Exceptionally rare warming above Antarctica may be affecting NZ’s weather

One of the southern hemisphere’s rarest phenomena may be under way in the skies above Antarctica and could be driving New Zealand’s stormy August weather.

Meteorologists are debating whether a sudden stratospheric warming (SSW) began earlier this month, putting a wobble into the polar vortex of westerly winds around the Antarctic and allowing freezing air to escape more easily and head towards southern New Zealand.

We are now starting to see the southern polar-vortex wobble the way we have seen it in the North Pole and that could cause incredibly unstable weather patterns for us. This exponential explosion in heat created by human pollution is causing massive erratic mutations in our weather system.

The news gets worse…

Three million years ago when temperatures were a few degrees warmer than they are now, the seas were 16m higher.

That’s the conclusion of a new study which looked at deposits left in coastal caves inundated during the Pliocene.

“Constraining models for sea level rise due to increased warming critically depends on actual measurements of past sea level,” said researcher Victor Polyak of the University of New Mexico.

“This study provides very robust measurements of sea-level heights during the Pliocene.”

Between 3 million and 3.2 million years ago, temperatures were about 2C to 3C warmer than they were before the Industrial Revolution.

“The interval also marks the last time the Earth’s atmospheric CO2 was as high as today, providing important clues about what the future holds in the face of current anthropogenic warming,” said University of South Florida geoscience professor Bogdan Onac.

Since the revolution, the Earth’s atmosphere has risen about 1C. If it keeps rising, scientists predict there will be stronger storms, increasingly erratic weather and more droughts.

Sea levels will rise as the ice sheets melt, and due to thermal expansion – warm water takes up more room than cold.

Even if humanity managed to halt the rising temperatures where they are now, the scientists behind the new research say a sea level rise between 5.6m and 19.2m could still happen, based on their measurements.

…and this is all happening far faster than the predictions…

‘A SIGNAL FROM CLIMATE CHANGE’: EUROPE HAS BECOME MUCH HOTTER THAN PREDICTED OVER THE LAST 70 YEARS

Parts of Europe are warming faster than climate models have predicted, with the continent experiencing a spike in the number of days with extreme heat, scientists have said.

According to a study published in the American Geophysical Union journal Geophysical Research Letters, the continent has experienced a series of “high-impact heat extremes,” over the past two decades as the world warms.

A team of researchers led by Ruth Lorenz from the Swiss Federal Institute of Technology in Zurich, Switzerland, found that on average the number of days with extreme heat and heat stress—a measure combining temperature and humidity—in Europe more than tripled between 1950 and 2018, while extremely hot days have become warmer by 2.3 degrees Celsius (4.14 degrees Fahrenheit.)

The study also found that European summers have become hotter overall while winters also warmed and saw a 50 percent reduction in extreme cold days over the course of the study period. Furthermore, cold extremes have warmed by more than 3 degrees Celsius, according to the researchers.

The team say that cold and hot extremes have warmed at about 94 percent of weather stations, indicating that the rises were caused by a warming climate, not natural variability.

“Even at this regional scale over Europe, we can see that these trends are much larger than what we would expect from natural variability. That’s really a signal from climate change,” Lorenz said in a statement.

The latest findings come during a summer which has seen heat records smashed in Europe. France recorded its hottest day ever—46 degrees celsius (114.8 degrees Fahrenheit)—near the southern city of Montpellier on June 28 during a heatwave which struck the continent at the end of that month, according to Meteo-France.

…the current political spectrum in New Zealand can not radically adapt fast enough to adopt the changes we must make if we are to survive what is coming. It will require a radical Political Movement that elects a Party to implement Fortress Aotearoa…

The revolution is coming whether you are personally ready for it or not.