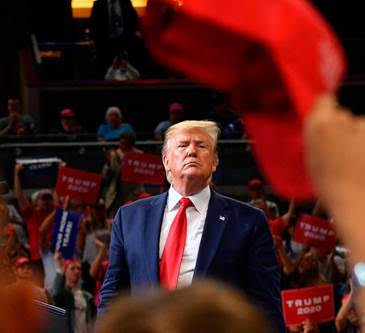 BEFORE NARNIA THERE was Charn. Mighty Charn, which fell at last because Jadis, its final Queen, was willing to utter the “Deplorable Word”. C.S. Lewis describes the scene in his “prequel” to The Lion, the Witch and the Wardrobe, The Magician’s Nephew.

“The last great battle”, said the Queen, “raged for three days here in Charn itself. For three days I looked down upon it from this very spot. I did not use my power till the last of my soldiers had fallen, and the accursed woman, my sister, at the head of her rebels was halfway up those great stairs that lead up from the city to the terrace. Then I waited till we were so close that we could see one another’s faces. She flashed her horrible, wicked eyes upon me and said, ‘Victory.’ ‘Yes,’ said I, ‘Victory, but not yours.’ Then I spoke the Deplorable Word. A moment later I was the only living thing beneath the sun.”

Written in 1955, as the Cold War was fast freezing the world into a seemingly permanent balance of terror, Lewis’ Deplorable Word did not require too much in the way of effort to decode. What else could he be thinking of but the growing global stockpile of nuclear weapons? Clearly, Lewis was convinced that even if a war between the superpowers began with conventional weapons, it would inevitably be ended by their doomsday devices. Whichever side found itself facing inevitable defeat would, like Queen Jadis, insist on having the last word – even at the cost of all life on Earth.

Now, in 2019, with the Cold War a distant memory, it is possible to read another meaning into Lewis’ Deplorable Word. Before making the attempt, however, let’s hear some more about it from the mouth of the evil Queen:

“That was the secret of secrets,” said the Queen Jadis. “It had long been known that there was a word which, if spoken with the proper ceremonies, would destroy all living things except the one who spoke it. But the ancient kings were weak and soft-hearted and bound themselves and all who should come after them with great oaths never even to seek after the knowledge of that word. But I learned it in a secret place and paid a terrible price to learn it.

Those weak and soft-hearted kings of Charn did not want to die, but, being wise, they knew that, in the end, Death comes to us all. Of much more importance to them was their posterity. Charn was a mighty empire: the crowning achievement of their world. Keep it alive, and with it all the many and mighty accomplishments of its living people. That was all that mattered. That was why they did all they could to prevent the Deplorable Word from ever being spoken.

Though he is very far from resembling the beautiful and terrible Queen of Charn, the present President of the United States, Donald Trump, shares her pathological hunger for recognition and power – even at the cost of the American republic’s utter destruction.

Trump uses these words in exactly the same way as Jadis used her single word. To win – no matter what the cost. He knows the power of words. He understands the damage they can do. The bitter divisions they can open up. The fear they can inspire. The lust to inflict harm which they can trigger. But, like Queen Jadis, he doesn’t care. America must he his – even if he’s the only person left standing who doesn’t feel duped and sullied and robbed of everything they held dear.

The terrible magic he has unleashed on the four congresswomen of colour is proof of just what a powerful political wizard he has become. First he singles out the women as enemies of America, and then, when their Democratic Party comrades hasten to their defence, he turns their gestures of solidarity into evidence of treason. See how far the stain of “radical socialism” has spread, he tells his baying supporters. “Throw them out!” they chant. “Throw them out!”

The American presidents who came before Trump knew the power of these deplorable words, which is why they foreswore them. Such fastidiousness strikes Trump, just as it struck Queen Jadis, as “weak and soft-hearted”. If the only object of the game of power is to rule, then what does it matter if everything of value in the republic you have made your own has been destroyed?