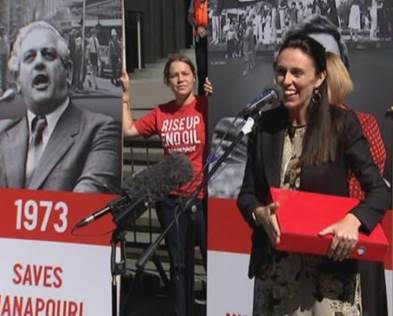 JACINDA ARDERN HAILS her government as the most committed to delivering progressive change since the mid-1970s. In other words, since the Third Labour Government of Norman Kirk and Bill Rowling (1972-1975). Before assessing whether or not the Prime Minister’s claim is true, it is worth considering what on earth possessed her to make it. What would make the leader of this Labour caucus – so very different from the caucus Norman Kirk presided over in the heady days following the 1972 election – so eager to assert her government’s close kinship with the Labour Party of the early 1970s?

Part of the answer must surely lie in the deep political impression which the Third Labour Government left upon those who were there at the time. Among left-leaning Baby Boomers, in particular, Norman Kirk and his government still elicit strong emotions. After twelve long years of National Party rule, its palpable political energy jolted the country awake in a way that was entirely new to a generation which had almost given up on the idea that conventional politics could usher-in genuine change.

It makes sense for Labour’s campaign strategists to associate Ardern with Kirk. The Baby Boomers are conscientious voters. If they can be persuaded to see Jacinda as the re-incarnation of “Big Norm”, then those who remember the tragic fate of his government will want to do everything they can to ensure that hers does not share it. Kirk died in office, and Labour was thrown out after a single three-year term. Over the years, many members of the Baby Boom generation have asked themselves: How might New Zealand have fared if Kirk had lived and Labour had won a second term? Encouraging these voters to hope that, somehow, re-electing Jacinda will show them, isn’t a completely stupid idea.

The other, slightly scarier, explanation is that Jacinda and those around her actually believe they are presiding over a government every bit as progressive as Kirk’s and Rowling’s. With so few of her key advisers and most trusted colleagues being old enough to have experienced the Kirk years (such people would need to have been born around, or before, 1955, making them 60+) it will be difficult for them to grasp just how radical was the political disjuncture between the New Zealand that existed before 1972, and the New Zealand that came after.

If Jacinda’s coalition government really was the progressive equal of Kirk’s, then it would have behaved very differently in the 100 days following its formation. Kirk, like his counterpart across the Tasman, Gough Whitlam, wasted no time in announcing a complete withdrawal of troops from Vietnam; abolishing compulsory military training; and recognising the People’s Republic of China. These were all commitments he had made while in opposition, and he lost no time fulfilling them in government. The equivalent moves by Jacinda would have been to withdraw New Zealand from the Trans-Pacific Partnership; order an immediate halt to all oil and gas exploration; and repatriate immediately all New Zealand military personnel serving in Afghanistan and Iraq.

Jacinda’s supporters will, of course, object that two out of three ain’t bad. Except, her government’s oil and gas announcement is a post-dated cheque, not a decision with immediate effect. Similarly, with Iraq and Afghanistan. In deference to our “very, very, very good friends” New Zealand’s withdrawal has been staggered over three years. The less said about the TPPA (sorry, the CPTPPA!) the better.

And this, of course, is the fundamental difference between the Kirk/Rowling Government and Jacinda’s. Such decisions as the PM and her colleagues have made all tend toward the tentative, small steps of the preternaturally cautious. Entirely lacking is the bold, unequivocal gestures that distinguished the Third Labour Government. Kirk’s decision to send a frigate to the French nuclear testing ground at Mururoa. His cancellation of the 1973 Springbok Tour. Labour’s bold steps in public broadcasting. It’s economy-transforming superannuation scheme. Bill Rowling’s green-lighting of Matt Rata’s revolutionary Waitangi Tribunal. Kirk’s Government didn’t have to call itself “transformational” – it simply got on with the job of transforming New Zealand.

Perhaps the greatest contrast between these two governments, however, lies in the field of housing. The Third Labour Government’s record here is outstanding. In just three years many thousands of houses were constructed and/or financed by the state. The housing shortage, which loomed as the 70s began, was answered by Kirk and his ministers as emphatically as Michael Joseph Savage and John A. Lee responded to the housing crisis of the 1930s. The Kirk’s Government built houses for Kiwis. Jacinda’s has given them KiwiBuild – which is not quite the same thing.

In one respect, however, Jacinda’s government is comparable to Kirks. Not in the policy sense, but in terms of its heterogenous political composition. The Labour Party of the 1970s was a very broad church, encompassing everyone from rabid anti-communists, to American-style liberals, to avowed socialists. Jacinda’s coalition encompasses a very similar political assortment. From the social conservatives and economic radicals in NZ First, to the social liberals in Labour and the Greens. (Direct descendants of the ground-breaking Values Party which was also an artefact of 1972.)

And yet, even here, the comparison falters. Norman Kirk bestrode his party like a colossus. He kept a copy of Labour’s manifesto at his elbow in Cabinet meetings – and woe betide the minister who attempted to deviate from it. Jacinda does not command her government in anything like the same way. What she does is front it. Spectacularly well, it must be said, but only in the way that a ‘method’ actor is spectacularly good. She has the same instinct for the camera; the same ability to deliver her lines with gut-wrenching conviction.

Norman Kirk wrote his own.