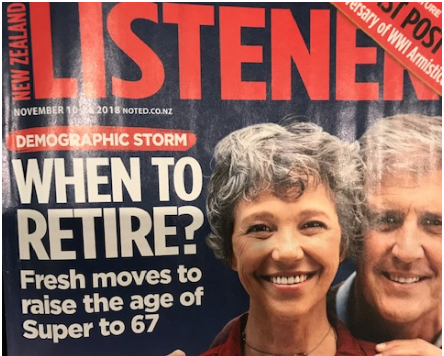 The latest Listener (Nov 10) proclaims “Fresh moves to raise the age of super to 67”.  I like the Listener but this article is at best misleading.

The Labour-led Government has given no indicaton that it is considering raising the qualifying age. In fact it has locked itself into promises not to raise the age. The Listener points to the NZ First’s private member’s bill just drawn from the ballot.  Yet this bill has nothing to do with raising the age. It is about raising the residency threshold required for NZ  Super to prevent people coming from overseas and getting the full age pension after only 10 years.

The Listener highlights the “growing  number of pensioners who struggle to live on NZ Super alone” and in a non sequitur seems to suggest that the answer is to raise the age to 67.  Many low income pensioners eke out NZ Super with part-time work, and cannot and probably should not work full-time. If there is no basic age pension income until 67, many more will reach the higher age even more impoverished. 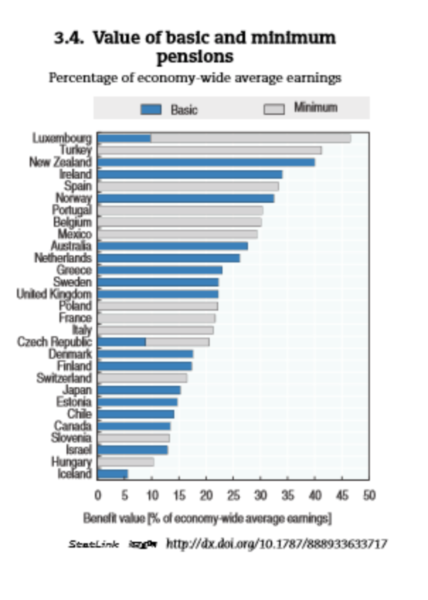 In spite of the hype of the age going up already in selected countries, the OECD report cited actually says that by 2060 the average age will be 66.  In Ireland, where the age is already 66, there is real anxiety about it going up to 67 in 2021 and 68 in 2028  as old age poverty is already a problem there and women are especially affected.

The Listener article claims that we have one of the most ungenerous pensions in relation to the average wage. To support this proposition the article cites the Netherlands as having a pension over 100% of the average wage. However, that happy outcome is for a person who has not only fulfilled the 50 years of residency for a full basic pension but has made contributions to an occupational scheme for  a full-time, 40 year career at the average wage.

The OECD actually shows that New Zealand has one of the highest basic pensions (see Figure) at 43% of the average wage for a single living alone recipient. Because of low residency requirements and its universal character, NZ Super is one of the most generous basic pensions in the OECD.

There are very important social aspects to having a basic income for everyone at age 65. In this simple visionary idea New Zealand leads the world, allowing many of those over 65 to contribute to the critical voluntary unpaid activities such as caregiving, mentoring, and support of NGOs without which society would not function.  Perhaps Labour’s well-being budgets will properly value this contribution?

People are quoted in the Listener article saying that they love working into older age as it gives them a sense of pupose. There is nothing intrinsically better about paid work and many people find a freedom and satisfaction in doing the work they love if they can do it without having to worry about not being paid.

The underlying issue the Listener raises is whether we can we afford New Zealand Super. As Michael Littlewood says, New Zealand spends only around 4% of GDP on NZ Super and while this will rise, at its peak it will be still well below the pension spending of many other countries today. We don’t spend very much in subsidising private provison either. KiwiSaver subsidies are very minor compared to other countries’ expensive tax breaks for private saving.

To think that raising the age is some kind of fiscal saviour overlooks so many qualifiers. Importantly, as National discovered when they tried to do this, it needs to occur gradually over a long time period for poltical accpetance and to give people enough time to adjust.  National’s plans would have seen 67 years reached only by the year 2037. Fiscal savings would be miniscule for the first decade and even then the savings needs to be tempered by the additional spending in the welfare system for the many unable to work full-time.

What is the actual problem to be solved? Perhaps it is a simple one of social equity. Many of working age have little chance of accumulating a supplementary nest egg that will cover the needed extra $270 a week the article claims is needed for a good retirement.  All the while, these same working age people are taxed to pay for NZ Super for today’s wealthy superannuitants who may also still be working in highly paid jobs. Today’s taxes also contribute to the New Zealand Super Fund for a pension that may be harder for todays’ working age to access especially if the age is raised.

For most wealthy superannuitants NZ Super is a drop in the bucket. They don’t notice it. They certainly didn’t need the  expensive Winter Energy Payment. It is possible to devise a higher tax rate for the very well-off that could provide useful saving of at least 10% of the total NZ Super cost without causing anyone hardship. A   Retirement Policy and Research Centre paper shows how NZ Super could be changed to a basic income, the same non taxable grant for each person over 65, with a separate tax scale for other income. Around $1 billion a year could be saved very easily.  But this is just one potential option. First we need to agree what the problem is that we are trying to solve.

Raising the age a little is perhaps inevitable over the long term as people live longer, but it is no answer to actual problems ordinary people face.  Let’s hope the promised retirement incomes review in 2019 does justice to examining all the options for sustainability, fairness and affordability without just relying on the chimera of raising the age of entitlement.