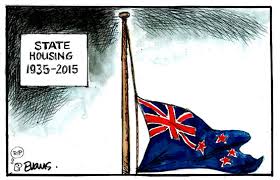 Housing Minister Phil Twyford has released a “sobering” stocktake on housing which has found homelessness was worse than thought and there was a growing “floating” population of people in insecure housing.

It warned that New Zealand was “quickly becoming a society divided by the ownership of housing and its related wealth”.

It also showed home ownership had slumped dramatically since the 1980s – especially among Pacific and Maori people – and Auckland’s housing problem was created by a mix of population growth, partly fuelled by migration, and the construction and land development sectors “hindering” housing affordability.

It also pointed to a potential time bomb in the impact on housing affordability on the elderly, finding the proportion of older people who were living in mortgage-free homes had dropped from 86 per cent to 72 per cent since the 1980s.

…here is the thing I just can’t comprehend.

How the fuck did it get this bad without the mainstream media screaming about this for 9 years?

How come an avalanche of social damage can build over 9 years and collapse without the mainstream media of NZ noticing for almost a decade?

Where was the critical analysis of National? Where was the holding the powerful to account? Well if you have a neoliberal media who conform to neoliberal cultural mythology of individual success, they can never challenge the right wing Government of the day.

The same panelists and pundits all vetted for their conformity to the neoliberal cultural myths alongside journalists who don’t rock the boat creates a complacency of opinion that misses and can not comprehend the reality until it explodes in reports like this one.