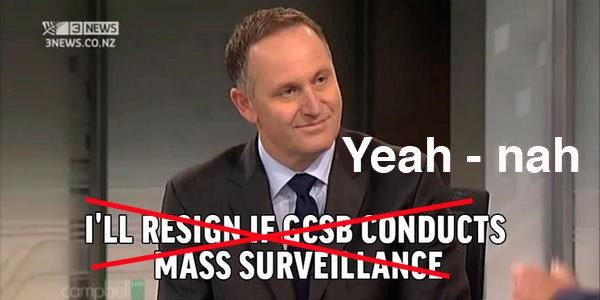 When New Zealand amended the Security Intelligence Service (SIS) Act in 1996, it was the first significant change in almost 20 years. The 20 years since that amendment have seen a constant stream of law changes extending the powers of the country’s spies. The Intelligence and Security Bill currently before Parliament is the latest of these. In this series of three articles, I outline why I think this Bill represents the most disturbing attack to date on the rights and freedoms of New Zealanders. Part two traces two decades of intelligence and security legislation from 1996 to 2016.

Part Two: Spy Agencies Become a Law Unto Themselves

The attack on the twin towers on 11 September 2001 was a game changer. Nine days after the attacks US President Bush II declared a “war on terror” and issued a global ultimatum:

New Zealand signed up immediately. It took just a few weeks for the Terrorism (Bombings and Financing) Bill to be introduced and by the end of November Parliament was considering the main war on terror legislation, the Terrorism Suppression Bill. The Select Committee considering the Bill recognised that their task was to balance the needs of national security with the protection of individual freedoms. They acknowledged public unease about the Bill and responded by travelling the country to hear submissions in person. What we ended up with was legislation which, though flawed (for example, “terrorist act” and “classified security information” were too broadly defined), was more benign than the laws being introduced in many other countries.

Before long, however, New Zealand was being leant on to move that balance away from individual freedoms and towards national security. Except that increasingly it became global security – the line being that the world is only as safe as its weakest link. What this has meant for New Zealand is that over two decades, our laws have become a more and more disproportionate response to the actual threats faced in New Zealand. So although there has been no demonstrable increase in risk the resources and invasive powers of the intelligence agencies have steadily increased.

This process have faced two main difficulties: the lack of public fear of terrorism; and the negative reputations of the intelligence agencies. The importance of fear was acknowleged as early as 2003 when the Controller and Auditor-General wrote:

“The infrequency of domestic security incidents can also make it difficult to maintain public support. This is especially the case when initiatives to deter threats are likely to impinge on business interests or the freedoms people enjoy… The greater the length of time between security incidents, the greater the likelihood of reduced public consciousness of the threat, and the more likely people will be to perceive precautions as excessive.”

“Security incidents” have been pretty thin on the ground in New Zealand. And the two incidents that looked for a while as though they might have increased public feelings of anxiety and insecurity ended up backfiring badly.

The first was the dramatic headline that the SIS had caught a real live Islamic terrorist trying to enter the country. Ahmed Zaoui was jailed and the SIS refused to even tell him what he was accused of. Years of legal wrangling eventually forced them to produce some evidence which ludicrouly included a holiday video – clips that looked like well-known tourist sites but that the SIS insisted were soft targets for terrorist attacks. It took five years for the government to admit the SIS got it wrong and accept that Zaoui was a genuine refugee fleeing political violence in Algeria. The shameful saga ended up reinforcing the public perception of the SIS as an incompetent, untrustworthy organisation that saw itself as above the law.

The other operation that claimed to have thwarted a terrorist plot was the series of raids in October 2007 centred on what were said to be terrorist training camps in the Urewera Ranges. The raids involved hundreds of police, intelligence agents and counter-terrorism units operating under the Terrorism Suppression Act, although no terrorism charges were laid. The Police, who were found to have acted unlawfully, later made a formal apology to Tuhoe for their actions. The headline that there were terrorists operating in New Zealand turned out to be another false alarm.

In the absence of actual incidents, the spy agencies have tried to manufacture them. In 2015, for example, the public was fed the “jihadi brides” story about New Zeland women travelling to conflict areas to become wives of Islamic militants. It turns out the two unnamed women did not leave from New Zealand but were among the 650,000 New Zealanders living in Australia.

Talking up the Threat Level

Another way the government tries to talk up the risk of terrorism is by manipulating the “domestic threat level”. Threat level is an opaque measure that relies on secret information provided by intelligence agencies. The irregular timing of its release appears based on political expediency. This means that the public is only ever told about increased threat levels. Although New Zealand’s threat level was officially described as “low” in 2006, it has miraculously increased from “very low” (highly unlikely) to “low” (possible but unexpected) twice since then. I can find no report of our threat level over the last 20 years ever being described as “very low” and no record of our threat level dropping. Yet when the government announces an incresed threat level, the media uncritically report it.

The last time the threat level “increased” from very low to low was in late 2014 when it was used to justify a new law with the scary name of the “Countering Terrorist Fighters Legislation Bill”. Among other things, this Bill gave the SIS the new invasive power to enter private property without an interception warrant. The public consultation period for this major increase in the powers of the SIS was just 48 hours. Not a typo – two days for public submissions! Why was it so important and so urgent? Because New Zealand’s threat level had just increased from very low to low.

One thing that has remained largely unchanged during from the constant amendments to the terrorism laws is the accountability of the spy agencies. The non-existent protections that were there in 1996 are still there today. The SIS is supposed to report to the Intelligence and Security Committee. But they know as little today as when they were unaware that the SIS had an open file on Green MP Keith Locke. They only ever hear what the SIS Director allows them to hear.

Who are they Answerable to?

Even the Prime Minister, the one person to whom intelligence agencies are supposed to be accountable, is often left in the dark. Although David Lange was Prime Minister, he didnlt find out about aspects of the Government Communications Security Bureau (GCSB) until he read them in Nicky Hager’s 1996 book, Secret Power. Lange wrote:

“It is an outrage that I and other ministers were told so little, and this raises the question of to whom those concerned saw themselves ultimately answerable.”

What Hager had revealed was that the GCSB’s eavesdropping operation based around bases at Waihopai and Tangimoana was part of ECHELON, a global network of electronic spy stations run by the Five Eyes powers (US,UK, Australian, Canada and New Zealand). When this was exposed, New Zealanders were continually reassured that we had nothing to worry about because the law governing the GCSB clearly stated that it could not spy on New Zealanders. But then in 2012, as a result of the legal case around Kim Dotcom, it was discovered that Dotcom was one of up to 85 people illegally spied on by the GCSB over the previous nine years.

As with the SIS in 1996, the GCSB’s defence was to claim that they thought they were acting lawfully. Again like 1996, the government response was to defy widespread public outrage and give the GCSB new powers to spy on New Zealanders.

Modern communications are increasingly digitized and susceptible to surveillance. In the US, Edward Snowden revealed that communications are being systematically monitored by the NSA on a mass scale. New Zealand’s spy agencies have the technology to do this too. The SIS and GCSB also have form for running political agendas, targeting people who are exercising their basic democratic rights, acting outside the law, and having no proper accountability or oversight mechanisms to the public or our elected representatives.

The New Zealand Intelligence and Security Bill proposes to significantly increase their capacity to be a law into themselves and get away with anything.

David Small is a lawyer and a Senior Lecturer at the University of Canterbury. One of his areas of research is the balance between national security and civil liberties. In 2011, he was Fulbright Senior Scholar at Georgetown University Law Center studying alternative approaches to anti-terrorism for low-risk countries. He has made submissions on virtually every piece of New Zealand legislation impacting intelligence, security and surveillance since the 1996 NZSIS Amendment Act.