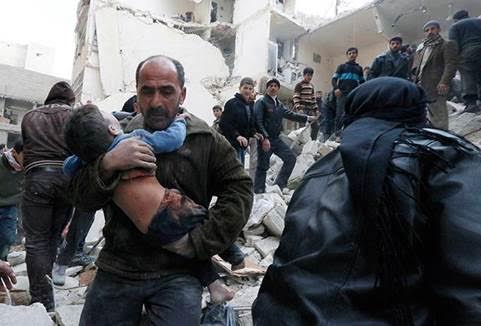 AVID FANS of the US television series Homeland are already familiar with the drill. People in the White House, people in the Pentagon, people in the State Department let it be known to people working in the Central Intelligence Agency that certain things must be made to happen. None of these people will ever tell (or admit to) the world what it is that they want to make happen. That’s because what the US actually wants to happen is very often the opposite of what the US says it wants to happen. And that, of course, is the whole point of an outfit like the CIA. It allows the American Government to enjoy its diplomatic cake while blowing everybody else’s cake to Kingdom Come.

Take Syria, for example. In the earliest days of the uprising that became the Syrian Civil War the CIA was hard at work on the ground. It’s job was to build up the armed resistance to the regime of Bashar al-Assad as quickly as possible. Money and weapons flowed freely – even though the CIA’s knowledge of exactly who it was funding and equipping was, at best, sketchy. At worst, the CIA helped to funnel American aid to individuals and groups who had a much greater interest in Salafist Islam than they did in liberal secular democracy.

Of course the creation of a liberal secular democracy was not the real reason the CIA was in Syria. The real reason they were working so hard to make civil war inevitable was because they wanted to prevent Syria and its neighbours, Lebanon and Iraq, from getting any closer to the Islamic Republic of Iran.

In pursuing this objective the United States wasn’t only acting in its own interests, but also in the interests of the governments of Turkey, Saudi Arabia and Israel.

Turkey was paranoid that the quasi-autonomous Kurdish enclave in Northern Iraq might one day morph into an independent Kurdistan. Such a development would make the task of repressing its own Kurdish minority ten times harder.

Saudi Arabia was determined to free the Sunni Syrian majority from the tutelage of Assad’s Shi’a allies – thereby preventing the creation of a powerful and antagonistic crescent of Shi’a-dominated states stretching from the Pakistani border to the Mediterranean Sea.

Israel’s motives for fomenting an intractable civil war may have been no more reputable than preferring a Syria racked by the agonies of civil and religious strife, to a Syria peaceful and prosperous enough to once again attempt to acquire weapons of mass destruction. Once again? Oh yes, in the early 2000s the Assad regime, with help from the North Koreans, undertook the construction of its own nuclear reactor. In 2007, Israeli jets blew the reactor to smithereens before it could come on line.

The motives of the people in the White House, Pentagon and State Department were much the same as the Israelis. US strategic objectives in the Middle East have been remarkably consistent since the end of World War II. First and foremost there’s the region’s oil reserves. These must, at all costs, remain under the control of regimes friendly to the United States. Even the remotest possibility that the emergence of a dominant regional power, or combination of regional powers, might threaten US access to Middle eastern oil is to be “terminated with extreme prejudice” (as they say in the CIA).

So, the next time you’re wincing at horrific images broadcast out of East Aleppo, ask yourself why the civilian population hasn’t left the war zone for somewhere safer. While you’re at it, you might also ask yourself how it is that the Jihadis dug into the rubble never seem to run out of arms and ammunition. And, why it is that only the Assad Government and its Russian allies are being ordered to stop the shelling and the bombing of civilian targets?

Could it be that the men, women and children under fire in East Aleppo are much too valuable to the Jihadis as human shields to be allowed to leave their shattered homes? Or is it simply their immense value as propaganda weapons? Especially East Aleppo’s children, whose tiny broken bodies are beamed into the living-rooms of Western households practically every night of the week. Absent from our news bulletins, however, are the images of the men, women and children being killed by the Jihadi artillery shells exploding every day in the streets of West Aleppo. Funny that.

The US Secretary of State, John Kerry, just like his predecessor, Hillary Clinton, may say America wants peace in Syria. But if that was really the case, then the US Government would have ordered the CIA out of Syria, and stopped shipping arms to the rebel units dug into the rubble of East Aleppo. If ending the Syrian civil war was America’s true objective in the Middle East, then it would be making peace at the side of the Russian Federation – not casting it as the principal obstacle to a successful resolution of the conflict.

What makes the Homeland series so compelling is the howling moral vacuum at the heart of American foreign and defence policy. It sucks the characters into its emptiness and leaves them breathing dirt in the dark. They are expendable instruments who would like to do good, but can’t. Because doing good is not what serving a superpower is all about.

President Ronald Reagan may have presented America as “a shining city on a hill”, but it was Richard Nixon’s Secretary of State, Henry Kissinger, who came closest to describing her true character. “America”, he said, “has no friends – only interests.”

Remember that next time you watch the news.