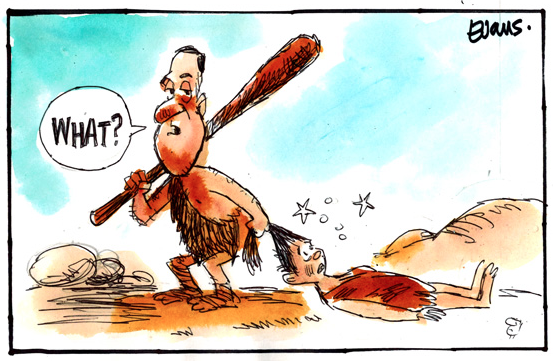 John Key draws flak after questioning why waitresses’ taxes should fund students
Prime Minister John Key has drawn a barrage of criticism after questioning if Labour’s fee free study policy was fair on waitresses who would be paying tax to subsidise students.

Before we answer why waitresses’ should pay for university students education, let’s ask that waitress some other questions first!

“Why should a waitress have to put up with being touched on 10 separate occasions by the Prime Minister’?

“Why should a waitress lose her job because he bullies her”?

“Why should young women be touched at work by powerful men’?

How dare this sanctimonious smug clown use waitresses as his example!

A waitress should be happy to help pay for higher education because they themselves might be able to benefit from it as well! Also, less student debt means the waitress won’t be paying more for the services of those university students who won’t be needing to pay off their loan!

That he can’t even see how damaged his example is by his own weird behaviour is an indictment on his judgment.