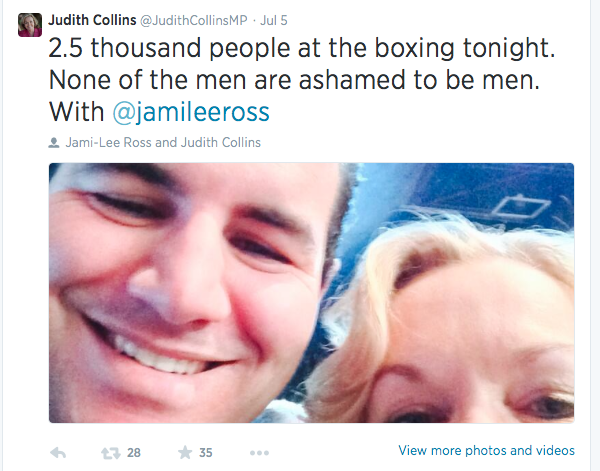 When I was 15 my cousin who lived with me and my mum would come home black and blue. Her dealer and boyfriend, Nick Ge used to beat her for whatever reason, for whatever justification he saw fit. Men who abuse always have excuses for their violence. One time he pushed her to the floor, yanked her arm up and used it for leverage while he stomped on her body from her thigh up to her neck – you could see the marks from the sole of his boot on her body. When my mum reported his crimes to the Howick police they barely did anything. We found out years later that the Police had Nick Ge on their pay roll as a paid police informant. The police where protecting an abuser.

My cousin never got an apology from the police, from her abuser, from anyone.

Last Friday, David Cunliffe apologised for being a man at the Women’s Refuge’s Symposium. He said men everywhere should feel ashamed of the epidemic levels of violence women face globally. John Key said in response that it was a “silly comment”. Cunliffe’s apology was not “silly”. His words take responsibility for the implicit role that all men play in either preventing violence against women, or perpetuating it. Silence can be deadly. Violence and rape is first and foremost a men’s issue; women are not beating or raping themselves. But it is nearly always women that take up the cause of violence prevention. Cunliffe is right. It is time for all men to “wake up, stand up, and man up and stop this bullshit”.

As I write this I am so tired. I am tired of repeating myself. Tired of having to explain why the “not all men” arguments are damaging and not a legitimate or helpful response to discussions about violence against women. There are women on this planet who have had legs ripped out from their sockets while being raped. There are women who have been beaten so badly they have not survived. My friend was hit so hard one time she shat herself. It is hard to say anything new about the same old issues when so few people hear the voices of those who have survived. When change is incremental. When the response is so often “…not all men”. Yeah. Moving on.

When Cunliffe said sorry, some saw it as an attack on masculinity. Judith Collins, Minister for Justice (I tried not to laugh as I typed that) tweeted the following last Saturday night:

Cunliffe apologising for being a man and feeling ashamed of violent men’s actions is not an attack on masculinity. It is David publicly questioning and challenging us to think about what masculinity represents and what it means in the context of New Zealand culture. This is something we desperately need. I called for exactly this when I recently wrote on the toxic masculinity displayed by the gang rapists known as The Roast Busters. Men who rape and are violent are not aberrations. Men like those in The Roast Busters are socialised into believing a woman’s body is their sexual entitlement. This belief is shaped by a culture and a media that objectifies women’s bodies, that normalizes sexist language that plays down rape and abuse. New Zealand rape culture is a serious public health issue. As Rape Education prevention reported on their website,

Abusive, sexist men need to lose status. Let’s start by creating a counter climate  in which we, in our communities, call bullshit on other people who behave in sexist and violent ways. Cunliffe saying men should be ashamed of masculine violent behaviour was not an attempt to incite collective guilt. It was a call for collective consciousness and personal ownership of the epidemic levels of violence that women around the world face. To read it any other way is to buy into our mainstream media’s agenda, which nearly always attempts to distract us away from issues pertaining to violence against women. We are smarter than this.

John Key said, “Is he [Cunliffe] going to go down to the local rugby club and get up and say ‘I’m sorry for being a man’? I don’t think so”. This statement is evidence that Key himself adheres to damaging, negative stereotypes of masculinity – these stereotypes intersect with violence against women. Key said Cunliffe’s words were insulting to men in New Zealand. This is a silly comment. The real insult is Key insinuating that men who play rugby or who like rugby (New Zealand culture epitomises this sport as a definition of manliness) would not react well to a man like Cunliffe calling on men to stand up and join women in the fight to end violence against us.

One billion women on this planet have survived violence. One billion women are living with the aftermath of this violence; the PTSD, the nightmares, the anxiety, the isolation, the shame and stigma… the blame. When a man says sorry for the abuse women have survived, why do so many people and media sources run to defend “good, non-violent men” everywhere, but when a woman has the courage to speak about surviving her own rape or surviving violence she is shamed? Why is she asked “What where you wearing?”, “Were you drunk?”, “Did you say no?”, “Did you deserve it?” Why does no one run to her defence?

Only a rape survivor would be put on trial for her own rape.

Where is the public outcry for women who have survived gendered violence? Where is the condemnation for the everyday sexist acts and language used against women that create a climate in which some men think raping and/or hitting women is okay – It is how you prove your masculinity? But please, by all means Mr. Key and New Zealanders everywhere, continue to be offended by Cunliffe’s apology. Continue to believe the “not all men” arguments are completely valid and justified reactions to both Cunliffe’s apology and discussions around violence against women. I have lost my patience. I refuse to pander to these arguments anymore. They are not adult conversations. I have had enough.

John Key wondered “is he [Cunliffe] really sincere about that statement?” when talking about Cunliffe’s speech at the Women’s Refuge Symposium. How dare John Key call the sincerity of Cunliffe’s words into question, when Key and his Government have so little compassion or understanding for the survivors of sexual assault? When his Minister for Foreign affairs, Murray McCully, failed to protect Tania Billingsley, the woman at the centre of the Malaysian diplomat case which is currently unfolding? On 9 May 2014, Muhammad Rizalman bin Ismail, the Malaysian diplomat in question, was arrested and charged with burglary and assault with intent to rape after allegedly following Ms Billingsley home. Both Murray McCully and John Key failed to take the alleged sexual attack on Billingsley seriously, which allowed Ismail to flee back to Malaysia.

Governmental incompetency allowed Muhammad Rizalman bin Ismail to slip away under the guise of diplomatic immunity; this is a classic example of our state system and how it views sexual crimes. McCully could not even find the courage or the character to apologise to Tania personally, instead he apologised for his mistake to the New Zealand public and John Key. Months later Tania’s official written apology is “in the post”.

Perhaps Key does not know what a sincere apology looks like because his own Minister for Foreign Affairs cannot give one.

Women’s Refuge Chief Executive Heather Henare said Cunliffe’s words were “gutsy”. Many of my friends who are feminists and allies said his speech was “brave”, but I disagree. His words were necessary. They are words all men need to hear and listen to. They are words which women everywhere who have survived rape and violence have been waiting for. Tania is brave for lifting her own name suppression, for speaking publicly about the sexual assault she survived, and for calling on McCully to resign*. Tania has written an essay  about rape culture in New Zealand and how McCully’s actions have impacted her. She wrote:

“Murray McCully – not only has watching and reading his response to my attack been incredibly hurtful and frustrating, I have also felt embarrassed for him. Watching a grown man try to talk his way out of responsibility at what is effectively failure at his own job is a painful thing to see. I can’t believe his incapability to admit a mistake and try to fix it rather than pointing fingers at everyone else.”

We live in society that does so little to support and protect those who have survived abuse and does so much to exempt and pardon those who abuse. Isn’t it time we challenged and changed this?

*I have launched a campaign and petition demanding that Murray McCully resign, you can sign the petition and get involved here