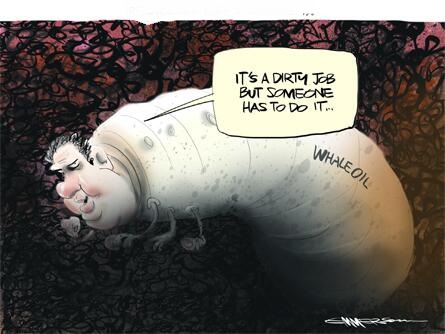 Whale Oil does it again. How many more times is he going to attack and discredit Tania Billingsley publicly? In a short blog published on Wednesday ‘Nothing to be sorry for‘ Whale Oil also known as Cameron Slater, is defending John Key in his refusal to say sorry personally to Tania for his fucking appalling handling of the Malaysian Diplomat case. Tania Billingsley reported to police in May of this year that diplomat Muhammed Rizalman followed her home, entered her house and then attempted to rape her.

Tania asked John Key for an apology as it was Murray McCully, John Key’s Minster for Foreign Affairs, who did not take the allegation seriously, allowing the diplomat to flee back to Malaysia. Although McCully could not have stopped the diplomat from going back to Malaysia without being in breach of international law, he could have asked the Indonesian government to wave diplomatic immunity. As RadioNZ reported Malaysia was prepared to waive his immunity, but still McCully failed to act. This inaction, as I have previously stated, is a classic example of our state system and how it views sexual crimes.

John Key said he would say sorry to Tania once he knew her name, he lied. If Key had said sorry it would mean he takes responsibility for governmental incompetency. Key apologizing to Tania would mean he admits to being wrong and behaving in ways that minimize rape and sexual assault, as Rape Crisis has said Key needs to take the case more seriously. When you minimize rape, when you do not take it seriously you trivialize, legitimize and normalize it.

In another blog published last week by Cameron Slater, ‘Tania Billingsley and the Green and Rape Crisis Fingerprints’ he not only denies the existence of rape culture in New Zealand when he said “I do not subscribe to the notion New Zealand has a culture of rape,” but also casts doubt over Billingsley’s alleged attack by the diplomat. This blog by Slater is an exercise in both victim blaming and rapist apologizing – all narratives that create rape culture; they are harmful and vilify the victim while pardoning the perpetrator. In his blog Slater effectively accuses Tania of baiting her attacker Muhammed Rizalman. Obviously, as women we like being raped so much we seduce our rapists into attacking us – this is victim blaming in the most disgusting sense. Slater mused,

Rape is fun “if you just ease into it and relax”.  In Slater’s world Tania has an agenda – this agenda is pushing and proving the existence of rape culture and obviously, pegging an attempted rape on an unwitting diplomat is the perfect scenario to do just that. Slater’s “proof” behind his position is that Tania knows Tabby Besley, who has previously worked at Rape Prevention in Wellington. She also contacted green MP and women’s rights activist Jan Logie for support and has previously spoken out against rape culture. Yeah, that is all the evidence he has. Move aside Sherlock Holmes.

Whale Oil claiming Tania has an agenda and needed to come up with an explosive way of proving the existence of rape culture is ridiculous. What are the Roast Busters proof of, then? Are they just an aberration? An anomaly? A gang of young men getting underage girls drunk and having sex with them, then boasting about it in youtube videos and online? Elliot Rodger’s who is responsible for the Visa Isle massacre in America, in which he shot and stabbed 6 people because “dumb blonde sluts would not sleep with him” spoke of his sexual self-entitlement to women’s bodies in a youtube video and a manifesto before he committed the Massacre. Like Rodger’s the Roast Busters held the same ideologies and beliefs; they believed women owe men sex.

Soon after the explosive news of the Roast Busters broke, two other 16 year old boys in New Zealand unrelated to the Roaster Busters, were arrested and eventually convicted of the same thing; getting an underage girl drunk and then taking turns raping her. After the girl was abused by each teenager separately and left naked in a bedroom, she was further humiliated by a group who came in with their cell phones lit up and touched her. In America the Steubenville rape has been dubbed the Abu Ghraib of rape culture. Two all-star footballers took turns raping a young girl who was comatose from alcohol consumption while many young men watched. They made jokes at the victim’s expense, filmed and photographed the assault on their phones and later uploaded them to youtube.

These sexist and misogynistic beliefs held by Rodger’s and the men involved in the Staubenville rape  are not just something that happen in far off countries, they are part of New Zealand culture; they are part of New Zealand rape culture. The Roast Busters and the two teenagers who raped a young girl are powerful evidence of this and I am not the only person who thinks so, thousands of people all over New Zealand took to the streets on the 16th of November of last year, to protest rape culture in the wake of the Roast Busters scandal.

John Key brushed off the actions of the Roast Busters by saying “these young guys just need to grow up” he may as well have said “boys will be boys” and be done with it – language which minimizes the actions of rapists is all part of rape culture.

If Tania needed evidence of rape culture, she already had it. Rape culture is all the things I have already spoken about; the minimizing of rape, victim blaming but it is also the daily catcalling by men of women on the street, it is the sexual objectification of women’s bodies and it is the denial of wide spread rape – something Slater seems so hell bent on doing.

Why would Tania need to create evidence of rape culture in New Zealand? When our own Prime Minister John Key has time and time again perpetuated rape culture himself.  He has done this by his refusal to apologize to Tania, with his minimizing of the Roast Busters actions and his governments slashing of funding to services that support victims of sexual assault, just recently Christchurch’s only Rape Crisis Centre had to close due to lack of funding. As Tania said in an essay she wrote in relation to her attack and in response to the government handling of the case, “We have seen this rape culture reflected in our own government’s response to my assault.”

Cameron Slater’s blogs are rife with sexism, homophobia, racism and transphobia – recently he wrote about Kelly Ellis who is transgender and a Labour MP and made fun of her genitals and body shamed her.  As Ellis said when I spoke to her, “This is just part of his [Slater’s] women-hating. He used me and my body to have a supposedly funny crack at gender equity within Labour’s caucus. His talk of my genitals is an attack on me and my privacy. No one should have to put up with that.” How low is Slater willing to go? Cameron Slater is not a journalist he is a conservative gossip columnist. His blog ‘Whale Oil Beef Hooked’ is the ‘News Weekly’ of the right wing. Denying the existence of rape culture may bring you comfort Mr. Slater but your comfort silences those who have survived sexual assault and rape.

This week Slater told Heather du Plessis-Allan of Seven Sharp that he talks with John Key all the time, after all best buds have to stick together. If anyone has an agenda here, it is Cameron Slater, and not Tania.