The Guerrilla Girls, an all-female anonymous feminist artist collective, were invited to form part of an exhibition at the Galerie Perrotin in Paris called   G I R L S, curated by pop singer Pharrell himself which opened on Tuesday. The show claims to “celebrate women who are above all free, liberated by artists and their boundless, unfettered imagination”.

The show is no doubt another of Pharrell’s attempts to distance himself from the controversy surrounding his “rapey” song, Blurred Lines, released in 2013. He attempted to do the same in his latest Oprah Winfrey interview , in which he waffled on and on about how “women are the creator” and that he truly meant no harm by his song, and feminists everywhere just misread him.  Sure Pharrell. Whatever you say.

The Guerrilla Girls accepted his invitation but insisted on exhibiting two new posters they had created. Pharrell, to his detriment, said yes. This is one of their posters in Pharrell’s exhibition:

Burn. That Pharrell, is what you call getting owned. As the Guerrilla Girls said on their website, “After watching lots of [Pharrell’s] videos we had a question for Pharrell: why DO WOMEN HAVE TO BE NAKED TO GET INTO MUSIC VIDEOS WHILE 99% OF THE GUYS ARE DRESSED? We did a remix one of our classic posters with a still from Robin Thicke’s Blurred Lines”.

If you are not familiar with the Guerrilla Girl’s work, they have been around since the 1980s and have dedicated the majority of their work and activism to pointing out how art institutions perpetrate racism and sexism. The remix of a classic poster they spoke to above is pictured below:

Naturally the Guerrilla Girls also turned their razor sharp wit to Galerie Perrotin with this poster: 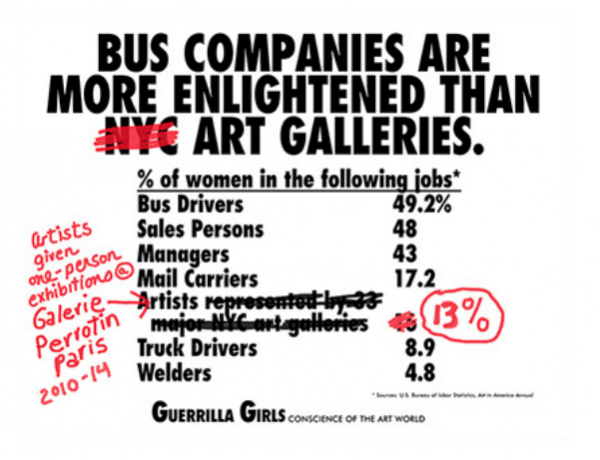 As the Guerrilla Girls astutely point out on their website “Sure, 50% of the artists in the G I R L exhibition are women, but since 2010 only 13% of solo exhibitions have been by women artists. We grafittied one of our early posters to show that not much has changed: BUS COMPANIES ARE STILL MORE ENLIGHTENED THAN ART GALLERIES”.

Ah, Pharrell. At least he has included some serious female heavy hitters in his show G I R L, who are women (not girls) such as Yoko Ono, Cindy Sherman, and Sarah Lucas. But he has failed to maintain gender equality in something aimed to celebrate women; of the 37 artists in the show 18 are female and 19 are male.

The issues with the show do not stop there; the decision to include fashion photographer Terry Richardson is baffling. Richardson’s image of a slice of a girl’s abdomen from belly button to upper thigh, a chocolate heart dangling in front of her vagina with the words “Eat Me” scrawled in pink alone is enough to undermine the show’s feminist theme. Then add in the fact that Richardson is facing widespread allegations of sexual assault and is known, as The Guardian suggested, as a “loathsome sexual predator”, then the message of female power in this show come to a screeching halt.

Really, Pharrell? You thought including this asshole was a good idea?

When journalist Sarah Moroz confronted Pharrell about his decision to include Richardson, he said “He has his own expression … What we were trying to accomplish with this project was to house many different facets of women,” then bizarrely went on to say, “Just because you’re a good girl doesn’t mean you don’t have naughty thoughts.” This is not the first time Pharrell has used this line to defend and justify his questionable, sexist actions. He said the exact same thing verbatim to Oprah in his previously mentioned interview when she questioned him in relation to writing, and then performing, the song Blurred Lines with Robin Thicke. A song that uses non-consensual language such as “I know you want it”, while half-naked girls dance around both men – who of course, are fully clothed.

My God, sometimes Pharrell should just not speak. No matter how much Pharrell tries to deny his obvious sexism – something to which he is completely blind, he never seems to miss an opportunity to say or do something stupid that is further proof of his own misogyny.