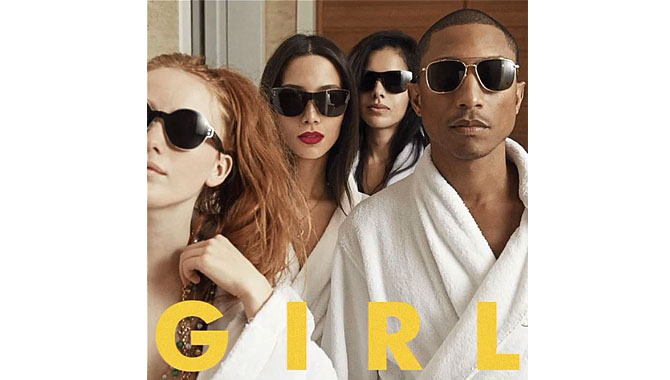 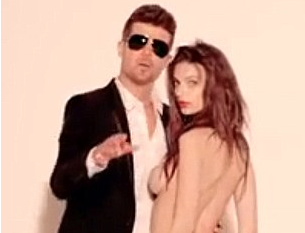 I think most people heard about how the song Blurred Lines featuring and co-written by Pharrell and performed by Robin Thicke (who has adeptly just been named “Sexist of the Year”) really pissed a lot of people off last year.  The controversy revolved around the lyrical content and the music video. There is something pretty wrong about three fully clothed grown men (T.I makes an appearance) singing violent lyrics like, “I’ll give you something big enough to tear your ass in two” while half naked or completely naked women dance around them. As Elizabeth Plank from Policymic points out, “that is all too common in our media landscape.”

In a nutshell, the video sexually objectifies women. The lyrics are “rapey” and blur the lines of sexual consent as countless social commentators and feminists point out.

Pharrell in a recent interview with Oprah Winfrey, wanted us to know we just totally misread his song (obviously),

“Blurred lines taught me something… what I learned was not exactly what you would expect; it wasn’t what some of the critics, the feminist women were feeling about it ‘cos I can explain that… most of them got the message that most women are good girls who have bad thoughts, so there is a blurred line… All I was saying [in blurred lines] was “that man” is not your maker, meaning he is not the creator and he is not a part of the evolution… he cannot give birth, he cannot make an egg… You don’t need no papers you are not a possession… and that was the point.”

Thanks for the lesson on what my reproductive organs can do Pharrell! I might have tried to, you know, not have children and follow one of my life’s ambitions of getting my PHD. But now that I know I am in fact The Creator, (that has a nice ring to it? Maybe I should give Mel Gibson a call and offer him the movie rights to my forthcoming pregnancy?) I should probably start squirting out babies as fast as I can. I have always wondered what it might be like to be god, now I might just find out. Anyway, apart from the fact Pharrell clearly does not understand evolution (it takes two to tango) he seems to be really struggling with understanding or even seeing his own misogyny. Misogyny is a deceptive thing, it can be really hard for people to identify misogyny in themselves. There is a fantastic analogy for this by Dr. Caroline Heldman, “it is like being raised in a red room, being pulled out of that red room, and asked to describe the colour red”.

The fact that Pharrell seems to believe he was empowering women in his song Blurred Lines and that millions of people misread him is seriously worrying. It is symptomatic of a culture that perversely sells the idea that a women’s empowerment is achieved by gaining the attention of men. There is nothing empowering about half naked or completely naked women being sexually objectified while a very clothed Robin Thicke uses explicitly non-consensual language such as “I know you want it”. Just in case anyone is confused about what sexual objectification is, it is “the viewing of people solely as de-personalised objects of desire instead of individuals with complex desires/plans of their own.”

In his interview with Oprah he talked about how much respect he had for his mum, his wife and the women in his life. Oprah went on to say “Pharrell has recently been using his voice to shine a spotlight on women’s rights.” Pharrell said,

“You realise how sad it is, that there is a perception that is catered to a male dominated world. A man cannot make an egg [I think he meant babies] a man cannot give birth. If women wanted to in this country, if they wanted to, all they would have to do is not go to work and come home… but all I am saying is if women got tired, of the way that we were handling ourselves as a species, all y’all need to do is to hold hands and not make any more babies.”

There you have it everyone! If women want to end war and achieve equality, we just need to hold hands (close our legs) and not have any more babies. BOOM world peace here we come. Why didn’t I think of that?! Obviously women are already “tired”. Which is why women like Eve Ensler created V-Day, a global organisation which aims to end violence against women. And why the Suffragettes went on hunger-strikes and were force fed through tubes and sent to prisons for demanding equal rights and their democratic right to vote – you know, those basic rights white men generally get as a give-in. Women have been tired for a long time, but holding hands and having a fucking sing along is not going to end war or stop gender inequality.

During his interview with Oprah, Pharrell reflected on what he came to realise by co-writing a song like Blurred Lines,

“…what I learned out of that song was, man, I had a much bigger demographic so I instantly knew I wanted to make the album [GIRLS] I always wanted to make, which was devotion to a demographic that had been taking care of me and my family for over twenty years and that was women.”

Pharrell’s new Album GIRLS is a “…a tribute to women” he said and feels it comes from a feminist position, I think Pharrell could learn a thing or two from Beyonce when it comes to making an album from a “feminist position”. I understand Pharrell is trying to remove himself from the negative backlash the song Blurred Lines bought him but he is going about it the wrong way.

GIRLS is clearly about his devotion to women with the album cover depicting him and 3 women in bathrobes… apparently he knows how to devote himself to 3 women at once. But devotion in itself is some interesting language; words like “devotion” point to worshiping women or having them as your muse which creates its own inequality and power imbalance. I think Pharrell would really benefit from reading some literature on feminism before he opens his mouth again and starts talking about how amazing it is women can “make an egg”. Because the only power women have is to either give birth or get naked, apparently?

Just because you say you are a feminist does not make you one.

As my good friend John astutely pointed out while I was discussing this article with him, “declaring oneself to be ‘feminist’ or ‘standing for women’s rights’ is one thing. But a declaration itself is not enough. Anyone who considers themselves in favour of women’s rights has a responsibility to learn theory, and to use it to deconstruct patriarchal structures. Particularly men, who are benefited by a system of privilege that is invisible to them/us.”

John openly admits he used to wave the banners of feminism while objectifying and treating women pretty badly, but he came to the realisation that doing one thing does not absolve you of the other. He went on to say, “For men, this means introspection and self-critique, as well as examining the power-structures that benefit them as a class. The artists behind Blurred Lines can easily say that they are in favour of women’s rights. But their declarations do nothing to erode the patriarchy, while their actions continue to perpetuate rape culture.”

“Growing up we were taught: men had to be tough, we had to be strong, had to be courageous, dominating; no pain; no emotion with the exception of anger. And defiantly no fear. That men are in charge, which means women are not… That men are superior; women are inferior. That men are strong; women are weak. That women are of less value; property of men. I’ve learnt to come to know this to be the socialisation of men, better known as “The Man Box”. 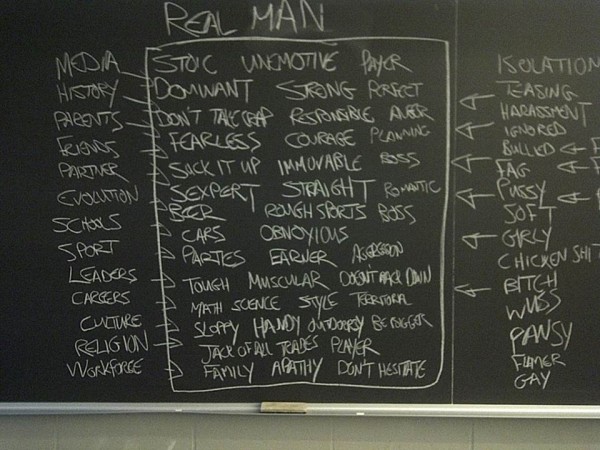 These socially pervasive beliefs and harmful binaries Tony speaks of rob and teach men to orphan some of the most powerful emotions they have; compassion, empathy and vulnerability. These pervasive social beliefs also work to create and maintain rape culture and violence against women, they lead to men like Pharrell and Thicke truly believing that by writing a song like Blurred Lines they are helping to “liberate” women – and worse still it leads to people agreeing with them!?!

We need less men declaring their allegiance to feminism and more men unpacking patriarchy and challenging toxic modes of masculinity. We desperately need to connect the conversations of toxic masculinity and violence and oppression against women.  As Elizabeth Plank points out, “gender ideals [gender policing] aren’t only damaging for women; they’re universally harmful.”

There are many men who are calling bullshit on patriarchy and misogyny, from Carlos Andres Gomez the spoken word poet who wrote the memoir, Man Up: reimagining manhood. In which he acknowledges his own past misogyny and how he has worked to change his behaviour, to Jeff Perera who works for White Ribbon in America who believes “…a missing and vital key toward inspiring healthy manhood and a new generation of men, is to teach them to walk the earth in a state of mindfulness.” And of course Tony and Sunil who I spoke about previously in this blog.

The more men who write and create “maps to manhood” and deconstruct and redefine what it can be, the more chance people like Pharrell and Thicke have of understanding that by writing then performing a song like Blurred Lines they are not helping women, they are furthering the oppression of them. While at the same time―perpetuating damaging ideals and stereotypes of manhood.