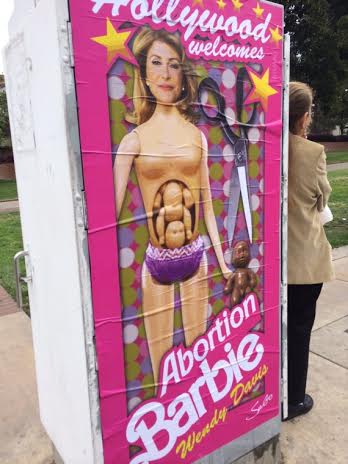 Last Thursday, conservative street artist Sabo plastered parts of Los Angeles with posters he had designed – life-size images of a nearly naked Barbie Doll complete with a plastic foetus inside her abdomen. He replaced Barbie’s head with Wendy Davis’ face; Davis is the Democrat’s gubernatorial candidate in Texas who Conservative pundit Erick Erickson nicknamed “Abortion Barbie” earlier this year because she stood for 11 hours straight to, as the Huffington Post reported, “filibuster the draconian package of anti-abortion bills.” It was an epic action that garnered her both enormous praise and criticism.

But, and it is a big but, since her 11 hour showdown, Davis has revoked much of what she said and calls herself “pro-life”. She has even gone so far as to support a ban on abortions after 20 weeks. Guess you got to win those votes in conservative America somehow? So why would Sabo use her image? Perhaps Pro-lifers like him are so manic in their activism that they even attack their potential allies?

Apart from the obvious fact that Sabo targeted completely the wrong person in his Christian crusade to slag off pro-choice activists (awkward), he might also like to know Barbie could not stand up to a strong wind let alone carry a child to full term. Fucking twat.

Many artists use art as a weapon in the struggle for social justice, although Sabo is one of the first contemporary street artists to wield it in opposition to social progress – street art has its roots in left wing dissidence.

Artists such as Barbra Kruger, who are just as home in gallery spaces as they are in the streets, have used art to comment on social issues such as abortion long before Sabo ever did. In stark contrast to Sabo’s work, Kruger designed the poster used to rally support against a case heard in the American Supreme Court in the 1970s; a case the Bush administration was hoping would overturn the landmark Roe vs Wade ruling which established basic legal abortion rights in the 1960s.

The poster showed a negative and positive image of a woman’s face with the declarative caption: “Your Body is a Battleground”.

The patriarchal right wing has, despite efforts by such women as Barbra Kruger, used women’s bodies as a battleground for ‘moral dominance’ since the Sixties, thereby creating a disturbing landscape for women’s reproductive rights. The landmark Roe vs Wade ruling has suffered constant attacks. Just last year a house panel, mainly comprised of men, voted to advance a bill banning abortion after 20 weeks of pregnancy across the entire United States of America.  As Democracy Now reported,

“…Similar bans are already in place in states across the country, part of an unprecedented tide of state abortion restrictions enacted in the past few years with the goal of challenging Roe v. Wade at the Supreme Court and making abortion inaccessible and unaffordable on the ground.”

A report released by “The National Advocates for Pregnant Women” written by Lynn M. Paltrow and Jeanne Flavin found that between 1973, when Roe v. Wade was decided, and 2005, American women have been forced to carry unwanted babies. As Democracy Now grimly pointed out, “The National Advocates for Pregnant Women found 413 cases when pregnant women were deprived of their physical liberty, and at least 250 more interventions have taken place since then.” In one case, a court ordered a critically ill woman in Washington, D.C. to undergo a C-section against her will. Neither the baby nor the mother survived. Effectively this woman, and many more like her, have been deprived of their right to life. 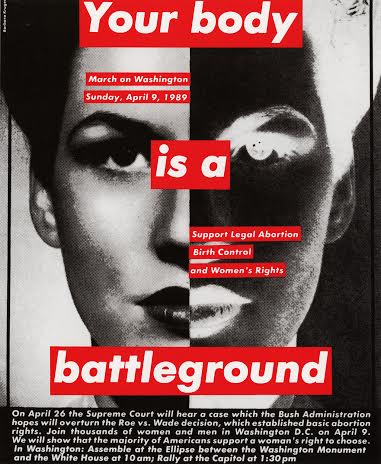 There is something terrifying about the state taking complete control of a woman’s right to determine her own future.

Kruger created a work in 1982 where the words, “we have received orders not to move”, are superimposed over a woman’s immobile body. The image simultaneously references women’s social status and supplies a feminist retort to the patriarchy’s controlling structures concerned with ‘putting women in their place’.

Forcing women to have children they do not want and often cannot afford is an immobilising action. The aforementioned report found that “low-income women and women of colour, especially African American women, are overrepresented among those who have been arrested or subjected to equivalent deprivations of liberty. As Laurie Penny makes clear,

…“single-mother” is still a synonym for “poor and shunned”, and pregnancy discrimination is rampant in this treacherous post-crash job market.

The attack on women’s reproductive rights and the right to choice is not limited to America. Britain’s Abortion Act 1967 demands women justify ‘why continuing with a pregnancy poses a threat to her health and well-being or that of her existing offspring.’ Northern Ireland will not even allow an abortion if the pregnancy is the result of rape, or if the pregnancy poses a threat to the mother’s life. Women residing in Northern Ireland, as Laurie Penny, who writes for The New Statesman, has previously pointed out, will often fly to England to gain access to abortion; but the trip is often funded by themselves – many go into debt to buy the procedure.

In New Zealand it is illegal to have an abortion unless a medical practitioner declares the foetus is a risk to the mother’s health or the mother is “mentally unfit” a.k.a. “insane”. As I learnt when I needed an abortion, because “I just do not want a baby right now” is not a good enough reason.

I am done paying penance with the shame and guilt women are expected to bear and feel for the rest of our lives for having an abortion. A woman’s “function” far exceeds her ability to pump out babies. The expectation is that I will be sorry forever ever and ever for having an abortion. I am not sorry, and nor should any other women have to be. Exercising my basic human rights is nothing to be ashamed of.

Women everywhere have always fought, and continue to fight, against right wing abortion politics, pro-lifers and apparently now “conservative street artists” who spread abortion myths and disinformation. Emily Lett, a 25-year old who works as an abortion councillor, recently filmed her own abortion and posted it on YouTube for the world to see. You can hear Lett humming quietly to herself throughout the procedure and at the end she says “I feel good”; as Laurie Penny asserts, “shattering generations of anxiety and fear-mongering around reproductive choice with three simple words.” Abortion can even be a positive experience for some women – given the right support and informed decision making.

Lett is not the only one to use film and social media to fight the stigma surrounding abortion. A vblogger, who goes by the name of Angie AntiTheist, filmed herself having a medical abortion after taking the pill RU486. As Lett pointed out in relation to Angie’s abortion video “[Angie wanted] to show everyone that she was fine, that it’s not scary, it doesn’t hurt, and that she was confident in her decision to do it.”

Wealthy and conservative Kathryn Stuard of Midland, Texas funded the ‘Abortion Barbie’ posters (perhaps she didn’t realise Davis is more an ally than enemy, either?), saying “It hits people with the truth”. ‘Abortion Barbie’ certainly hits people with something, but it is not the truth. A half-naked Barbie with a foetus in her abdomen and a giant pair of scissors isn’t the truth; it is abortion propaganda. It is women like Lett and Angie who refuse to hide their stories of abortion who are hitting people with the truth. They are dismantling abortion myths and challenging the stigma women who have had abortions face. 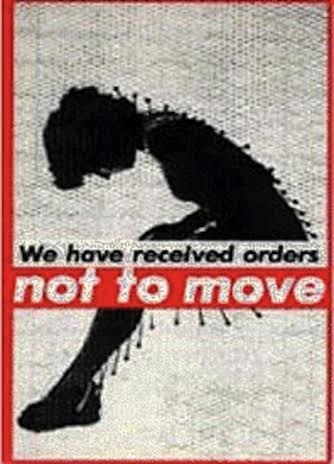