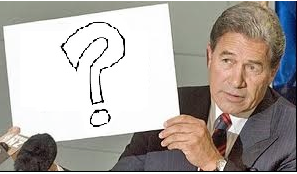 While I still think that NZ First won’t gain over 5% for a variety of reasons, if they do manage to gain over 5% could NZ First work with a progressive Government or would they go back to National?

I am suspicious that Winston wants to go home to the Nats, but recently I’ve come to appreciate Winston’s greater desire is for a legacy.

A ‘NZ Fund’ propped up by compulsory Super to buy back the assets of NZ and protect NZs economic sovereignty is worth more to Winston than the baubles of power, because let’s face it, National and labour will offer the baubles regardless if he has 5%. Winston who will be 72 at the next election wants legacy now because the leather seats and limo taxi rides are already in the bag.

If Winston could work with Labour in the next Government, what is the main stumbling block to that?

NZ First hate the Greens and the Greens hate NZ First with a passion that goes beyond MANA and ACT. Like so many political grudge matches, the reasons for the hate is deeply personal.

For the Greens, having Helen dump on them by using NZ First has created a bitterness and a little brother complex that still resonates today. For Winston, it was the belittling attacks by Russel Norman over the Owen Glenn fiasco that have never healed and is the main reason he hates the Greens.

How does a resentment between two political parties rebuild? In any question involving NZ First, the answer is over scotch.

If there is any hope in including a NZ First that gains over 5% inside a progressive change of Government in September, Russel Norman has to go drink several bottles of scotch with Winston. Their personal relationship needs to develop if NZ First is to be included.

Where can common ground be found?

NZ First’s economic sovereignty can easily glide into a fit within the Green’s sustainable Green economy package. Big State Keynesianism with an environmental ethos could be the building blocks between the two, but these personal meetings and chats need to happen now if they have any hope of seeding anything come election day.

I’d look to book a couple of tables at the Green Parrot for Russel and Winston if I were serious about boosting the chances of a Labour led Government this year.