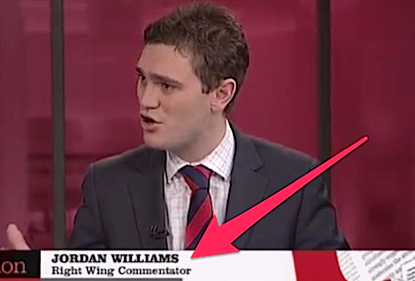 For those who are not aware of Jordan Williams, he is a lawyer working in Wellington.

He is also a right wing commentator/activist; anti-MMP campaigner; and party apparatchik for National and ACT. He was closely involved in the Brash coup against ACT-leader Rodney Hide in 2011.

“Based on his track record (fronting the Peter Shirtcliffe/Simon Lusk anti-MMP campaign and Don Brash’s ACT Party leadership coup) I personally see Jordan as a paid political mouthpiece — nothing more, nothing less. He is, it seems to me, merely another lobbyist who, it appears, works for ‘right wing’ figures or interest groups.”

Recently, Williams set up the so-called “Taxpayers Union”, a group which he  explained on Radio NZ as being based on a UK version. His group’s objectives  include;

“The New Zealand Taxpayers’ Union is a non-partisan activist group, dedicated to being the voice for Kiwi taxpayers in the corridors of power. We’re here to fight government waste and make sure New Zealanders get value for money from their tax dollar.”

The rest of the group’s aims & objectives reads pretty much like the Act Party’s manifesto (see: What we stand for) – a party that Williams is closely associated with. (Perhaps this is the next neo-liberal Party in the wings…?)

Just recently, under the banner of the “Taxpayer’s Union”, Williams launched an attack on Hone Harawira’s trip to South Africa to attend Mandela’s funeral.

“Reacting to confirmation from Hone Harawira’s office that taxpayers will be footing the bill for the Mana Party leader’s trip to the Mandela service*, Executive Director of the Taxpayers’ Union Jordan Williams said:

“This trip is a slap in the face to taxpayers and particularly Mr Harawira’s electorate, who are supposed to be the beneficiaries of his parliamentary funding.

Mr Harawira already spends more than any other non-ministerial member of Parliament. Earlier in the year the public found out he spent even more than the then Leader of the Opposition.”

Interestingly, Williams  made no comment on the fact that Key’s “official” attendance at the funeral included a photographer. Far be it for Dear Leader to attend an event without the obligatory photo-op.

Maybe Mr Williams considers a photographer’s presence more valid than an attendance by someone who was an actual anti-apartheid campaigner – like Hone Harawira?

Williams’ 11 December press release, though, went on to state,

“Originally Mr Harawira told the public that he was footing the bill himself. Now we know that he’s treating the taxpayer funded Parliamentary budget as a travel slush fund.”

This is where Williams’ begins to spin.

A casual check of media reports at the time Harawira announced his plan to attend reveals something closer to the truth;

Mr Harawira said his trip is coming out of his parliamentary leadership fund.

A Mana Party spokeswoman confirmed this morning the trip would be paid for out of Harawira’s leader’s budget.

Mr Harawira hopes to have his trip paid for out of his parliamentary budget but if he can’t, he will fund it himself.

Nowhere does Hone Harawira promise that he will be “footing the bill himself“.

What he does say is that he wants the trip funded from his own Parliamentary Budget,  but if he can’t, he will fund it himself.

Not exactly an auspicious start for a political lobby group (or nascent political party) that it has to resort to fabrication to push it’s agenda.

But if the so-called “Taxpayers Union” is to be ACT v.2, then it is par-for-course.

When criticisms were made public regarding the make-up of John Key’s party to South Africa, there were cries of condemnation that not a single anti-apartheid activist had been invited to attend.

Indeed, right wing commentators were quick to point out,

Mr Mandela could have been the most bitter man in the world when he came out of prison, but he wasn’t, Mr Bolger said.

“The challenge is whether the world will pick up and try to advance the cause which Mandela pursued the whole of his life – greater fairness and equity within society,” Mr Bolger told Breakfast from Pretoria this morning.

And on “Frankly Speaking“, on 7 December, Roger Gascoigne left this comment,

“Whatever strange lens you look at the world through Frank, it’s the ‘office’ of the Prime Minister that will attend. Try a little of Mandela’s concept of forgiving and moving on yourself.
Given 1981 was pretty much a 50/50 split…what would be a grand gesture is if the PM’s office decided to take John Minto to represent the other half of NZ from 81. Then you might think we’ve ALL learned something.”

None of which has stopped Jordan Williams from  blatant fibbing, and five days later,  John Key joined in with this outrageous comment,

“This is a guy that went to South Africa on a jolly and shouldn’t be billing the taxpayer for it. The bottom line is we took a delegation – whether he likes it or not – that represented, in our view, the right mix. I personally don’t believe there was a role for him to go to South Africa.”

(Were the two public comments related? Considering that Williams is closely connected to the National Party, did Key’s media spin-doctors take their cue from Williams’ 11 December media release?)

Then of course, we had Justice Minister Judith Collin with her infamous Twitter comments, where she ‘tweeted’ that Labour Leader David  Cunliffe and Springbok tour protest leader John Minto were “numpties with bells on“.

So much for understanding and tolerance from the Right.

They should just stick to  bullshitting. They’re far better at it ( it’s in their DNA).

So Jordan Williams has been caught out lying to the media and public? Does that mean he should resign from the “Taxpayers Union”, as David Farrar recently called for Len Brown’s ‘lying’?

“I believe Len Brown must resign as Mayor of Auckland […] But the report makes Clear that Len Brown publicly lied to the media and the public.“

Spinning to the media and public?! Terrible that!

Perhaps Len and Jordan can make it a double-act resignation?

The Paepae: Left and Right: useful when doing the hokey cokey, but past its use-by date for politics?

Letter to the Editor: Should Key attend Mandela’s funeral?

The Daily Blog: We did what John Key should have done