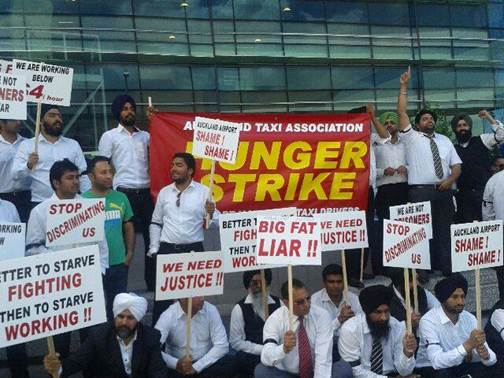 When I first heard of some taxi drivers at Auckland Airport going on hunger strike I instinctively thought “We don’t do that here”. It seemed impossibly radical, surely there were other options that would be more effective in a New Zealand context? I mean, I’m sure it’s bad but can’t be anything we haven’t seen before right? What issue in a country like New Zealand could possibly move them to such extremities?

Troubled by my own ignorance on the matter, I took a drive out to the protest to talk to the drivers outside the Auckland airport management building. I was struck immediately by the tight organisation of the picket line – this was creme de la creme of picket lines. The 70 or so mainly Indian new migrants had professionally printed signage , relentless chanting that fell in repeated rounds with precision, support was strong and morale was high even if people were hungry. The response to my initial ponderings was summarised on one taxi drivers placard “Better to starve fighting, then starve working.”

They were certainly on starvation wages if they had work at all. Days earlier 50 taxi drivers with President Taxis had effectively been fired. President Taxi’s had had its contract severed with the Airport. Even before the contract was severed most of these guys were earning around $4 an hour – well below the minimum wage.

The interesting thing was – it was President Taxi employees who happened to be the core activists of the newly formed Auckland Taxi Association. Earlier this month around 200 airport taxi drivers identified a number of abuses against taxi drivers at the Airport. Being contractors and not direct employees, they couldn’t join a union so instead formed the Auckland Taxi Association to fight for better conditions and rights.

Manmohan Singh, one of the drivers affected and the spokesperson for Auckland Taxi Association (ATA), said he believed that President Taxis losing its contract to Auckland Airport was an attempt by the Airport Company to isolate the leadership of the Association and break its campaign for the rights of taxi drivers at Auckland airport.

200 taxi drivers who were members of the Association met together to discuss a response. Mainstream news told us these taxi drivers were prepared to go on hunger strike, or even set themselves on fire in protest. While the rest of us gasped into our lattes, for the drivers the choice was between starvation wages or solidarity and fight back. There was nothing to lose and a decision was made democratically among the drivers to do whatever it took to get their incomes back.

Despite the high levels of self-organisation I witnessed on the picket line , leaders of the ATA sought support from FIRST Union and union organiser Bill Bradford was assigned to the dispute, helping out with negotiations and hauling the rest of us organisers out to support the drivers where needed.

After marching, picketing and chanting for 6 days and holding their hunger strike for 4 of those days finally Auckland Airport management wanted to meet. And wanted to meet seriously. After 8 hours of negotiation all of the taxi drivers concerns had been addressed.

The taxi drivers dispute was a success story and an example to us all.

Nevertheless, I have to acknowledge my original initial response. “We don’t do that here.”

Businesses continue to exploit new migrant workers in this country , this has led us to associate new migrants with vulnerability. However as our migrant communities grow in confidence, and begin to reject the exploitation many of them suffer from, we have seen and will continue to see them use their collective strength to create difference in their lives.

The same goes for workers in non-traditional and insecure work such as contractors or casual workers.

This will necessarily entail forms of organising and tactics that are unfamiliar. As a movement, we need to support, celebrate and learn from these as we come across them or risk isolating ourselves from the increasing numbers of migrant and precarious workers and their communities.