Tim Selwyn is founder and editor of the popular Tumeke blog. Tim writes informed, esoteric and satirical commentary on politics, society and the media from an independent position as a critic of the government and establishment of New Zealand.

Tim stood trial for sedition over a protest action against the NZ government’s confiscation of the foreshore and seabed from Maori in 2004 (the last person to be convicted of sedition in Aotearoa).

Tim describes himself as a reformed libertarian and a nationalist republican. He supported the Mana movement at the 2011 election. Tim has previously written reviews in print for Rip It Up, Craccum and the Sunday Star Times. 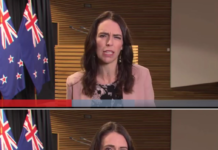 Jacinda’s ‘tells’ over Ihumātao and where was RNZ on Monday night?