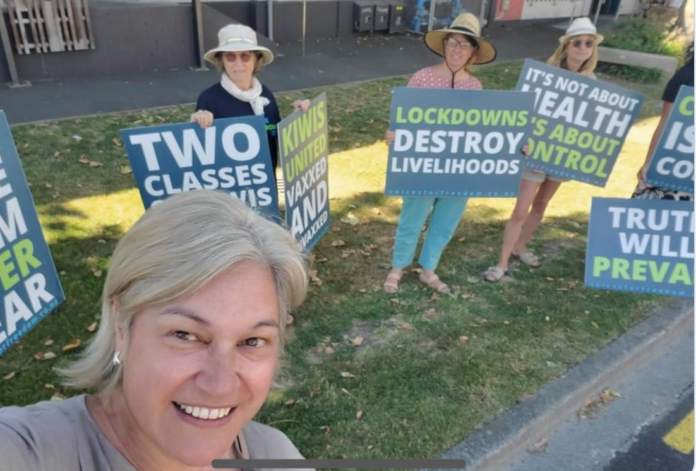 National MP Harete Hipango, out joining a group of anti-vaccine and anti-mandate Voices for Freedom protestors.

Every Kiwi has the right to protest, that’s a fundamental right, but these lunatics are getting dark money from far Right American lunatics and they become legitimised when MPs join their ranks!

We are going through a once in a century pandemic. It’s scary, it’s disruptive and it’s frightening.

The powers implemented to curtail our freedom are extreme and must be challenged every week – BUT the first responsibility of the State is to protect the people and thanks to Jacinda’s incredible leadership, we have some of the lowest death and hospitalisation rates in the Western World.

So while these mandates and restrictions must always be challenged these Voices for Freedom nutters are as rational as Qanon incels who serve only their own agendas and crazy theories!

These are the Crystal Karens, the daughters of the first generation of feminist divorces in the 1970s who distrusted patriarchal science and fled to the new age Gaia womb.

When Liz Gunn cried out that Jacinda was (and I quote) ‘raping Gaia’ it was a clarion call to all Crystal Karen’s to rise up.

Thanks to the hate algorithms of Facebook, Qanon white supremacists managed to infiltrate the wellness pages of the Crystal Karens and spread their toxic yolk.

The collective noun for a group of Karens is a ‘Coven of Karens’, or a ‘Covid of Karens’.

If National was in power right now, we would be fucked!