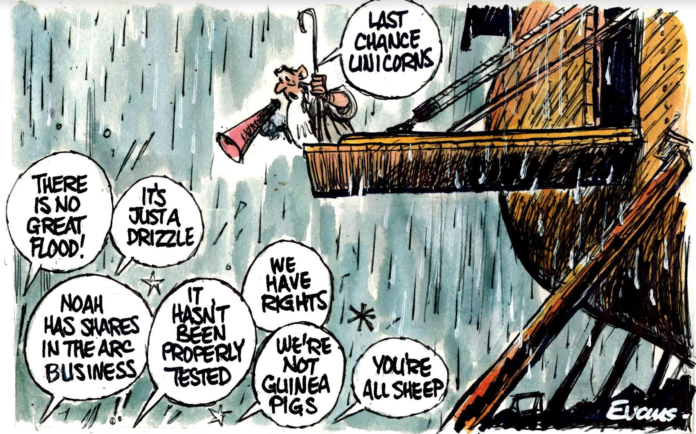 EVERY FAMILY HAS ONE. You must know the sort. One of the Baby Boom generation, who desperately wishes he wasn’t. He looks in the mirror and sees more and more grey hairs. His face, too, is changing. Sagging, folding, failing: his increasingly unfamiliar features all appear to have given up resisting the relentless tug of gravity – and old age. But, even as his body surrenders, this guy’s spirit is goaded into ever greater feats of derring-do. The man may be getting older, but the ideas he espouses grow younger with every passing year.

If you’re especially unlucky you’ll end up being seated next to this guy – let’s call him Cousin Simon – at Christmas Dinner. Some small inkling of what you’re in for comes from the weird language he speaks. He talks about all sorts of important things happening “in this space” and promises to send the “deets” to your “device”. Far from being reproached by your furrowed brow, he delights in your obvious incomprehension. The two of you may be roughly the same age, but he, at least, remains tuned to the frequency of youth.

Watching him watching the rest of the family, you just know he’s waiting for some poor sod to say something requiring his beneficent intervention. You don’t have to be a rocket scientist to work out who it’s likely to be. Your other cousin, Murray, has been a dairy farmer all his life and has a powerful set of politically incorrect views to prove it. To make matters worse, Murray derives obvious pleasure from winding Simon up.

“You’d be disappointed with the COP26 fiasco, Simon. With the atmosphere warming up, all that hot air was probably the last thing the planet needed! But, for my money, the best story to come out of the whole conference was the news item that Royal Air Force cargo planes had to make dozens and dozens of flights between London and Glasgow to ensure that all the big-wigs had suitably flash limousines in which to travel back and forth to the conference venue. That’s quite a carbon footprint!”

Simon’s brow furrows and he lets out a long sigh.

“Those are the sort of stories climate inactivists seize upon to discredit what is actually the incredibly important work of international gatherings like COP26. It is vital, when discussing Climate Change, Murray, to keep your eyes on the Big Picture.”

Murray’s grin should have warned Simon that he was walking into an ambush.

“Ah, yes, the ‘Big Picture’, you’re so right, Simon. Keeping our eyes on the Big Picture is important. The problem, of course, is trying to locate New Zealand in the overall composition. Because, if the Big Picture of Co2 emissions covers 1,000 square centimetres of canvass, New Zealand’s share of the surface amounts to just 17 square centimetres. You’ve got to get up real close to even see our contribution to the problem. So, even if we were to paint over all our GGE sins, it would take a pretty sharp-eyed observer to even notice they’d gone.”

Simon shook his head in that infuriating ‘more in sorrow than in anger’ way he has perfected.

“But, Murray, that’s a bit like saying there was no need for New Zealand to have participated in World War II, because our contribution to the final victory over fascism was almost too small to measure. Regardless of our size, we did the best we could – we played our part. Doing our bit in the fight against Climate Change is equally important. Even the smallest of contributions counts for something.”

Murray put down his knife and fork and snorted derisively.

“No, it doesn’t, Simon. And, your comparison with World War II just doesn’t hold water. How long do you think New Zealand would have persisted – voluntarily – if its participation in the war effort was rapidly destroying its economy, throwing tens-of-thousands of people out of work, and causing its social fabric to disintegrate? This country did bloody well out of the War. The Brits took everything we could load into a freighter’s hold. But, when fighting achieves nothing but the destruction of everything people hold dear, well, then they stop fighting. How long did the Norwegians hold out? The Belgians? The Dutch? The bloody French? The damage we would have to inflict upon ourselves to make the slightest impact on our emissions is just too great. New Zealanders won’t stand for it.”

“So, what are you saying, Murray? That we should just give up?”

“What I’m saying, Simon, is that the idea we can “do something” is just nonsense. Our entire civilisation was built with the energy derived from the burning of fossil fuels. Take away its fossil fuel and our civilisation collapses. It’s just that simple, Simon. We simply have no choice but to go on doing what we’ve always done. You shake your head? Well, think about this. Europe is suffering from an acute fuel shortage – and winter is fast approaching. Without heating oil, without natural gas, and, yes, without that terrible stuff called ‘coal’, Europeans will freeze. Do you really think their governments are going to tell them: ‘Rug-up folks! We’re fighting global warming!’ Not a chance. They’re going to keep the lights on and the central heating working – no matter what.”

Simon, was having none of it.

“That’s just bullshit, Murray! Europe has made huge strides in bringing alternative energy sources into the mix. The technology is there – it’s being used right now!”

“Europe? North America? Australasia? Oh sure. They can play at fighting climate change because all the industrial grunt work is being done in other parts of the planet. Take a look at what powers the machines of China, India, Brazil, Nigeria, South Africa – it ain’t windmills and solar panels, Simon – that’s for sure! Don’t you get it? If these ‘workshops of the world’ stop using fossil fuels, then nothing gets made. You think we’ve got ‘supply-chain’ problems now, with Covid? Just wait until another thousand Chinese factories shut down for want of the electricity generated by coal-fired power plants! And then you tell me, Simon, when those factories are no long creating profits, how are the Chinese supposed to pay for New Zealand’s Milk Powder?”

Oh boy! This was about to get just a little too hot for Christmas Day. Thank God Murray’s wife was thinking the same thing.

“Come on everybody, that’s enough politics. Your Christmas Dinner’s getting cold. Murray, why don’t you go and get Simon another glass of chilled Chardonnay. He looks like he could use one!”