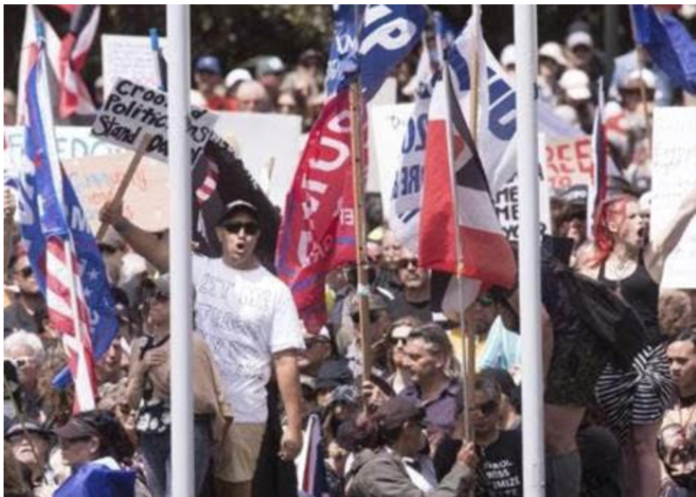 MANY NEW ZEALANDERS recoiled with shock and disbelief at Tuesday’s (9/11/21) Anti-Government protest outside Parliament. That all manner of crazy stuff could be found on social media was well understood, but to see that online extremism suddenly brought to life on the streets of the capital city was deeply disturbing. That such a frightening combination of ignorance and anger was festering away inside the body politic came as a profound shock to “mainstream” New Zealand.

Who were these people? How could they hold such absurd beliefs? What has gone so wrong with New Zealand’s education system that so many of those emerging from it can no longer distinguish between reality and utterly delusional fantasy? So complete seemed the destruction of the protesters’ critical faculties that it was difficult to look upon the spectacle without experiencing pangs of guilt. These were, after all, fellow Kiwis. How was it possible that they had been allowed to sink so low?

One imagines that many educated English people experienced very similar feelings when they realised that a majority of their fellow citizens had voted to leave the European Union. Or when educated Americans realised with a rising sense of horror that their next President would be Donald Trump. Social layers that had been dismissed, by one of their own, as “a basket of deplorables” could no longer be ignored. The question remained, however: Where had this vast army of the political living dead come from?

The brutally straightforward answer is that they are the people for whom no room could be found on the board game called Neoliberal Capitalism. The people who, 35 years ago, suddenly discovered that the promise of a steady job with good wages and a home of their own to live in, had suddenly and irrevocably been withdrawn. Without the credentials now deemed essential to a minimally respectable existence, the only title they could aspire to was “loser”.

As hundreds-of-thousands of New Zealanders soon discovered, to become a loser was to become invisible. Economically, socially, culturally, politically: their contribution went unnoticed. Nobody cared what they did; what they thought; or how they felt.

That they would always be there, grinding away, was simply assumed. At the check-out counter; behind the wheel of a truck; driving a forklift in a cavernous warehouse; cleaning the toilets and emptying the rubbish bins in a high-rise office block: the people who did these jobs were just the flesh-and-blood cogs whose teeth turned the implacable capitalist machinery. Those who dwelt in the world of the winners may have thanked them politely as they wheeled their shopping trolley away from the check-out counter, but the faces of the losing-class were forgotten long before the winners reached the car-park.

A cruel enough existence, the winners might concede, were anyone bold enough to ask them, but most of them lacked the imagination to understand just how cruel. In the ad-breaks that punctuate the endless reality shows on free-to-air television (themselves carefully crafted exercises in accentuating the personal failings of all but one of the contestants) the world of the winners, in all its plenitude, is constantly on display. The couples who effortlessly purchase a house with the help of a friendly Aussie bank. The magnificent motor vehicles. The holidays in far-off and exotic locations. A world whose inhabitants wouldn’t be caught dead eating KFC, or shopping at Pak N Save – like the losers.

But, if the world of the winners is not for them, then, by the same token, their own world is not for the winners. To be uneducated is not the same as being dumb. The losing-class has its own rules, its own moral code. Heroism is measured by the extent to which the odds that are so outrageously stacked against the losing-class are successfully defied; by how decisively their players emerge victorious from a game so obviously rigged. Freedom means smashing through every obstacle erected to slow the losing-class down. Because no loser ever got very far by following the rules written by the winners.

What, then, did the losers see when Covid-19 arrived upon the scene?

They saw the winners sent home with their laptops and smart-phones. They saw themselves heading out to work every morning, as usual, to do what were once called the “shit jobs” – but were now referred to as “essential occupations”. They wondered about that. If their jobs were “essential”, why weren’t they paid the same sort of wages as the people on “Zoom” meetings, whose jobs clearly were not? They saw a world that kept on working pretty well, even when more than half the workforce was doing nothing more productive than exchanging e-mails. Some members of the Team of Five Million seemed to have a whole lot less to do than others. Something was definitely wrong with this picture.

For the losers without jobs, however, the picture was more confused and worrying. They had learned to live in ways that kept them at a safe distance from the winners and their flinty-faced enforcers. That might mean living in the wop-wops: miles away from the nearest WINZ office; taking under-the-table payments from friends and neighbours; doing stuff that the local cop knew better than to ask about; surviving off-the-grid.

It was harder to remain anonymous and invisible in the big cities. Harder – but not impossible. The trick was to have as little to do with the winners and their rules as possible. The last thing these members of the losing-class needed was the authorities taking an interest in them, personally. As in demanding they come in and get vaccinated against Covid-19 – now.

If one goes looking for reasons not to do something, one will almost certainly find them – especially on the Internet. There were plenty of people, all over the world, who were adamant that the winners were talking nonsense. Really, Covid was no worse than the flu. For some reason, however, the winning class was dead set on smashing its way into the world it had condemned the losers to live in. They were coming for them, hypodermic syringes at the ready. “It’s for your own good!”, they cried. Like the losing-class had never heard that before! “If you don’t get jabbed, we’ll take your job!” Ah, yes, that was a more familiar tune. Where had they heard it before? Of course, that’s right, in the mouths of Nazis and Commies. Well, fuck that!

It is easy to theorise that the reaction of the losing-class here in New Zealand might have been different if this country had experienced the mass deaths common to the rest of the world. But, one only has to think of the United States and the United Kingdom, and the vehemence of their Covid-19 deniers and anti-vaxxers, to realise that not even the grim reality of hundreds-of-thousands of Covid victims is enough to change losing-class minds.

Neoliberal Capitalism destroyed the illusion of a united society and drove millions of human-beings off the Monopoly Board it had made out of Western societies. In “normal” times these two worlds: the one made up of those equipped to play; and the one reserved for those with no hope of participating – let alone winning; had few, if any, points of contact. But Covid has forced these two worlds together and, like matter coming into contact with anti-matter, the reaction is fraught with danger.

Who are these people? These lines from a poem, written by an anonymous unemployed worker in 1932, capture something of the losing-class’s mood:

We shall come, the unemployed,

The disinherited of this earth,

We shall come into your temples

And your marble halls of mirth.

We shall come as you have made us,

You, the House of Have, shall listen

Unto us, the House of Want.

We are measuring the weed-chip gangs

That stretch from coast to coast,

We shall come, us, the rightless,

Us, the God forsaken host.

We shall come in all the madness

Born of hunger, pain and strife,

On our lips the cry for vengeance,

In our souls the lust for life.

We shall swarm, as swarmed the locusts

That on Pharaoh’s kingdom fell,

And sling your politicians

And your damned police to Hell.