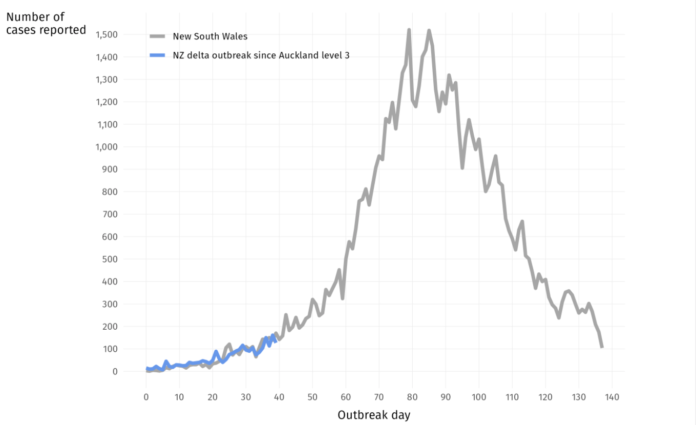 According to Wikipedia data science is an inter-disciplinary field that uses scientific methods, processes, algorithms and systems to extract knowledge and insights from noisy, structured and unstructured data, and apply knowledge and actionable insights from data across a broad range of application domains.

This is what Auckland based Aaron Schiff does as a freelance data scientist. But he is more than this; he is also an economist. One thing data scientists and economists share is a love of graphs.

Schiff is obviously no exception to this rule as evidenced by a fascinating tweet that he posted on 2 November: https://twitter.com/aschiff/status/1455295162737774594.

He was using graphs to make contrasting comparisons with the Delta variant of Covid-19 in Australia’s most populous state New South Wales and New Zealand.

SchiffHis first graph compared both the state and country with the start of the Delta outbreak. There is no doubt New Zealand’s pandemic response looks impressive as the graph illustrates.

It should be noted that the starting point (Delta arrival) for New South Wales was May whereas in New Zealand it was August.

Now look at the second graph which compares New South Wales with New Zealand when the latter government lowered the Auckland alert level to 3 on 22 September.

If New Zealand were to continue to follow the disastrous New South Wales experience as outlined in the graph then the otherwise avoidable intense pressure on our already heavily under-staffed public hospitals and the avoidable deaths would be devastating. Our health system would be in real trouble.

But there are at least two mitigating factors. First, New Zealand’s vaccination rate in September was much higher than the rate in New South Wales in May. The later arrival of delta to New Zealand was a definite advantage for us.

New South Wales has just achieved 90% full vaccination of those eligible. But an important qualification is that at the same point there were 220 new infections and four deaths in the state.

The second mitigating factor is that, although daily infections are escalating upwards and hospitalisations increasing in Auckland, the elimination strategy still applying in the rest of the country has been effective in containing the Delta variant.

It should not therefore be assumed that the graph will continue to show New Zealand matching New South Wales. This was something that Prime Minister Jacinda Ardern committed to preventing in August and for much of September.

But, at the same time, it can’t be ruled out. The Government’s pandemic response was outstanding from March 2020. But this is no longer the case. Since its poor overconfident judgement to lower Auckland’s alert level (disregarding the advice of its modellers) the Government’s response has been stumbling.

Should the pattern indicated in the scary graph continue then government stumbling will be a significant contributor.