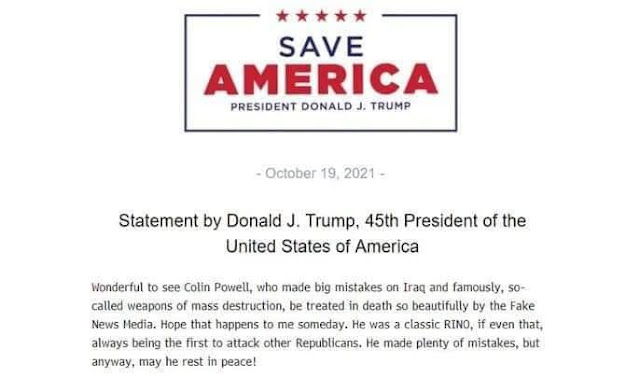 Look, I don’t like Trump. There are quite a long list of reasons why. But this kind of thing is a large part of why he won significant support in various places. Because he isn’t fettered by a Consensus like everybody he was up against. And sure, that manifests often as crass if not outright offensive stuff. And “offensive” here also means up to and including the laws of physics and reality itself, upon occasion.

Yet you see this sort of thing happen fairly frequently in American politics and the trickle-down therefrom which we get out here in the rest of the Anglosphere and thence World at large.

Somebody who … did some fairly dramatically wrong things (and it’s not just about Iraq – take a look at Powell’s “investigation” of Mai Lai, for instance) – and in death, all of that is insta-washed away. A beatification occurs.

It’s a process we all see happen – and, rightly or wrongly, any criticism of as it’s happening usually gets shut down by the perhaps understandable dictum that we do not speak ill of the dead.

Some take that further, of course, and you get Ireland issuing an official telegram of condolence when a certain German leader died, but that is another matter for another time.

Now I’m not saying that it’s right to suddenly start cheering and celebrating when a man in his eighties dies of Covid-19 related complications and a compromised immune system. It isn’t. Any harm he could have inflicted was, by this point, seriously limited – it’d already occurred a long time aforehand.

And the legacy of that kind of conduct he’d lent his legitimacy to – well, that lives on long after its mortal standard-bearer no longer does. If and when that dies, there’ll certainly be cause for quite some jubilation.

Yet I do suggest that given epitaphs and eulogies appear to ‘set the consensus’ for how history is going to treat somebody for the near- or even medium-term future … well, some ‘critical appraisal’ of that element, and the ‘hagiographizing’ which post-mortem seemingly inevitably takes place these days … is not necessarily incorrect to explore.

Which doesn’t mean I agree with Trump – generally or otherwise.

But I do think that here, even jeeringly phrased, the guy’s got a point. 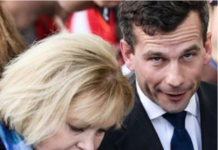 “Freedom Day’ for who? The true cost of National opening the economy on December 1st 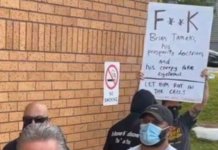