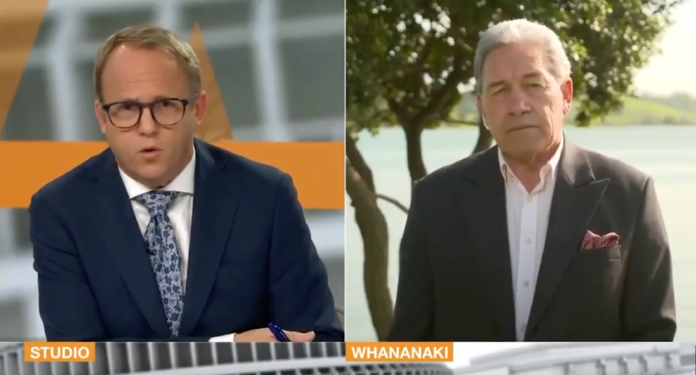 Mongrel Mob hit back at Winston Peters over Northland claims

A Mongrel Mob leader accused of helping a Covid-positive sex worker obtain documentation to travel to Northland has lashed out at the allegations and threatened legal action.

“If Winston said it, he needs to prove it… If he’s not going to apologise, we will need to look at legal action,” Tam said.

Peters appeared on TV3’s Newshub on Saturday morning levelling the allegations which had been circulating on social media and encrypted messaging app ‘WhatsApp’ on Friday night.

“This person came here with a gang member assigned essential worker status, falsified the reason she was coming,” Peters said.

“[She] engaged with people at a hotel in Whangārei… and went to a marae up North which hid her from the public and, dare I say it, the police. The police got a warrant to arrest her.”

Peters claimed the Government found out about the situation “days and days ago”.

“How he got up North, that is very difficult to understand in terms of the permit system, but he brought in, under false premises, this woman with him. The rest, sadly, is catastrophic,” Peters said.

Tam told Te Ao Māori News that Peters was off the mark, while he had travelled to Tāmaki under a government exemption to support efforts to get gang members vaccinated, he travelled alone and had never been to Northland since arriving in Auckland.

It was all go there for 30seconds wasn’t it folks?

Right wing trolls on social media started bombarding anyone connected to the media on Friday that Gang Leader Harry Tam had toured the North Island with a Covid infected sex worker.

I was being privately messaged this crap and we even had some trying to post this garbage on the site.

Then yesterday Winston comes out and makes the allegation on The Nation.

The right wing talking points are that this is Labour pandering to gangs. That Labour are soft on crime while harsh on the rest of us. Jacinda was probably getting a cut from a local meth house.

So what actually happened?

The whole thing is bullshit! Harry Tam never went to any of these places! He’s been invited to Auckland in an attempt to get the entire regions gangs pushing and promoting vaccinations!

We have seen elsewhere that Covid can spread through the criminal underworld, if we are able to vaccinate this transmission point then the sprint to 90% vaccinations we are currently on is possible.

Instead of a smart public health campaign, what is Winston and the media doing?

Spreading lies and misinformation to anger and frighten people.

The Government have seen the CCTV footage of this woman on her tiki tour and Harry is not in anyone of them! How can Harry Tam and this woman have toured around the North Island and Harry isn’t in any single CCTV photo???

This is Winston at his divisive worst and our media at its most fake news.

For the love of Christ you fucks! This is a national health emergency and we are teetering on the precipice of a full blown pandemic erupting through our community over summer! Delta is too transmittable to keep out and it will become endemic, thanks to Labour’s leadership we have the space and time to sprint to 90% vaccination.

What the Government are trying to do by working with the gangs who are spreading Covid is vaccinate so this source of transmission stops!

This is the Government doing the best they can to prevent a public health emergency and all Winston, the right and the media can do is lie, spread misinformation and attempt to turn you all against one another!

Some of our own citizens are more malicious than the bloody virus!

Grow the fuck up! No one likes organised crime, but this is a public health emergency you clowns, you need these people to cooperate if we are going to be safe!!!

Are you seriously telling me your hate of gangs is bigger than public welfare during a pandemic?