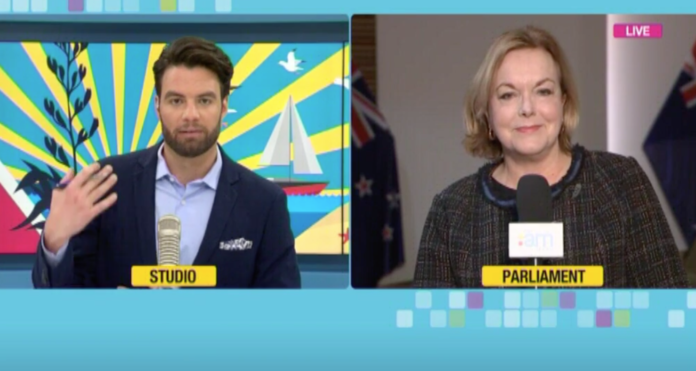 Judith Collins says the National Party plan to let Kiwis into the country for Christmas has been “expert-reviewed”, but it apparently doesn’t put a number on how many could die as a result.

But like driving, Collins says it will include some risk.

“When we drive cars, we understand that there are going to be some people who are injured and occasionally people will lose their lives,” she told The AM Show on Wednesday. “It doesn’t stop us driving cars.”

The Government’s experts last week revealed modelling which suggested thousands of Kiwis could die in an outbreak if vaccination rates don’t get above 90 percent of those currently eligible (12-plus).

National’s plan will be publicly revealed at 10am, Collins promising it will make Kiwis stuck overseas “extremely happy”.

This morning on The AM Show, Ryan gave Judith a very fair run by not focusing on the appalling polls and instead giving her a clear path to discuss her border strategy she is releasing at 10am.

Bewilderingly Judith had nothing to give Ryan other than that it’s been peer reviewed (having Cameron Slater and or Hamish Price look over it is not a peer review btw) but she won’t tell us who the peer review is by and simply admitted that her policy of opening up the border will kill people.

When you have fronted up to media and admit your policy will kill people, it’s kinda over rover isn’t it?

She hijacked Key’s smug hermit kingdom line but neither of them understand the true power of that phrase.

Yes, the vast majority of Kiwi’s are feeling smug in our ‘hermit kingdom’.

No hyper tourism, low unemployment rate, no exploitation of migrant workers or International students and the lowest death rates and hospitalizations in the Western world.

Locals have little sympathy for those who are traveling during a pandemic, we have collectively sacrificed our liberty to keep Covid out and if we want to stay out of lockdowns it demands a more stringent MIQ process.

Many news rooms are staffed by millennials who see global travel as a birthright and they will continue to promote sob story after sob story of those stuck at the border but those of us who didn’t choose to travel will be incandescent with rage if the virus gets back in again because Bruschetta and Apple want to go backpacking in Thailand this Summer.

Judith admitting her policy will kill underestimates the vast silent majority who want a hard close on the border.

That Judith doesn’t comprehend this is just another nail in her ever expanding coffin.