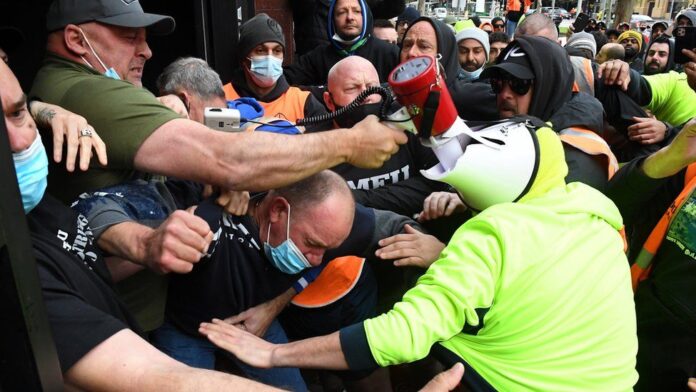 On the news that a violent gang of anti-vaxxer thugs attacked the CFMEU trade union office in Australia.

‘It was orchestrated by rightwing extremists and that is something that we’ve seen – the targeting of other blue-collar unions over the last few months,’ ACTU president Michele O’Neil says

Behind the attack on the CFMEU office

it “didn’t get violent until a few hours in and it continued to escalate when anti-lockdown ‘celebs’ showed up”.

After trying, but failing, to talk to the protesters about their concerns, the CFMEU officers were forced to take cover as the mob threw crates and other objects.

Vaccination against Covid-19 is a health and safety in the workplace issue. To protect our fellow workmates, and vulnerable members of society, as union members and especially leaders we need to be pro-active.
We can’t leave it up to the bosses and government.
Trade Unionists need to take a lead around the vaccine roll-out.
We can’t leave it up to the bosses to mandate what we do.
That will just disempower and divide us.
We need to take our destiny back into our own hands.
As unionists we believe in democracy. To put an end to division, to sort this issue out, we need to put it to the members for a vote.
The same way we decide to go on strike. The majority decide by voting. If one individual decides that he isn’t bound by the majority decision and decides to work during a strike.
They are a scab.
We will not be dictated to by a violent minority of thugs.
Every union in New Zealand needs to put this issue to their members for a binding vote.
The Motion:

This union [insert union name] by a majority democratic vote of the members, decide that for the health and safety in the workplace of all working people that we all agree to abide by this collective decision, (barring legitimate health reasons),  that we will all be vaccinated as a condition of our union membership and support.

To beat covid-19 the medical experts tell us we need to reach a vaccination rate of over 90% of the population
If we want to protect each other, If we want to stamp this contagion out. We have to be united, as a nation and as trade unionists.

Unions have always been at the forefront in the support of progressive social movements, this is one of those times.