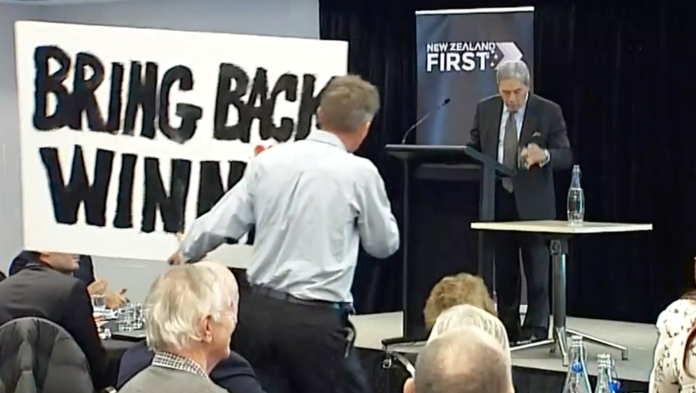 So with his usual gusto, Winston is back and leaping head first into the crowded Cancel Culture backlash market.

When a journalist with the sharp senses of Andrea Vance has the capacity to hear beyond her social media echo chamber and acknowledge the deep resentment many NZers feel towards woke middle class identity politics as she does in yesterday’s column, you know cancel culture is more than just a white fragility talking point…

Language is being policed, and offenders shamed and ostracised for their disfavoured transgressions.

To them, it is bewildering. My correspondents feel vilified by an onslaught of blame for massive societal grievances: climate change, housing affordability, a low-wage economy.

And they are confused, and hurt when they are labelled racist because their understanding of racism (as discrimination or hatred) differs to a more updated definition of systemic oppression.

…where Vance’s analysis falls down is in her assertion that the woke purge will be progress.

Salem witch trial evidential thresholds, whiteness as a social disease, the inability to enter into any disagreement with the woke mob and the ubiquitousness of social media means that the cancel culture backlash has far more power to ignite than Vance suggests.

Chimamanda Ngozi Adichie has written a detailed essay about the conduct of young people on social media “who are choking on sanctimony and lacking in compassion”, who she says are part of a generation “so terrified of having the wrong opinions that they have robbed themselves of the opportunity to think and to learn and to grow”.

Titled It Is Obscene, the essay was published by the Nigerian novelist and feminist on her website on Tuesday night. It attracted so much attention that her website temporarily crashed.

The essay goes into her interactions with two unnamed writers who attended Adichie’s Lagos writing workshop. Both later criticised her on social media for her comments about transgender people and feminism in a 2017 Channel 4 interview, saying “a trans woman is a trans woman”.

At the time, Adichie rejected the claim that she did not believe trans women were women, saying: “Of course they are women but in talking about feminism and gender and all of that, it’s important for us to acknowledge the differences in experience of gender.”

Adichie was subsequently named in the author biography of the first novel by one of the writers. Quoting from emails sent at the time, Adichie’s essay recounts how she asked for her name to be removed from the book, detailing further attacks on social media and how “this person began a narrative that I had sabotaged their career”.

Last year, the non-binary transgender author Akwaeke Emezi tweeted thattwo days after their novel, Freshwater, was published, “[Adichie] asked that her name be removed from my bio everywhere because of my tweets online. Most were about her transphobia.”

Adichie writes in her essay that she was “very supportive of this writer”, because she believed that “we need a diverse range of African stories”.

“Asking that my name be removed from your biography is not sabotaging your career. It is about protecting my boundaries of what I consider acceptable in civil human behaviour,” writes the author of Half of a Yellow Sun.

“It is a simple story – you got close to a famous person, you publicly insulted the famous person to aggrandize yourself, the famous person cut you off, you sent emails and texts that were ignored, and you then decided to go on social media to peddle falsehoods,” writes Adichie.

Adichie finishes her essay with a criticism of “certain young people today like these two from my writing workshop”, describing as “obscene” their “passionate performance of virtue that is well executed in the public space of Twitter but not in the intimate space of friendship”.

“We have a generation of young people on social media so terrified of having the wrong opinions that they have robbed themselves of the opportunity to think and to learn and to grow,” Adichie wrote. “I have spoken to young people who tell me they are terrified to tweet anything, that they read and reread their tweets because they fear they will be attacked by their own. The assumption of good faith is dead. What matters is not goodness but the appearance of goodness. We are no longer human beings. We are now angels jostling to out-angel one another. God help us. It is obscene.”

Vance is right in that the economic malaise that birthed Trump isn’t as apparent, but those NZers who are locked out of home ownership and those 24 000 waiting on social housing will view policy virtue signals like a billion dollar bike bridge with as much resentment as Trump managed to conjure up.

The question is, who amongst NZ First, ACT and National can connect with this boiling culture war resentment.

My guess is that the woke backlash will be generated by the activists themselves meaning all the Right has to do is wait and allow proxification via social media to do the rest.

The woke online need to stop handing the Right culture war ammunition. Unfortunately they are incapable of that.

The solidarity from the unique universal experience Covid has produced alongside Jacinda’s leadership and use of kindness as a political strength are still holding us together, but the greatest danger identity politics presents us with is when white men start seeing themselves solely as an identity.

That’s when shit starts getting nasty. If there are not shared values and only a political culture based on identity, the progress of democracy quickly flips to the tyranny of the majority.