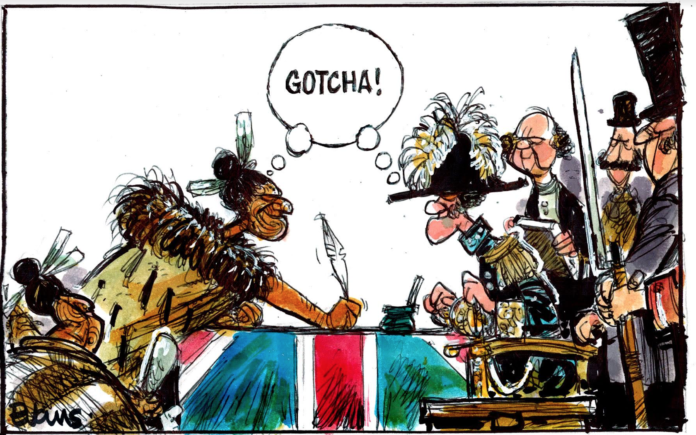 The recent attempt by Judith to race bait He Puapua by using segregation and separatism has been a failure.

The truth is NZs next generation is less frightened about co-governance than the older generation and those dog whistles don’t work. They know their history better and know the historic injustices.

NZers on the whole will wearily wave co-governance through because decades of poor social stats have worn smooth any pretense that universal social services have worked for Māori. The majority attitude is ‘well you do it then’ rather than a gleeful skipping hand in hand towards a Treaty of Waitangi future designed in woke Twitter world.

So I’ve seen little to fear in He Puapua. The claims of a secret segregation agenda was more eye rolling than legitimate, however Comrade Trotter has drawn a direct link between the aspirations of the Neoliberal Corporate Iwi and He Puapua which requires more examination…

Over the course of the past 30 years, the colonial New Zealand state has sought to head-off any resistance engendered by the brutal imposition of neoliberalism on Maori communities, by working closely with traditional Maori power structures to set up what the academic writer Elizabeth Rata calls “Neo-Tribal Capitalism”; alongside the creation of the educated Maori middle-class required to run it. There is scant evidence, to date, that Neo-Tribal Capitalism is any more inclined to encourage democratic participation than the common-or-garden Pakeha variety. It is, almost certainly, no accident that the radical recommendations contained in He Puapua owe a great deal to the ideas contained in Matike Mai Aotearoa – the report on “constitutional transformation” commissioned by the neo-tribal capitalist “Iwi leaders Group”.

84% of Māori live in Urban centers yet it is the Iwi Leaders brand of capitalism calling the shots inside He Puapua, not the Māori Urban Authorities  and we are seeing this influence happening right now…

Urban Māori are absent from the steering group put together by Sir Mason Durie to identify candidates for the interim board of the Māori Health Authority.

…if He Puapua is a genuine attempt at co-governance for the benefit of all Māori, great! But if it’s a trojan horse for Corporate Iwi to promote Māori Capitalism as venal as Pakeha Capitalism, what are we gaining?