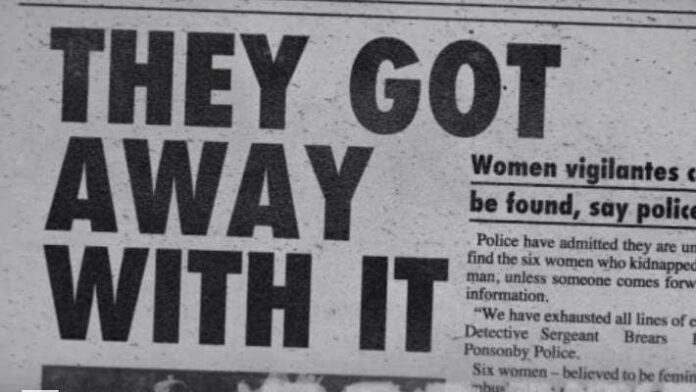 The documentary on the attack on Mervyn Thompson by six women stirred up a lot of memories in my heart.  Although I was at Massey University and not Auckland, and a socialist feminist not a radical, these were my times.

We marched to reclaim the night.  We started and ran Women’s Refuges at a time when men hitting women was ‘just a domestic’.  As I have written about before, we protested outside the courthouse when Judge Watts told a women she deserved to be hit for living with a man.

We debated over issues like ‘all men are potential rapists’ and sexuality, as well as women’s roles in the world.  We stood against a flood of people bussed into a public meeting where the Palmerston North Hospital Board was considering offering an abortion service (it never did), and against the same people protesting against Homosexual Law Reform. It was a decade of passion and change, set against a backdrop of the first neo-liberal Labour Government, itself in strife and turmoil.

When I see documentaries about the 1980s, they always stir up a mix of familiarity and yet unreality.  Were we really there, thinking those things?  And then, gosh, not much has changed in terms of the prosecution of rape charges, has it? Although in some important other areas, things have changed a lot.  It was fascinating to see some of those women all grown up and living interesting lives.

The big change over time has been the increased number of women in areas of life where there were previously only men. And, more slowly, a change in the racial politics of the nation. Places like Parliament have changed as much as anywhere. 1984, the year of Thompson’s attack, was also the year that ten Labour women were elected to Parliament. Famously unable to cope with that (and also with the shock of losing an election after nine years), the National men ogled these strange creatures and marked them on a scale from 1 to 10 as they came up to be sworn in. Subtlety, not.

Anyway, I loved that documentary and the way the women all denied involvement in poor Mervyn’s fate.  They were happy to cede likely responsibility to the one amongst them who had died. The whiff of secrets maintained through the decades came through strongly, and I expect the doco will win awards for its producer. I loved that her mother was involved with Mervyn’s drama class and the play that perhaps planted the idea of the attack.

The 80s, such a decade of struggle and change. Starting with the Springbok tour in 1981, so many of us were changed forever by what happened then. We did not know, at that time, that things would yes, get better, but in so many ways for our nation get worse too. I suppose looking back there is always a feeling that previous times were more innocent, more naïve. It felt like that, this story.

I wonder whether our social movements have lost a little fire in their belly? We are all so civilised now.  Waitangi Day is positively friendly, as the protests that arose in the 80s have dissipated. We are the ’team of five million’ come together to solve all our problems by working hard and not letting each other down. Apart from the horror of the Christchurch Mosque attack, and the everyday racism that still permeates our society, Covid deniers and conspiracy theorists have taken over the mantle of protest.

So, to mark International Women’s Day, I will end with one of my favourite songs from the past, with the chorus:

Don’t be fearful of offending in case you get the sack,

Just recognise your value and we won’t look back.