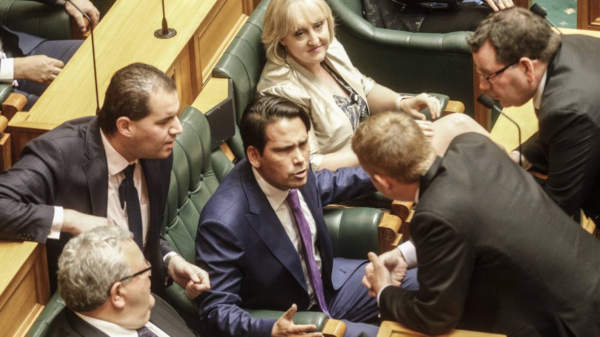 In another life, I think Simon Bridges would have been an actor.

He has a natural talent to perform and we saw that on the first day of the first term of Jacinda’s Government when Simon pretended to count Labour, Green & NZ First MPs in the House and claimed they didn’t have the numbers  to elect Trevor Mallard as the Speaker.

By lying through his teeth, Simon managed to gain vast concessions out of Hipkins on the very floor of Parliament that handed National huge numbers on select committees they weren’t going to get.

He also showed his flair for performance when he held the entire country’s attention hostage by drip feeding the Treasury website hack over a week and humiliated Grant Robertson in the process.

Underestimate Bridges at your own risk. His decision to ruthlessly give Big Oil extra protections against protesters when National were last in Government marks Bridges out as a driven and clever politician happy to use the power of the State as he sees fit.

He also sums up the aspiration that the National Party pretends to represent and he has more chance of regaining middle Nu Zilind vote than Judith or Luxon ever could.

Bridges accused Coster of putting “being nice” ahead of applying the law.

“What you see is, right from the top, an agency or police force that’s much less about arrest, much less about catching gangs and criminals despite huge problems in our society at the moment.

“And much more about being hip and doing things to impress a bunch of other wokesters.”

…but what nice woke middle class journalists living in nice and hip parts of town don’t appreciate is the shadow of fear the 501s have provoked in the working class suburbs working NZ live in.

What sounds comical to the middle class journalists sounds righteous to middle Nu Zilind. The impact of cheap pure meth and the vicious stand over tactics the 501s are prepared to use is causing real anxiety for those living in neighbourhoods where the 501s have moved to.

That NZ want these 501s hurt and arrested, they won’t comprehend the nice facing Police policy that seems to want to cuddle the criminals rather than arrest them.

What’s striking about Bridges attack is that he’s setting it up for the Select Committee meeting and that it’s apparently blindsided Judith.

If I were a betting man this is the start of Bridges leadership bid by running a populist tough on crime agenda while mocking the cultural mantras of the woke.

The biggest mistake the Left and the Government could do right now is write off the concerns of those NZers being forced to live with the blight of the 501s. Those who have daughters sold into prostitution to work off meth debts, those who have had users suffer strokes or brain bleeds or those who are forced to commit violent Dairy robberies to pay for the debts.

The tsunami of meth is devouring communities and while it has seen  persistent focus over the last 6 months by Police targeting the 501s, the damage in the communities left behind is still convulsing.

Simon takes the stage Thursday at the Justice Select Committee. Expect the performance of his career.