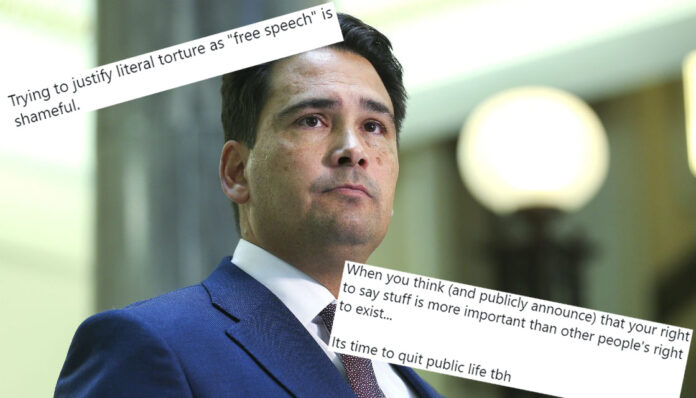 Golriz Ghahraman and the youth branch of the National Party have called out comments Simon Bridges made where he said banning conversion therapy was an attack on free speech.

I hate to be ‘that guy’ but isn’t cancelling Simon Bridges over his Gay Conversion comments proving him right about Cancel Culture?

For the billionth time.

You can’t pray the gay ghosts away and anyone suggesting otherwise is a demented  clown.

A couple are refusing to reveal the sex of their 17-month-old baby to their close family because they want to protect them from ‘unconscious gender bias’.

Mother Hobbit Humphrey, 38, and father Jake England-Johns, 35, who live on a houseboat in Keynsham, near Bath, said they are currently dressing 17-month-old Anoush in both boys and girls clothes.

The married couple, both members of the Extinction Rebellion climate action group, are also asking friends and family to address the toddler using the gender-neutral pronouns, ‘they’ and ‘them’.

I love that the Mums name is ‘Hobbit’.

Look, I’m old fashioned. I think parents have an obligation to love our children unconditionally and provide space for children to be children and that if those children decide in their own experiences that they are gay, Bi, Trans, queer, heterosexual, assexual or polyamorous they should be respected for their choice and be allowed to establish their sexual orientation and identity, but parents pushing ideological straightjackets onto their children, be it for religious or woke identity politics reasons, should be challenged.

Ultimately what we should be aiming for here is our kids to know they are loved no matter who they love or how they love. I’m not sure criminalising people who haven’t reached that place and look to God to fit into a heteronormative sense of ‘normal’ is the best way to achieve that.

Let’s at least agree on this, if you want to arrest anyone, let it be the person selling this bullshit Gay Conversion service, please don’t in a moment of woke overkill criminalise the confused people seeking it.