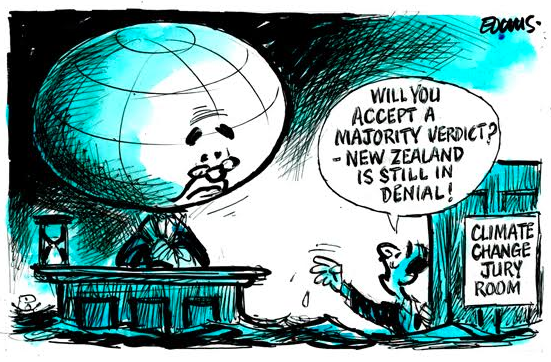 The Climate Change Commission is an attempt by the Government to depoliticise global warming, but is that the problem?

The reality is that the science is in and the science gives a 95% certainty that human pollution has generated a vast jump in the types of gasses that rapidly increase the temperature of the planet.

This debate stopped being about science some time ago.

Those with a commercial vested interest in generating climate change skepticism are big oil and they use the exact same tactics as the tobacco industry embarked upon to create misinformation about smoking and cancer.

A report put out by Greenpeace shows how Koch Industries spent tens of millions on inaccurate and misleading information regarding climate change.

…let’s add this to what we already know about big oil sponsored climate denial. This is the infamous 2002 Frank Luntz Memorandum to the Bush White House, on how to shut down the global warming debate?

So those with vested commercial interests to deny climate change fund the quack science and rely on ideological storm troopers like National Party & ACT voters to fight out of pure cultural spite. None of them can admit they have been wrong all this time and they will die in a ditch to minimize the impacts of Climate Change at all costs.

This is a cultural bitterness for them, further proof that the white bloke is being beaten down by a rainbow coalition of hippies. For them their denial is just a sad societal face saving exercise that no one is listening to any longer.

As progressives wrestle with the enormity of the consequences of adaptation to the new climate realties, we should always spare the time for a few contemptuous jabs at those who strive to hold the debate back.

Climate deniers are creationists in an evolution conference and attempting to depoliticise this fight produces weak kneed nothings like the Climate Commission suggested this week.

At some point we need to stop begging the NZ Right to accept climate change and just fucking tell them this is the way it is now, and if you don’t like, go get fucked.

We will no longer tolerate climate deniers as the planet burns before our eyes.

Climate deniers are to science what Qanon is to rational debate. The sooner the Climate Change Commission acknowledges that, the sooner we can force the radical adaption we will require to survive this.