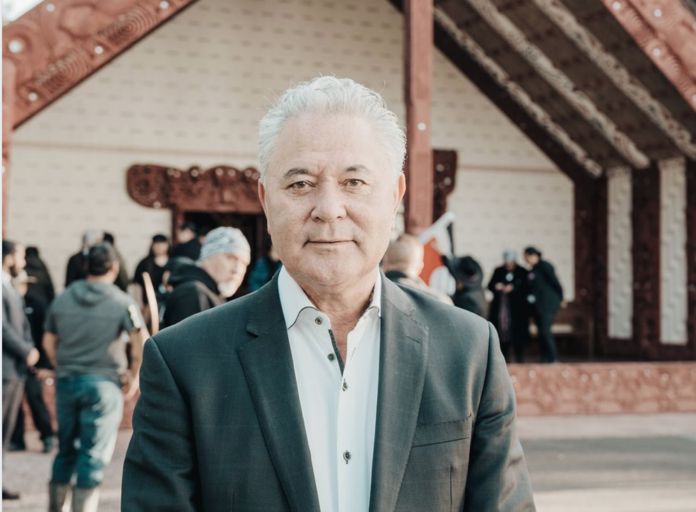 Big ups to Rawiri and Deb for the way in which they conducted themselves in their maiden speeches in Parliament, and for carrying the liberated and unapologetic Maori voice to Wellington.

The movement that has been created is outstanding and will continue to unite our people.
Also congratulations to Rawiri and the way in which he negotiated a peaceful end to the Waikeria situation, so everyone, inmates and prison officers were safe. He did that because we are all whānau and when whānau call, we must respond.

I went with Rawiri to Waikeria. No one in the Māori Party makes judgements on those who have done the crime and are now doing the time.

But just because they have lost their freedom, doesn’t mean they should be treated like dogs and animals.

The unit where those 16 whānau were housed was built in 1911. It was decommissioned a few years ago because it was not fit for purpose.

But the state reopened the buildings knowing that because of rising inmate numbers – even double-bunking inmates in single-man cells.

It’s easy to demonise inmates, but they are somebody’s son, father, uncle, cousin. The facility they were forced into is unfit for human habitation.

Add to that the cancellation of phone privileges home at Christmas and you have a group of already agitated people on the edge.

You take that phone whānau privilege away, on top of inhumane and uninhabitable living conditions, then you are just baiting inmates, and will get that very response.

We want fair treatment for our whānau and that’s why the Māori Party is working on their defence.

These men can be good people and be good citizens. We can never give up on whānau.

I also have nephews who have been in the criminal justice system. I am a Māori from working-class and we had the difficulties, just as many other Maori families with the unjust justice system.

Crime is not something to be proud of, but equally, lots of Māori crimes are crimes of poverty. Our people do not just wake up and think today I’m going to rob or defraud or forge someone or something.

This is why we as a Te Paati Maori and Maori in general must fix these issues.

As we head towards 2021, we have learned how to look after and defend ourselves in a pandemic. We did that without the government rolling out plans specifically for Maori. We stood up for ourselves and did it ourselves.

What that demonstrates is the capacity and capability we Māori have as a people. We don’t need multiple non-Māori controlling our money and expenditure by employing themselves and feasting of it.

What we need is good white folk to step aside and get out of our way. We must get our own resources to fix our own problems. Simple as that. We don’t want handouts – we want our just rights and entitlements. White man’s tools do not fix brown man’s problems.

In 2021, you will see more and more racism called out.

So over the 2021-2023 time frame, we have to consistently call them out. We cannot take a backward step to these people because if we do that, we condone their racism.

If you look the other way, they will continue to run over the top of you – so wakey wakey!

This is the year where our people wake up. We want all the best for you this year but we want you to stand up for yourself.

We are going to call out those that are naughty but rejoice in what we do as Māori.

We must not pull one another down because that is a product of racism. When we create conflicts amongst ourselves, that’s the politics of racism.

To my colleagues who stood shoulder to shoulder during the 2020 election – Mariameno Kapa-Kingi, Donna Pokere-Phillips, Heather Te Au-Skipworth, and Takuta Ferris – well done.

There’s a brighter future and a better way for us.