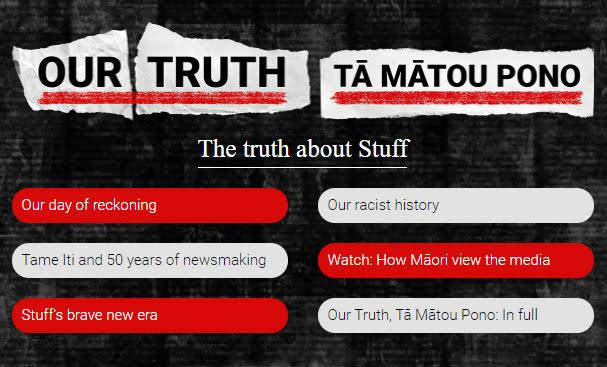 THE DECISION BY STUFF to publish an all-purpose mea culpa for its racism towards Maori will be regretted. That regret will be fuelled in part by future generations’ acute embarrassment at the simplistic anachronisms which constitute the apologists’ central “argument”. Mostly, however, it will be fuelled by the effects of the highly racialised backlash it is bound to provoke. It is clear that a certain privileged layer of New Zealand society has learned nothing from the recent political convulsions besetting both the United Kingdom and the United States. Spit upon the most cherished beliefs and achievements of your “deplorables” and – eventually – they will spit back.

Let us deal with the anachronisms first. The word itself simply means: “a chronological inconsistency in some arrangement, especially a juxtaposition of persons, events, objects, language terms and customs from different time periods.” To judge the actions of historical actors by the prevailing moral precepts of the present is not only philosophically impermissible, but it also betrays the writer’s fundamental ignorance of the history he is purporting to condemn.

The founders of The Press, The Dominion, The Evening Post, The Taranaki Herald and The Waikato Times; the editors they appointed; and the journalists they hired; were all children of their times. They were living in a colony of the British Empire and in their writing they evinced the beliefs and values of what historians have dubbed “The Age of Imperialism”.

The conquest of other peoples’ lands, and the ruthless dismantling of cultures that inevitably followed, was justified by the imperialists’ unshakeable conviction that the steady advance of Western Civilisation across the planet lay at the very heart of human “progress”. The corollary to this belief in Western superiority was the notion that any resistance on the part of those the imperialist poet par excellence, Rudyard Kipling, called “lesser breeds without the law” was an unacceptable impediment to progress that must, at all costs, be crushed.

Which is not to say that these imperialist beliefs were accepted uncritically by everyone. There were contemporaries of the men who founded New Zealand’s colonial press who, while undoubtedly accepting the racial hierarchies proclaimed by the science of the day, nevertheless recognised the theft of other people’s property when they saw it – and weren’t afraid to say so.

If the white races were so self-evidently superior to the rest of humanity, these critics argued, then surely they were honour-bound to uphold the core civilisational values of which they were so inordinately proud? Promises, freely given, must be kept. Rights universally shared must be universally acknowledged. Equality, once proclaimed, cannot be rescinded. It was people of this temperament – a tiny minority of the settler population – who felt moved to write to those same colonial newspapers condemning with considerable force the destruction of Parihaka and the detention without trial of the settlement’s leaders.

It is also a fact that the colonial newspapers printed their letters. Proof, one might think, that the Pakeha New Zealanders of 140 years ago were not all the slavering racist monsters portrayed by Stuff’s current crop of anachronistic moralisers.

Which is not to say that right up until the childhoods of people still alive today, those racial hierarchies were upheld as scientific truths. Not even the unqualified evil of the Holocaust and the eugenicist murder of innocents by Nazi doctors in the 1930s and 40s, was enough to shake the white supremacist prejudices of the British, French, Dutch and Portuguese imperialists who attempted to pick up where they left off before the outbreak of the Second World War in 1939.

It took the breaking of the imperialists’ grip in India, Africa, Indo-China and Indonesia – by Indians, Africans, Indo-Chinese and Indonesians – bolstered by the scholarship of post-Holocaust anthropologists, historians and political philosophers, to upend finally the racial hierarchies that had justified white supremacy for upwards of four centuries. That, and the fight for civil rights in the belly of the American beast that quickened radically the debate over the place of race in the development of the United States – and the whole of the “Western World”.

It was not an easy fight. Ideas that have, generation after generation, been ingrained in the minds of children by their parents, taught in school textbooks, and articulated forcefully by teachers, preachers, politicians and journalists of every stripe, are extremely hard to kill. All the more so when the identity of those to whom they have been transmitted is bound up inextricably with the pride and self-confidence they communicate, and the power they purport to guarantee. The simple idea that “The West is the Best” is not contradicted – or apologised for – without unleashing resentments and hatreds of punishing force.

Reading the various essays published in the Stuff newspapers, it becomes clear very quickly that the writers possess not the slightest insight or empathy for the settler society they condemn; nor understanding of the 150 years of “racist” journalism they apologise for. What, one is moved to wonder, do they see when they look upon the works of their ancestors? The roads and the railways? The public buildings? The farms and factories? The family histories of struggle, disappointment and ultimate success? The sacrifice of tens-of-thousands of young men in wars whose casualty-lists reduce the New Zealand Wars to a skirmish.

A few years ago, I recall describing to an academic friend from Turkey the “battle” of Rangiaowhia, and explaining the discrepancy between the accounts of Pakeha and Maori historians as to the number killed. Was it twelve or seventeen? “Thousand?”, my companion asked, confused. “No, no,” I replied, embarrassed, “just twelve or seventeen.” She shook her head in quiet disbelief.

To apologise for one’s history is to invite those wronged by it to seek either restitution or retribution – or, maybe, both. The problem is, that what was taken by a combination of force and trickery is unlikely to be reclaimed by anything else. The children of the settlers who built “New Zealand” on the body of “Aotearoa”, understand in that special place known to all human-beings who love their homeland, that the apologies being offered by these radical journalists (who clearly despise everything “New Zealand” stands for) are a warning of deep and tragic upheavals to come.

Some of these Pakeha will reluctantly abandon their country. Some will retreat deeper into what is still its racist heartland. And some will struggle to preserve the nation they have grown up in. A nation whose true history is one of Maori and Pakeha finding more and more to be proud of in the way each ethnicity has adapted to the presence of the other. In the course of that history many apologies have been earned, and some have been given, but not, in the end, for being caught up in historical forces too vast for blame, and too permanent for guilt.