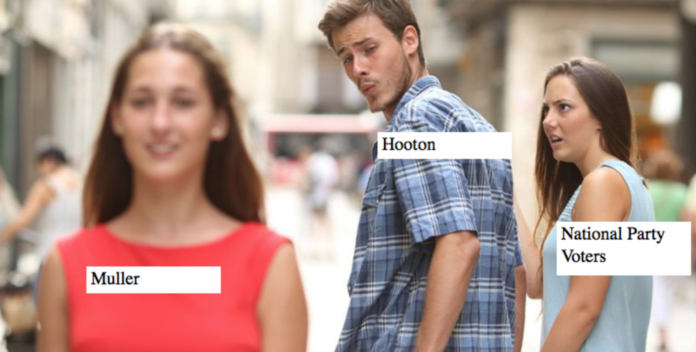 Honestly, who cares how Judith reshuffles the infected bio-mass that is what remains of the National Party?

She has punished anyone with any talent and placed around her loyalists who will protect her back during the next assassination season.

Reti has been advanced because he was the only one who looked barely competent inside National during the election, no one knows Andrew Bayly, Michael Woodhouse should have been punished for his Covid lies and no one likes Louise Upston.

That’s less a front bench and more a back seat in a locked car that’s on fire.

Judith’s casual malice can’t find and won’t find any fertile voting ground in the middle, but her recent congratulations of Biden that were attacked online by angry National voters is a reminder that the rump of the National vote are simply too vicious and nasty to accept anyone less malicious.

This is the ultimate problem for National and the NZ Right.

Judith is too malicious for middle New Zealand, but not malicious enough for the more feral voting base of the National Party.

What I think is likely to happen over the next 3 years is that National won’t be able to find a leader who can win back National 45+ women from Jacinda and the lack of culture war spite will see more male voters drift from National towards ACT.

ACT will polarise and cannibalise National vote because it will be seen as the Right Wing Values Party while National’s empty ideology won’t sate that polarisation.

The fear of a National + Far Right ACT Party Government will keep all those new voters supporting Jacinda in 2023, but 2026 could be an enormous ideological clash.