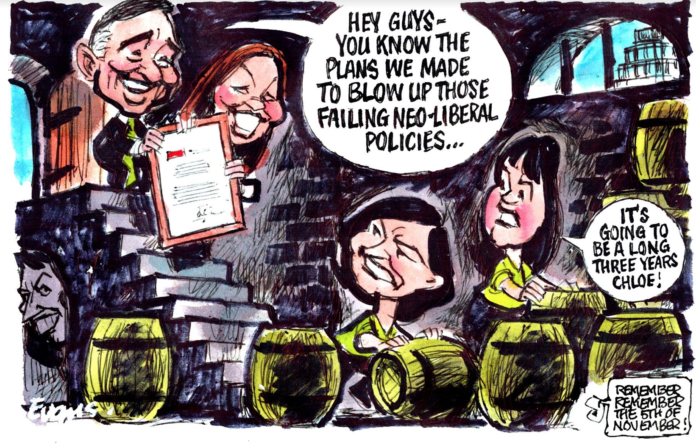 Mile’s Law says where you stand, depends on where you sit. And Buddhist teachings tell us that unhappiness comes from the difference between the way the world is, and how you want it to be. So the outcome of the election, the referenda (pending special votes) and the Green Party co-operation agreement with the Labour Party, will either sit well, seen as successful, mature and balanced, moderately conservative incrementalism; or sit like a disappointment at lost opportunities, depending on where you stand. Roughly half the population will be pessimistic, defeatist, and maybe half optimistic and happy about the nation’s path after the weekend in politics.

Despite the new co-operation agreement between Labour and the Greens, those who wanted to see Labour decisively govern alone, shouldn’t be too upset. There is not so much concession to the Green Party that any radicalism is likely to enter mainstream Cabinet decisions. The new Ministerial positions give the Greens magnanimous recognition of electoral status but put them in their subservient place.

At the same time, there are sufficient concessions to core Green Party middle class concerns that the agreement with Labour is acceptable to supporters. They can have their cake with Ministerial roles, and by being able to disagree and retain a distinct voice and position to critique the Government they’re part of -without much power to do anything about areas of concern outside their ambit-, they can eat their cake too. In reality, the Green Party didn’t have much choice. Their current relationship with Jacinda Ardern is conciliatory and civil. There’s a preference on both sides for co-operation, and consensus. Refusing to negotiate and agree would have seemed unprofessional, immature and churlish. The outcome that sees the Green Party co-leaders with Ministerial roles outside Cabinet delivers a win-win. But it also co-opts and subsumes the Party to a moderate Labour agenda, so it’s a disappointing trade-off of independence for token baubles of office, depending on where you sit.

The new Green roles, and other Cabinet arrangements show that this government aims to ameliorate and mitigate the negative effects of capitalism, rather than to address their fundamental causes. The ‘wins’ that are new Green Ministerial positions outside Cabinet have sidelined climate change and biodiversity management while creating impressions of genuine conciliation and power sharing. Rather than being integrated to the decisions regarding activities that fundamentally drive greenhouse gas emissions up, and biodiversity down –agriculture and transport, the Green Party will help shore up the nation’s business settings without threatening them.

Similarly, the position of Minister (outside Cabinet) for family and sexual violence, and Associate Minister for Housing, given to Marama Davidson, are just an ambulance at the bottom of the cliff. Where violence and homelessness are the creation of poverty, hardship and colonisation, unless the settings that cause that deprivation change, the violence and homelessness are unlikely to. Cultural settings that celebrate violence – on tv and other media, and in international affairs, make judicial punishments ineffective. High imprisonment rates are a form of institutionalised violence that create and support networks of violence, intergenerational violence and incarceration. Without capital gains or wealth taxes or other disincentives to house price escalation, an Associate Minister role for housing / homelessness amounts to little.

Similarly, Phil Twyford’s demotion to Minister for Disarmament outside Cabinet, is a token position for a token role when the world still has enough nuclear weapons for mutually assured destruction. That position would have been more meaningful if it was coupled with the Foreign Affairs role, after all, we still need to sustain a ‘nuclear-free moment’, but that would have been way too Corbanesque. We saw with Corban over the weekend what happens to leaders who stray too far from the ‘radical centre’.

The agreement between Labour and the Green Party should also be viewed in terms of who holds the structural power within the new Government. Animal-based industries have been positioned as economic heroes generating much needed foreign exchange earnings after Covid-19. Extinctions of species like Maui and Hector’s dolphins, and albatrosses, and international consumer perceptions of low animal welfare standards are threats to trade. So appointing steady pragmatist David Parker to Oceans and Fishing, and farmer-friendly Damien O’Connor, to Agriculture and Trade, make it clear that economic risks from ocean depletion and poor animal welfare, and post-Brexit / EU trade negotiations will be managed in the best interests of the industry and trade rather than because of the intrinsic value of the environment and animals themselves.

Conservationists might be pleased there’s now a Ministerial position that covers oceans concerns. But the whole oceans responsibility is on equal footing with fishing under the new Minister for both, – so we can expect little of the urgent reform of the latter to support the former, but rather ocean ‘stewardship’ to support the interests of fishing, under David Parker. Equally, the significant and frustrated animal justice movement will be pleased that the role of Associate Minister for Agriculture with responsibility for Animal Welfare, previously occupied by Meka Whaitiri, but vacant for the past two years, is revived. However, the potential of the role is diminished somewhat when compared to the maintenance of a Minister dedicated to Racing.

The Government has declared its priorities – dealing with the Covid-19 health and economic recovery. The emphasis on root and branch reform of the country’s planning strictures, getting rid of the Resource Management Act, and fast-tracking shovel-based infrastructure, means it’s more about building back, and less about the better. Even the tentative Lake Onslow dry weather hydro storage scheme is from the build side of the solution rather than the demand-management side of the energy equation and while argued as renewable, fails to address the climate change and biodiversity crises.

The outcome of the cannabis referendum is frustrating, heartening and ridiculous at the same time for supporters. To get so close to passing the 50% threshold trigger required for Parliament to consider the Cannabis Legalisation and Control Bill was the successful result of decades of advocacy and campaigning. But to be just short of that threshold is disappointing – and makes New Zealand less progressive than many other nations, and even states of America. And it will do nothing to reduce the prevalence or any problems with weed in our society. Some perceive a failure of leadership especially from Jacinda Ardern – who maintained an inconsistent and illogical position in declaring her vote before the election on euthanasia, but not on cannabis. Others commend her for voting in support even though she didn’t have the public ‘courage of her convictions’. Some critics blame the cannabis lobby for what is a failure of society and state. That more New Zealanders voted to be able to kill themselves than to be able to consume cannabis in moderate strength in the privacy of their own homes is confused and inexplicable. But obviously more than half the people of the country will be happy with that result.

Jacinda Ardern and Grant Robertson are lining themselves up as the Clark and Cullen of the current Parliamentary generation. Smart, technocratic, competent, convincing and reassuring, they’ll not rock the boat, but will keep it afloat on stormy global waters. Under Ardern and Robertson’s leadership, the horizon for transformation is a long way distant. They have set their speed and direction of travel to the glacial- incremental reformist model of their most recent Labour forebears and mentors, and according to the modest, conservative, aspirations and ambitions of the country. In a world of uncertainty, in New Zealand, investors, house owners, consumers and voters for Labour will all mostly be happy. For most people, that’s a successful democracy. But above all, it’s a capitalist democracy after all.