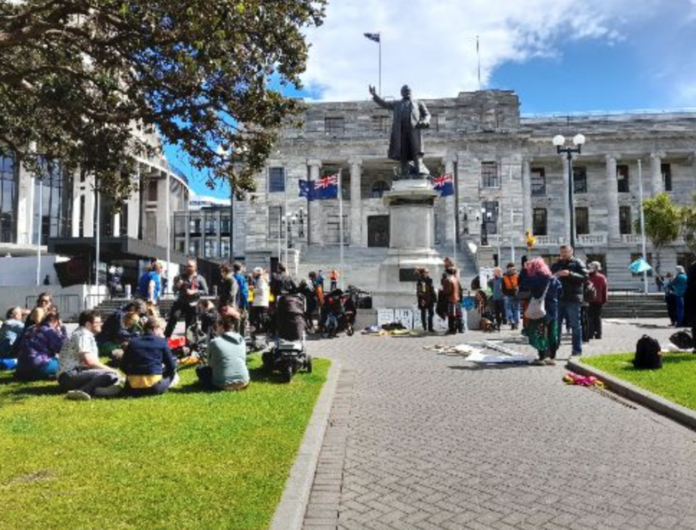 Tuesday 13th October is the 100th day of the protest vigil by E Tū for Future at the foot of the Richard Seddon monument in front of New Zealand Parliament buildings. The vigil also included 6 hunger strikers doing a total of 69 days hunger striking, to raise awareness of the growing climate and eco-crisis, and call for immediate urgent action.

By reaching the 100 day milestone, E Tū for Future equals the record set by Ollie Langridge in 2019, for the longest running protest outside Parliament in New Zealand’s history. E Tū for Future intends to continue their daily protest until the election, for a total of 103 days. Their continuous vigil ends on Friday 17th October, after then the protest will be continued weekly by the Wellington Fridays for Futuregroup. Langridge’s 100 day record was achieved individually, whereas the E Tū for Future vigil has been a joint effort by a small group of individuals rostered in relay.

The vigil hours this week are 9am to 3pm with supporters expected to gather at lunchtime on the 100th day from noon to 1.30pm. All are welcome to visit the vigil and meet the hunger strikers.

E Tū for Future spokesperson, David Goldsmith says: “We don’t know what effect our action is having, our actions are stitches in a much larger blanket of change that for decades many, many people have and continue to labour for. From a sense of desperation, we have gone on hunger strike and spent hours on Parliament’s lawn, seeking to communicate and inform. Sometimes that has felt very worthwhile, including good conversations especially with younger people. Sometimes, we have simply explained politics and MMP to first time voters. However, we are also learning on Parliament’s lawn that real change will come from truly meeting and hearing each other, as much as from educating and informing each other. The change that the Earth is demanding of us is huge. Our small steps need to become a landslide: all of us in this together”.

“We recognise Te Tiriti is Aotearoa/New Zealand’s founding document, an agreement between Tangata Whenua and our colonising ancestors. We regret that Te Tiriti was not honoured by our colonising ancestors and we regret that this continues to be displayed in front of New Zealand Parliament buildings. The Richard Seddon monument we have sat at the foot of, the architecture and the other iconography in front of Parliament, it all communicates dominance and colonisation: it does not communicate any sense of a true, respectful meeting of two cultures. Unless we can truly hear each other and transform our power structures, we will not meet this enormous challenge of climate and ecological collapse either.”

More information can be found at etu4future.nz – including blogs by several vigil participants.

We recognize that Te Ātiawa/Taranaki ki Te Upoko o Te Ika has mana whenua over the location in which this action takes place, and participants hope to honour them with a sincere commitment to keeping the world safe and healthy for generations to come.