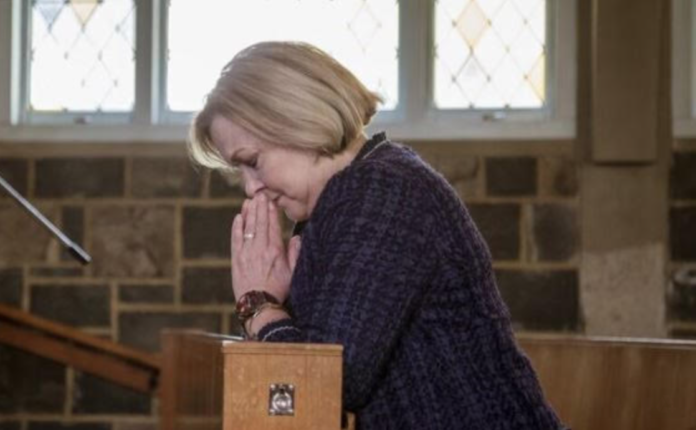 WHAT IS WRONG with the picture of Judith Collins at prayer? In her maiden speech to Parliament, Collins testified to her belief in God. Presumably, then, her Christian faith is a longstanding facet of her political persona. Why should anyone take exception to the images of her kneeling in prayer.

There are many reasons for New Zealanders to furrow their brows at these images.

First and foremost, as any reasonably well-educated Christian knows, such public displays of piety are frowned upon by Jesus himself. It took an old-fashioned Sunday school graduate like Winston Peters only a few moments to locate the relevant verses from the sixth chapter of Matthew’s gospel:

“And when you pray, do not be like the hypocrites, for they love to pray standing in the synagogues and on the street corners to be seen by others. Truly I tell you, they have received their reward in full. But when you pray, go into your room, close the door and pray to your Father, who is unseen.”

It is curious that Judith Collins appears to be unfamiliar with these verses since they precede what is, arguably, the most quoted passage from the New Testament – The Lord’s Prayer. Certainly, a Christian more familiar with Jesus’s teachings would have hesitated to pray in circumstances where her actions would, inevitably, be captured by the news media and broadcast across the entire country. Does praying alone in an empty chapel while the cameras rolled constitute going into your room and closing the door? Or, is it more akin to praying on the street corners to be seen by others?

Even those New Zealanders whose feet have never crossed the threshold of a church or a Sunday school would likely have reacted uneasily to Collin’s display. In part this is a reflection of New Zealand society’s rapidly increasing secularisation. In the 2018 Census, only 37 percent of the population were prepared to declare themselves Christian. Forty years ago, by way of contrast, the fraction of New Zealanders declaring themselves Christian was well in excess of two-thirds. The unavoidable conclusion? That the overt expression of religious belief is fast becoming unusual in New Zealand. Judith Collins praying in the pose of an altar-panel saint looked odd because it was odd.

For political secularists, Collins behaviour is especially objectionable. It has long been a central tenet of New Zealand’s democratic political system that Church and State remain strictly separated. As far back as Nineteenth Century, this principle was reflected in New Zealand legislation. The Education Act of 1877 clearly stipulated that the provision of public education in New Zealand was to be “free, compulsory and secular”.

The only period in New Zealand political history when a citizen’s membership of a specific Christian denomination became an excuse for something pretty closely resembling persecution was during, and immediately after, the First World War. New Zealand’s wartime government was dominated by the right-wing Reform Party leader and Prime Minister, Bill Massey. A member of the rabidly Protestant Orange Order, Massey regarded New Zealand Catholics as both a religious and political threat.

Massey’s bigotry found strong institutional support in the Protestant Political Association. Formed in 1919, the PPA worked hand-in-glove with the Reform Party to maintain the ascendancy of Protestantism in New Zealand. They were especially concerned to block the rise of the NZ Labour Party. Formed in 1916, Labour was strongly supported by New Zealand’s large Irish-Catholic community.

The most notorious instance of religious bigotry in this fractious period of New Zealand history came in 1922 when the Catholic Assistant-Bishop of Auckland, James Liston, was put on trial for sedition for recalling in a speech he delivered on St Patrick’s Day the Irish patriots who fell in the 1916 Easter Rising. The all Protestant jury acquitted him, but could not refrain from noting that Liston had committed “a grave indiscretion”.

On the Left, the vexed question of how to integrate Catholic schools into New Zealand’s secular public education system remained a cause of considerable contention right up until the early 1970s. It was in hopes of bringing this contentious issue to a favourable conclusion that the quasi-official Catholic newspaper “The Tablet” came out openly for the Labour Party in the general election of 1972. The reconciliation effected between Catholics and socialist secularists by the creation of “Integrated Schools” was, however, short-lived. The rise of feminism and the ongoing campaign for a woman’s right to choose to have an abortion pretty much sundered orthodox Catholicism from the secular labour movement.

The success of the so-called “new social movements” – most especially in relation to their expansion of women’s and LGBTQ+ rights – threw the principle of Church/State separation into particularly sharp relief. Increasingly, Christianity retreated into the theology of evangelical fundamentalism, or, in the case of the Catholic Church, rigid doctrinal orthodoxy. Liberal Christianity was in full retreat as the principal protestant denominations turned their faces from the agitation for the creation of gay and lesbian ministers and the right of LGBTQ+ Christians to marry.

Thanks to groups like the Maxim Institute, this seeding of the socially-conservative Right with Christian candidates has been proceeding steadily for some time. Maxim’s chosen vessel, the NZ National Party, has, for more than fifteen years, been choosing evangelical fundamentalist Christians to represent the party in safe seats. This has progressed to the point where Christian support, if not already crucial to the success of an aspiring leader, is fast becoming so. The recent departure of so many of National’s liberal MPs, and the projected loss of still more in the general election already underway, seems certain to strengthen the influence of National’s Christian Right.

Adding to the internal pressures applied by National’s own Christian MPs, is the rise of the even more conservative New Conservative Party. With the latter rumoured to be stripping thousands of Christian votes away from National, is it any wonder Judith Collins fell to her knees in the chapel and began an earnest conversation with God! 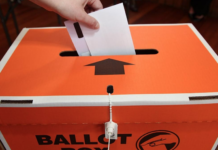 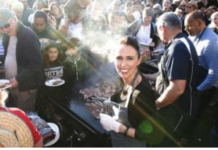 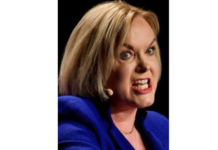