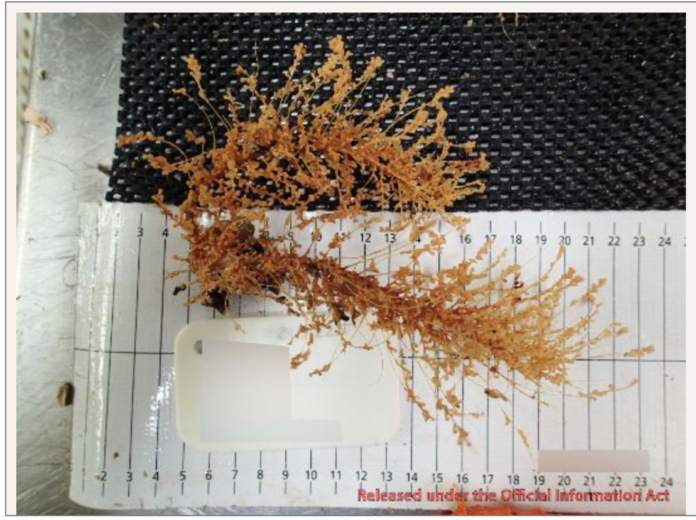 Forest & Bird has released photos obtained through the Official Information Act of 29 species of coral fished up from the ocean floor around New Zealand in the last 18 months.

Recently, the Government increased the quota for bottom trawling of orange roughy east and south of the Chatham Islands. In a discussion document proposing the increase to the orange roughy catch, Ministry for Primary Industries justified the expansion of bottom trawling on the basis that most fishing occurred in areas that had already been trawled and increased fishing was unlikely to increase the trawl footprint significantly.

However, MPI has conceded that since 2013 the bottom trawl footprint in the area proposed for the orange roughy catch had already increased by more than 800 km2 – that’s an area about the size of Tongariro National Park.

“Continued trawling of damaged areas will prevent recovery, and there is clear evidence that trawling destruction is continuing to expand despite industry and government claims,” says Mr Hague.

A report by NIWA scientists on New Zealand’s deep sea corals describes orange roughy trawls used in New Zealand fisheries as having doors weighing 1000–1500 kg, and heavy ground-gear that can weigh between two and four tonnes. The sweep length can vary from 50 to 200m, and repeated trawls can eliminate corals from 15-20% cover to no visible cover.

“Corals are meant to be protected under the law, but entire protected coral habitats are being predictably destroyed and it’s officially considered ‘unintended’. There is nothing unintended about destroying the seafloor when the fishing method involves dragging two-tonne nets across the seabed smashing everything in their way.”

“These photos of coral species show the huge cost to New Zealand and our environment when our fisheries regulator turns a blind eye to the impact of bottom trawling.”

Research on the long-term recovery of the sea floor after trawling is here: https://advances.sciencemag.org/content/5/8/eaaw4513