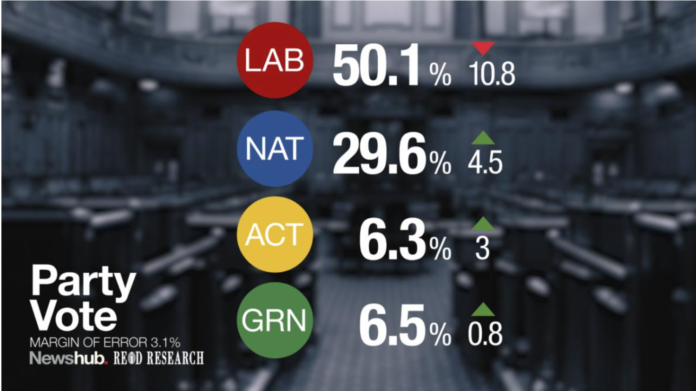 TV3 have finally put out their poll and it’s enough to put the entire ZB Troll Farm on suicide watch because for what must be the 10th poll in a row, Labour can still win a majority Government.

Jacinda – Labour lose 10% and can STILL govern alone??? National must honestly wonder what the hell they have to do to beat Labour short of opening a portal to another dimension or a nerve agent attack on election day. The electorate are so grateful to Jacinda for saving us from the pandemic that Judith could promise everyone $10 000 each and they won’t take it.

Oh look at that. I was right.

GREENS – I’m surprised the Greens are managing to cling on. Could they get over 5% on election day? Maybe. Do those alienating middle class arseholes deserve to get over 5%? No way.

Like, I want to see the Greens returned, but then I balance that against the scream we’ll get from the Wellington Twitteratti if they don’t.

It’s tough eh? Like I want to hear those Wellington Twitteratti scream, but then again I want to have a Party that actually believes in climate change.

What a dilemma. Dave Cormacks tears or a habitable planet.

Simon Bridges: Oh how hard is he laughing now?

National: Judith plays to her spiteful, angry, redneck base, but to everyone else with a reading age of 12, she scares the bejesus out of them. National have no one left to recruit and will be lucky to get over 25% on election day. Judith can’t help herself, her malice will pop out and remind everyone that electing a toxic warlord as Prime Minister is the worst possible outcome for our democracy.

NZ First: I’ve been claiming it was over for Winston for 6 months. I’ve seen nothing that changes that position.

National will be lucky to have 25% on election day.

ACT will pick up the free speech issue Jacinda blundered into last week and keep driving towards double figures.

The glorious wasted vote will recycle and help Labour most.