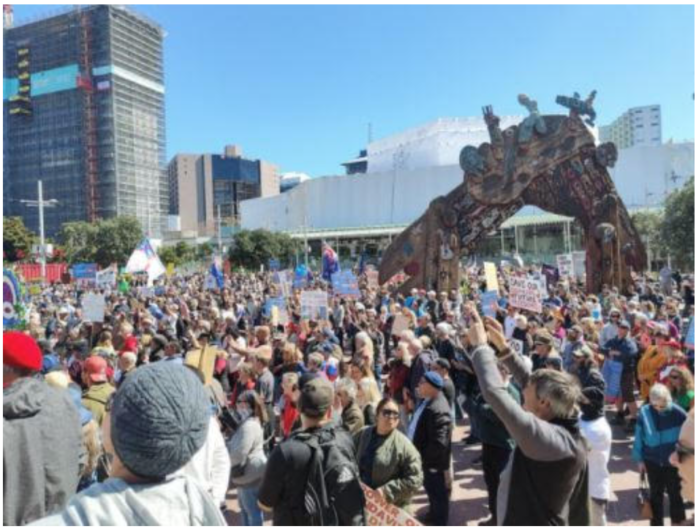 LET’S BE HONEST, last Saturday’s Advance NZ rally in Aotea Square was bloody impressive. If the Left had turned out a crowd that large they would have claimed at least 5,000 participants. Now, the last time I remember seeing that sort of number in the Square was when the CTU summoned its affiliates in support of a concerted national push for higher wages. It was a very well organised affair, with workers bussed-in from all over Auckland. By contrast, Jami-Lee Ross and Billy Te Kahika turned out 5,000+ of their people on the strength of not much more than a summons via Facebook and Instagram. It is now vitally important for the Left to understand what it is looking at: a large and potentially dangerous mass movement of the Right.

Such a thing has not been seen in New Zealand for a very long time. Perhaps the closest historical parallel is “Rob’s Mob”. This, too, was a populist phenomenon, whipped-up on the basis of lies and misinformation by an accomplished political demagogue. The huge difference, of course, is that “Rob’s Mob” was under the firm control and direction of the National Party and its leader, Robert Muldoon. It was a movement created out of whole cloth to challenge the Labour Party’s confident assumption that it remained the party of the people.

With the able assistance of the privately-owned news media – especially the right-wing tabloid “Truth” – conservative working-class voters were encouraged to look upon “Rob” Muldoon as their champion against the pointy-headed intellectuals and communists who were accused of taking-over the Labour Party. The result was a neat anticipation, in reverse, of what has happened with Jacinda. A substantial chunk of working-class voters were drawn across the political divide and into the camp of their traditional enemy. National mustered these defectors with the skill of a heading-dog. The crowds turning-out to Muldoon’s rallies numbered in the thousands. New Zealand had its own Trump when the man himself was still working for his dad!

What we’re looking at in the case of Jami-Lee Ross and Billy Te Kahika, however, is something quite distinct, ideologically and organisationally, from Rob’s Mob. Advance NZ and the Public Party are not under the control of any coherent political group. They are being mobilised by Te Kahika only in the sense that he is drawing together the loose threads of far-Right conspiracism – most them traceable back to Alt-Right social media platforms in the United States – and weaving them into a more-or-less coherent narrative of resistance to Jacinda Ardern’s government.

Once again, the historical parallels are uncanny. In 1974-75, the National Party was offered assistance (at whose instigation remains unclear) from Hanna Barbera – a studio dedicated to producing animated cartoon series for American television. The resulting animated sequences, cleverly embedded in National’s television advertising, burst upon the 1975 election campaign like a thunderclap. Their impact, especially the infamous “Dancing Cossacks” sequence, was devastating. Labour had nothing even remotely comparable with which to answer National’s devastating attack.

Forty-five years later, skilfully constructed media messages are, once again, making a forceful impression on the consciousness of groups who, historically, have identified strongly with the Labour Party. Sourced from the United States, these messages are not, like Hanna Barbera’s cartoons, the product of a shadowy collaboration between the National Party and American “friends” with a mutual interest in ridding New Zealand of a radical social-democratic government. Indeed, it is precisely against such “Deep State” machinations that the political messages of 2020 are directed.

The authors and repeaters of these conspiracy theories have no more interest in restoring the conventional Right to power than keeping the conventional Left in office. Their purpose is to disrupt the status-quo fundamentally: to bring the whole rotten edifice of elite power crashing down upon the heads of its corrupt political mis-leaders. Their loyalty is only to the Disrupter-in-Chief in the White House. But if, by helping Trump, they can also assist his New Zealand imitators and disciples, then where’s the harm?

Overlaying all these hymns of fear and loathing is, of course, the global Covid-19 Pandemic. Without the Pandemic, the febrile environment in which conspiracy theories can take root and thrive would – at least in New Zealand’s case – be lacking.

Interestingly, the formation of “Rob’s Mob”, and the populist campaign (National’s slogan in 1975 was “New Zealand the way YOU want it.”) which they did so much to propel forward, was enormously assisted by the fear and uncertainty created by the 1973 Oil Crisis. Massive increases in the price of crude oil had destabilised the hitherto booming economies of the Western powers. Ordinary people sensed that the whole post-war era of security and prosperity was coming to an end. Muldoon played upon these anxieties “like a piano”.

Now, many on the left will argue that Advance NZ’s 5,000 protesters pale into insignificance when compared to the 30,000 people who turned out against the TPPA, or the 50,000 who protested against the global lack of progress against Climate Change. This is true. Also true, however, is that a large number of the Maori who took part in the TPPA protest, seeing the free-trade agreement as yet another attempt to steal away of their power, were also at Saturday’s protest. Likewise, many of those who joined the climate change protests out of frustration at the lack of action from a prime minister who had promised to make the issue her generation’s “nuclear-free moment”. After so many broken promises – so many betrayals – it takes surprisingly little to convince people that the powers-that-be cannot be trusted. That all politicians lie.

The truly frightening thing about Jami-Lee Ross’s and Billy Te Kahika’s success in persuading thousands of New Zealanders that Covid-19 is just another trick, just another way of stealing away their power, is realising just how many of them once marched at the Left’s side. Before recoiling in horror at where so many of their fellow citizens have ended up, and what they have found there, perhaps “progressive” New Zealanders should ask themselves how, and why, their former allies became so lost.