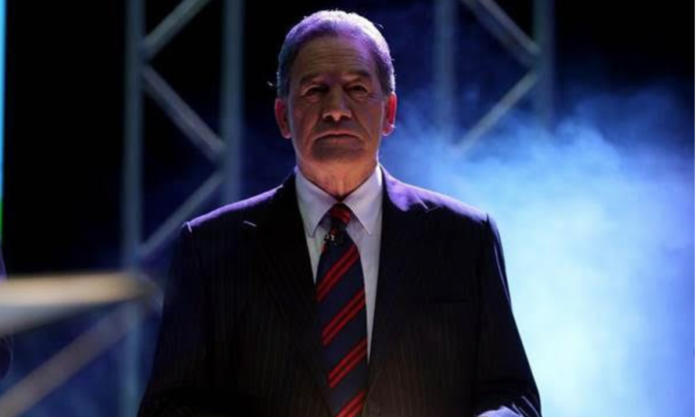 THOSE VOTERS PLANNING to vote for Winston Peters should know they’ll also be voting for a National-led Government. NZ First’s recent actions make it very clear that the party will to do everything it can to secure a victory for the Right on 17 October. If NZ First’s contract with the “Bad Boys of Brexit” hasn’t persuaded the doubters that its fractious sojourn with Labour is over, then Peters’ threat (backed by National and Act) to precipitate a constitutional crisis if the election date wasn’t advanced, should have been more than enough to convince them.

Peters has built his political career on NZ First’s political ambiguity. Supposedly, his party is equally comfortable with the prospect of governing alongside either of the major parties. The last three years have proved all such claims spurious. NZ First is a right-wing party. Always has been. Always will be.

Why, then, did Peters throw in his lot with Labour and the Greens?

The simple answer is, because he has been deeply and repeatedly wounded by National’s mistreatment of him.

National’s bad behaviour goes all the way back to Jenny Shipley’s deliberate destruction of the National-NZ First Coalition in 1998. Ten years later there was the Right’s vicious campaign to drive Peters and his party out of Parliament. John Key played a crucial role in the demolition-job of 2008, but he had plenty of help. Right-wing business leaders, publishers, editors, and journalists, all of them weary of Clark’s long reign, were determined to prevent a repeat of 2005. Peters had to go – no ifs, no buts, no maybes. Nine years later, in 2017, there was the leaking of Peters’ NZ Superannuation over-payments. Although Peters failed to prove it in court, few doubt that National was, once again, responsible.

That’s a lot of bad behaviour to forgive.

The other factor which weighed heavily in Peters’ 2017 decision to throw in his lot with Labour, was the latter’s almost comical unreadiness for office. The NZ First leader must have struggled to believe his luck. Here was a group of very young and very inexperienced politicians, who could easily become putty in his hands. After all, Michael Cullen, Mike Munro and Heather Simpson could hardly sit beside Jacinda Ardern and Grant Robertson at the Cabinet Table – could they? For a man of Peters’ shrewdness and political experience, a Labour-NZ First coalition promised to be a doddle.

And so it might have proved, had Brenton Tarrant and the Covid-19 virus not intervened. It’s always the things politicians don’t see coming that take them down. The Christchurch Massacres and the Covid-19 Pandemic thrust New Zealand’s young prime minister into dramas which the Spirit of History might have written especially for her! If she had ever been anybody’s catspaw (yes, I’m looking at you Grant!) she was nobody’s now. Instead of looking like Jacinda Ardern’s wise old grandpa, Peters peevish interference, and his constant grabbing for the handbrake, cast him, disastrously, as her wicked uncle.

And then there was NZ First, itself. A strange amalgam of Tory paternalism, right-wing racist bigotry and radical economic nationalism. Like nitro-glycerine, NZ First is extremely volatile and hard to handle. Shane Jones’ love affair with his own verbosity. Ron Mark’s love affair with the military. Tracey Martin’s love affair with Oranga Tamariki. Sometimes, miraculously, it all seemed to work. More often than not, however, NZ First comes across as a shambolic and ever-so-slightly shady collection of political eccentrics.

That’s nothing new, of course, the party has always been eccentric. Except that, in the past, Peters’ charisma and energy was there to steer his creation out of trouble. It’s 2020 now, and the years have taken their toll. The NZ First leader has had problems with his health, and, not to put too fine a point upon it, Peters is looking old. In 2020, steering NZ First out of trouble will not be so easy.

Hardly surprising, therefore, that the new breed of diplomats populating the US State Department had little difficulty in identifying the vulnerability of an ageing politician anxious to secure a respectable political legacy. From the perspective of Donald Trump’s gangsterish administration, Peters’ problem was easy to diagnose. What they were looking at was a once unbeatable mob boss on the way out. An old man surrounded by subordinates more interested in what’s going to happen when he’s gone than in what he wants them to do now. Someone in dire need of a little extra muscle. No problem. If there’s one thing the United States isn’t short of – it’s muscle!

When the moment comes, Washington will not be slow to put in a good word for the man who has done more to bed-in the USA’s new “Indo-Pacific Strategy” for containing China than anyone else in Jacinda Ardern’s uncomfortably pinkish government. From “Foggy Bottom”, Winston Peters and Judith Collins will look like a political match made in heaven. Regardless of whether it’s Trump or Biden who wins the presidential election, over the next decade the US State Department and the Pentagon have some very big plans for little New Zealand. As legacies go, Peters could hardly hope for better than making Aotearoa safe for America.

The late Bruce Jesson, alongside whom I co-edited NZ Political Review back in the 1990s, was convinced that Peters and NZ First could be relied upon to take up arms against the neoliberal revolution unleashed by Labour’s Roger Douglas and carried forward by National’s Ruth Richardson. While the former Social-Creditor and staunch economic nationalist, Terry Heffernan, was writing the party’s policies, Bruce’s optimism had some basis in reality. I was never so sure. It seemed to me that the true purpose of Peters’ flashing white smile was to distract New Zealanders from the darkness it lit up.

Sure enough, as the 1996 election approached, Heffernan was replaced by the former National Party MP, Michael Laws. By the time the voters started trekking to the polling booths, NZ First’s and National’s policies had become eminently compatible. When Peters announced that he was throwing in his lot with Jim Bolger, Bruce was shocked. I wasn’t. Furious? You bet! But not shocked.

NZ First is a right-wing party. Always has been. Always will be.