Rogue Poll you say Judith? You must be joking.

I remember last year when the woke activists were screaming to deplatform and censor free speech and I said at the time, ‘you fucking clowns are going to build David Seymour into a God. You fucking clowns’.

I remember suggesting the Green Party’s middle class woke pure temple mantra would risk their viability, and wow, look at that. They are just clinging on by their fingernails.

I remember suggesting that Jacinda’s incredible leadership over the pandemic would cause a seismic shift in political tectonics to the point Labour could win a majority.

The latest TVNZ Political Poll 50 days out from the election tells a tale of winners and losers.

Labour – 53% – Labour could drop to 47% and because of the wasted vote get rounded up to a majority. They have gone up in this poll and are 60% on TV3s Poll. The electorate respect Jacinda in a way they don’t respect National, this represents a tectonic shift in NZ politics. Matthew Hooton doesn’t dream in colour any longer. 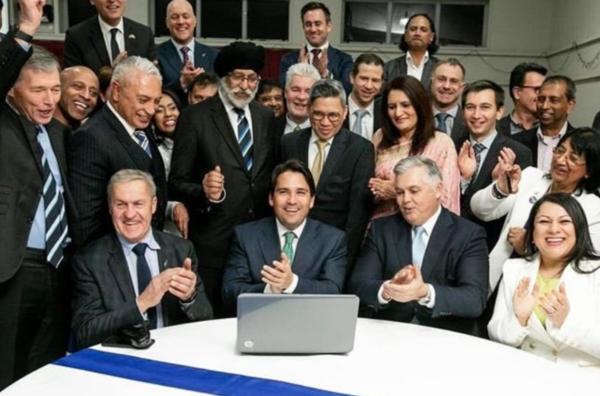 National 32% – Judith stated Bridges had to go if National ever got under 35%. She’s 32% in this poll and 25% on TV3s Poll. People have recoiled in terror from Judith. She has all the charm of a car accident with the empathy of a hungry wolverine in a pre-natal ward. The way she just blew Iain Lees-Galloway’s brains all over the screen of The AM Show without even a flicker of remorse just to change the news focus off her rotten MPs was beautiful to watch close up. Like a venomous snake strike on an infant in slow motion. Couple this with bullshit policy that doesn’t even seem connected to the real time pandemic existence we now live in, and they’re lucky to have 32%. The more voters see of Judith, the more she makes them cry in fear.

ACT – 5% – So if David hadn’t sold his soul to the NZ NRA, he would have gained this momentum all on his own. Now he’s held hostage by guns nuts. At some stage someone is going to have to launch an intervention to rescue him. 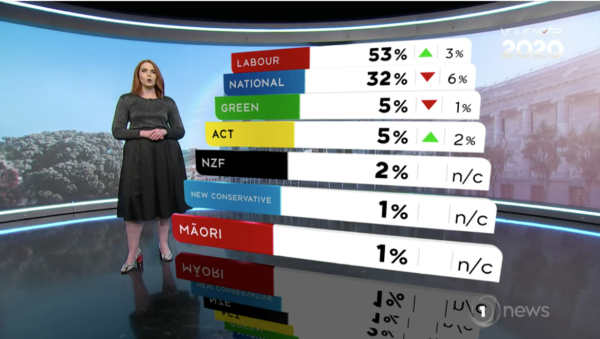 Jacinda: After terrorism, volcanism and a pandemic, she makes us all stand taller. She’s earned a second term, come on, just give it to her already. Only the most bitter partisan won’t begrudgingly acknowledge that she has stepped up at moments of crisis like few previous Prime Ministers have. With the pandemic raging overseas who do you trust to stop it, Jacinda or Judith? If your answer is Judith, then you are the Covid virus.

Chloe Swarbrick – On these numbers, Helen White is in off the list and to everyone’s shock and surprise, the 52 page Green Party manifesto didn’t manage to make any impact whatsofuckingever on the electorate. In fact, the Greens dropped a full point. I mean what a smack in the face is that? It’s almost as if the dense 52 page manifesto didn’t manage to have any memorable catchy phrases, but memorable catchy phrases is playing to the cishet  patriarchy so we couldn’t possibly do anything that cheapens any of our 52 page manifesto because it’s ALL SOOOOOOOO important!

So Chloe winning Auckland Central is the only way these jaw droopingly incompetent clowns get back into Parliament now. I’m genuinely aghast at what they think their campaign is this election, it’s so bad. 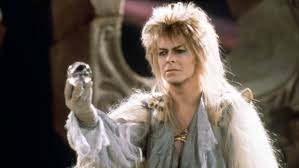 NZ First: It’s all over rover unless Shane Jones wins Northland. Against a boiled ham like Matt King, that shouldn’t be hard but this is Northland and Shane’s articulateness makes him too cosmopolitan for voters frightened by eclipses and vaccines so Northland is a steep mountain. There are no immigrants for Winston to rave about this election and everyone is just tired of his tricks. Without his Queen maker leverage Winston is as powerless as Jareth at the end of Labyrinth.

Tova O’Brien, Mike Hosking, Barry Soper, Heather du Plessis-Allan, Kate Hawksby, Duncan Garner, Mark Richardson: The rip in their souls, the creases of grief around their eyes, the shiver in their voices – this is what I enjoy most after ANOTHER poll showing Labour can govern alone. Their tears are delicious, let me drink deeply to quench my left wing thirst.

Please little baby Jesus, allow National to slip below 30 so Paul Goldsmith is forced to slay David Seymour to win Epsom and get back into Parliament. Oh the lols that would bring.

National will be lucky to get 30%.

NZ First is dust in the wind through a desert on a horse with no name.

The Greens are hopelessly lost and Chloe is their saviour.

ACT’s success will make us all wish the woke hadn’t miscalculated so horribly over the free speech debate last year.