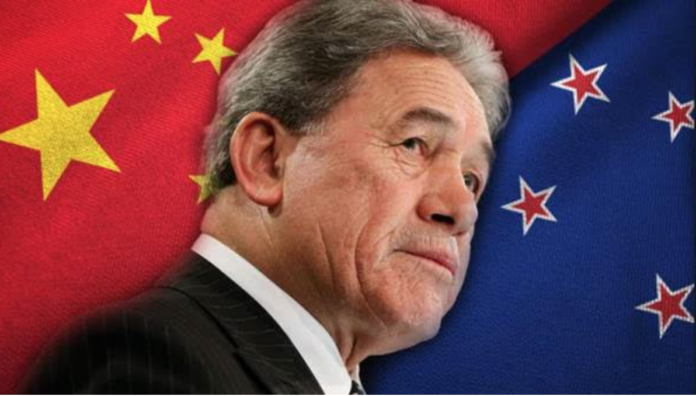 ARGUING ABOUT CHINA is fast becoming a “thing” – especially on the Left. On one side stand the old-timers, derided by some as “tankies”, who grew up during the first Cold War and are deeply troubled by the increasingly reckless, United States-led campaign to create a second. On the other side stand the defenders of human rights and democracy, the people who will not countenance any attempt to intrude economic, diplomatic or military considerations into their quest for liberty. These are the people for whom the ancient cry: “Let justice be done, though the heavens fall!” was invented.

Given the obvious dangers associated with deliberately heightening the tensions between the Peoples Republic of China and the “Five Eyes” anglophone association of the USA, the UK, Canada, Australia and (reluctantly) New Zealand, it seems only prudent to test the moral consistency of the Human Rights and Democracy Camp’s position. How much, exactly, are they willing to give up for the liberal-democratic values they are so determined to promote?

Let’s begin with something very close to the average Westerner’s heart – the miraculous technology that connects and transports them to the rest of the world. Since most of the world’s “Rare Earths”, those incredibly scarce and valuable minerals that make our cutting-edge technology function, are sourced from China, are the liberal-democrats willing to stop using their miracle machines until the Chinese Communist Party is dethroned?

Not fair? Okay. Let’s bring it all back home.

New Zealand’s Five Eyes “partners” are currently putting very heavy pressure on Wellington to join them in “decoupling” this country’s 5G network from the Chinese IT flagship Huawei. If the government buckles and Huawei is banned in New Zealand  (as it has just been banned in the UK) and the CCP retaliates by banning New Zealand’s dairying flagship, Fonterra, from operating in China, will the Human Rights and Democracy Camp accept the resulting domestic economic hardship as the price to be paid for standing up to Chinese tyranny?

And what will the Human Rights and Democracy Camp’s position be if, emboldened by their success over Huawei, our Five Eyes partners insist that New Zealand join with Australia in lifting its defence expenditure to a minimum of 2 percent of GDP? Are these stalwart champions of liberal-democracy willing to see the billions of dollars currently earmarked for schools,  hospitals and fighting climate-change redirected to fighter-jets, frigates and submarines? Will this, too, be accepted as the price of securing regime change in Beijing?

Following the logic of this new Cold War, is the Human Rights and Democracy Camp prepared to accommodate something similar to the sharp shift to the political right that accompanied the onset of the first Cold War in the late-1940s and early-1950s? Will they, as so many “liberal-democrats” did in the face of the “red scare” and the McCarthyite witch-hunts, look the other way as artists, writers, journalists and trade unionists are accused of being communist agents of the People’s Republic and transformed overnight into jobless, friendless political pariahs? Will they, too, embrace the paradox of trashing human rights and democracy in the name of promoting human rights and democracy?

Following this descending geopolitical staircase to its dark terminus, will our by now fully-paid-up New Cold Warriors remain silent as their government ranges itself alongside a United States determined to “face down” the Chinese communist tyrants regardless of the cost? Will they be content to leave the management of this confrontation to a US President who, unlike Jack Kennedy during the Cuban Missile Crisis of 1962, possesses no personal experience of war and insufficient intellectual resources to test and challenge the advice of his Joint Chiefs of Staff? Will they simply hope that the Chinese – as they did 160 years ago – reluctantly surrender their sovereignty to the West’s superior firepower? And what will they tell their children and grandchildren as intercontinental ballistic missiles and their multi-megaton nuclear payloads start criss-crossing the Pacific? That they made sure that justice was done – even at the cost of setting the heavens on fire, bringing down human civilisation and condemning their families to a lingering death from radiation among the ruins?

But isn’t this an argument in favour of craven appeasement? According to its logic, wouldn’t Britain have been wiser to allow Adolf Hitler free-rein in Europe? Aren’t we “tankies”, like the despised Neville Chamberlain, pursuing peace at any price?

The comparison is, of course, entirely spurious. In 1938, neither the UK nor Nazi Germany possessed nuclear weapons. Had they done so, the diplomatic and military calculations of the 1920s and 30s would have been made using the same formulae applied during the first Cold War. Joseph Stalin was, after all, every bit as foul a villain as Hitler, and just as worthy of destruction. But, once his Soviet Union acquired atomic and hydrogen bombs, the costs of making war on it far exceeded any possible benefits – up to and including human rights and democracy! There’s not much call for either in the irradiated wastelands that follow the mutual and assured destruction of a nuclear exchange.

We tankies would like nothing more than to see a China in which human rights and democracy have sunk down deep roots. We are simply doubtful that either goal can be achieved when the US Secretary of State, Mike Pompeo, is openly declaring his determination to force regime change in Beijing. The policy we much prefer is the policy that took the heat (so to speak) out of the first Cold War: “Peaceful Co-existence”. Only when the Chinese Communist Party no longer views the US and its allies as an existential threat will it be possible to resume a meaningful dialogue about human rights and democracy in the Peoples Republic of China. While the Five Eyes powers brazenly advance the diplomatic, economic and military containment of China – also known as the “Indo-Pacific Strategy” – such a dialogue is impossible.

New Zealand’s own relationship with China might, however, be salvageable if our own Ministry of Foreign Affairs and Trade was willing to equip its minister, Winston Peters, with a few facts. In relation to Hong Kong, for example, it would have been immensely helpful for the New Zealand Government to have drawn its citizens’ attention to Article 23 of the 1997 treaty by which the UK returned Hong Kong to China as a Special Administrative Region. The article states:

In other words, legislating for the protection of national security – the very action our Foreign Minister is decrying – was specifically provided for in the Basic Law of the Hong Kong SAR more than 20 years ago. (Hat-tip to Mike Smith for drawing Article 23 to my attention.)

All that has changed since the West happily signed-off on Article 23 is that China has grown stronger. That strength has helped to make New Zealand a more prosperous country. In joining the reckless efforts of the United States and the other Five Eyes powers to contain and weaken China we will do nothing to strengthen human rights and democracy in that country and may, by heeding the dangerous counsels of coercion, end up weakening them in our own.

Just months before he was assassinated, President John F. Kennedy addressed the students of the American University in Washington. What he said then is as relevant to international relations today as it was in 1963:

“So, let us not be blind to our differences, but let us also direct attention to our common interests and the means by which those differences can be resolved. And if we cannot end now our differences, at least we can help make the world safe for diversity. For, in the final analysis, our most basic common link is that we all inhabit this small planet. We all breathe the same air. We all cherish our children’s future. And we are all mortal.”