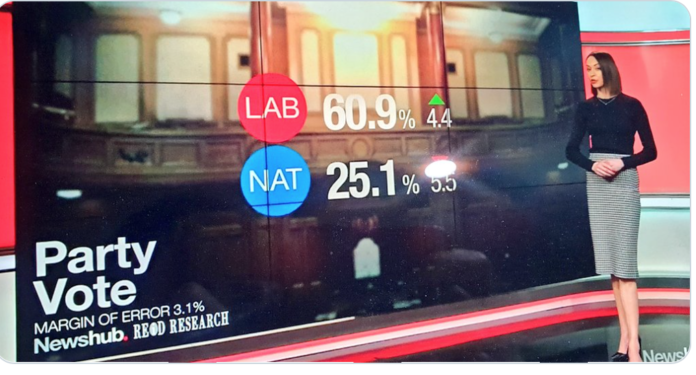 The Newshub poll is such a bombshell because many feared the rise of Judith Collins would excite a dark side of the NZ psyche and National would be competitive again.

The Newshub Poll killed that fear off. Labour staggeringly is now over 60% while National have slumped to barely 25%.

NZers political loyalty was built when people were genuinely frightened over lockdown and Jacinda made them feel safe, in the face of Judith’s malice, that solidarity is not eroding.

What the Right in NZ can not comprehend is that solidarity the lockdown generated – they are all selfish individualists, they can’t imagine what feeling bonded for the common good actually fells like, that’s why they are floundering.

There are many winners and losers.

Simon Bridges: We said here on TDB that National could crash out so hard that their supporters looked back on Simon Bridges 29% with fondness. It has come to pass. Simon must be laughing his Yak off.

Jacinda: She is a God damned phenomena in that she is a collection of phenomenon. She just turned 40 and after terrorism, volcanism, a pandemic and juggling motherhood, she has earned a second term. I mean short of curing cancer, I’m not sure what else she would need to do to convince Kiwi’s to give her a second Government. With a majority Government it would force a major rethink.

Chloe Swarbrick: Labour are doing so well that Helen White would get in off the list and Chloe could press this point to win Auckland Central.

Māori Party MPs: Every Māori candidate running in the Maori electorates could use the same argument.

Ben Thomas: He’ll be getting extra media slots to explain why the fuck National are sinking so badly and he’ll do his affable Labrador routine that keeps The Spinoff  booking him for their tedious podcast.

Damien Grant: Managed to prove he was more ethical than the entire National Party with this column.

Judith: We saw what Crusher does under pressure, the casual malice she performed to Iain just to create a pause in the news cycle, she can’t help herself – this is what she is & under this polling pressure be prepared for her to sink us to never before known dirty politics.

National: These cowards dumped Bridges and have now selected a politician as leader whom they can’t control.

Matthew Hooton: Oh Matty Hooton, what have you done? You walked away from credibility at RNZ and the Herald for this hate pus clusterfuck? Your purse Ben Thomas can only say so much to try and gloss over all this. Matty, Matty, Matty. Poor Matty.

Tova O’Brien, Mike Hosking, Barry Soper, Heather du Plessis-Allan, Kate Hawksby, Duncan Garner, Mark Richardson: The rip in their souls, the creases of grief around their eyes, the shiver in their voice – this is what I enjoy most after a poll showing Labour at 60%.

Winston Peters: Looks like the hand break has some woke Pixie dust in it. Bye bye Winnie, your fear mongering and race baiting has been a benchmark of NZ Politics and now we are all going to live to see NZ First buried. Happy days.

ACT: The problem with ACT’s rising success is that more and more of the NZ NRA who have hijacked David’s Party start getting elected, and I get a funny feeling that ACT didn’t really vet those candidates very well at all. Expect all sorts of details to start leaking about 4 weeks out from the election.

NewsHub, ZB, MagicTalk, NZ Herald: With Labour at 60% these media Networks have NO openly left wing broadcasters or writers so they will take another hit in audience numbers.