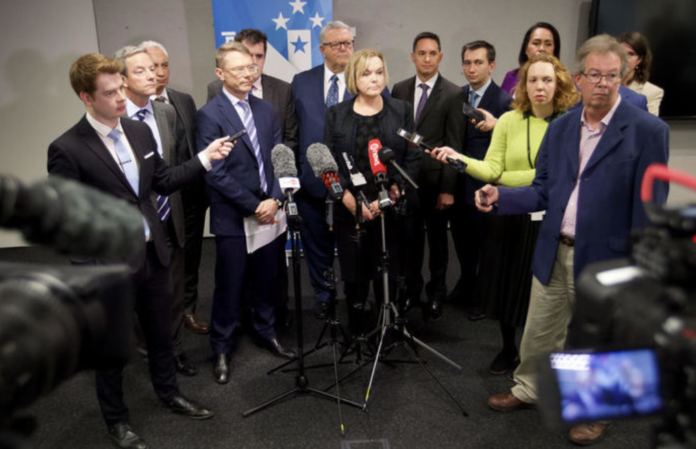 New Zealand politics hadn’t been noted for its volatility over the last few decades – at least back until the 1980s, but last election’s Meteria Turei bombshell and Green Party resignations, Andrew Little’s withdrawal as Labour’s leader, and Jacinda’s arising, created a dynamic and interesting election. The historic events of the last three years and Jacinda’s ease of handling murder, mayhem, plagues and disaster made it look like Labour were a shoe-in for 2020, maybe even governing alone.

Even after Todd Muller’s coup on National leader Simon Bridges, it seemed maybe this year’s election would be a tame affair. By accounts, Muller was a nice man. Though nice as he may be, questions are raised how he could then oversee the breach of quarantining Covid-19 patients’ privacy and fail to own and admit his and other Ministers’ involvement and knowledge in it.

In his first speech as leader, Muller appeared to be trying to appeal to softer National voters, to emulate or affect a politics of kindness following Jacinda’s successful lead. And then, in his first speech on home turf after becoming National’s leader, Muller talked about Te Aroha, the town of love, and he mentioned love nine times. He talked about noticing socioeconomic disparities in rural Waikato as a youngster. So far, so “see I’m like Jacinda too, but a better economic manager”.

He quickly learnt that you can’t ‘out-Jacinda, Jacinda’. She’s got the market covered when it comes to authentic compassionate leadership. But Muller couldn’t compete with the heat in the political kitchen either. And while the charitable response to Muller’s break-down has been that ‘politics is a nasty business’ – and surely it is – watch the media like a pack of hounds baying for blood – it takes more than an assumption of kindness or ‘being a nice man’, it clearly takes a certain kind of impervious ruthlessness, to survive, let alone succeed or excel.

Judith ‘the Crusher’ Collins dispenses with any attempts to sing by Jacinda’s songbook. She’s confident enough in her own beliefs and her own ideologies to carry not just her own luggage (and baggage), but to do it with chutzpah. She is apologetic to no-one for her views, her past, her ambition, her policies, her eye on the end prize, or her decisiveness. She’s definitely not sorry for not being a man (to paraphrase another former opposition leader – David Cunliffe), and she’s not sorry for being white – or assumedly, privileged, either. The fact that she doesn’t doubt herself means that those on the right are less likely to doubt her either. As decisive as she has been, already she must have offered some redemption for despondent National supporters, she’s the party’s Lazarus, bringing the party back from the dead.

Confidence counts for so much in politics – if you don’t believe in yourself, voters won’t believe in you either. Attack is sometimes the best defence – although that seems to be a less effective strategy for Winston Peters over time. And confidence is key to handling the media. Muller’s equivocation was a bit part of his downfall. He equivocated because he was not honest, and the media could smell his weakness. Judith Collins, on the other hand, admits of few vulnerabilities – though her sadness at the loss of her pet cat Minnie, and admiration of Jacinda’s hair are frailties we can forgive.

In his Te Puna speech, Todd Muller quoted the New Zealand poet Alan Curnow’s poem ‘the art of walking upright’. He invoked the famous line ‘Not I, some child born in a marvellous year, will learn the art of walking upright here’. He said it was his personal passion that every one of us in our time, not some distant year, can truly stand upright here. Thing was, Muller himself was unable to stand upright and admit or defend the dirty politics that was – and has been – at the diseased heart of the National Party.

In his own ‘The trick of standing upright’ building on Curnow, Northland doctor and poet, Glen Colquhuon says ‘The trick of standing upright here, is the trick of using both feet. One is for holding on, one is for letting go.’ But at every step we take, we are falling. Judith Collins has probably arrested the immediate falling of the National Party. She’s managing to stand on both feet. With her self-confidence and media competence, she is her own woman, and not a pale imitation of Jacinda. She’s confident and self-defined enough, to not even try. National’s expectations may have been low after the last few months of ‘bungling’ by Simon Bridges and then Todd Muller. The party will be happy that they have a bold, walking, talking leader. Judith has had a great run in the media, and so far has been getting the sort of press needed to convince centre-right voters and the business community she and National have something worth voting for. Already there’s a media subtext – while there were reports this weekend about the new National Party infrastructure policies, and photos of Crusher with a drill, erecting billboards, ruling out working in coalition with New Zealand First, Jacinda’s media headlines told how she’d made time to meet her impersonator. “Jacinda may be kind”, this says, “but the Crusher is getting down to business, with all steely competence”.

There is just enough sense and vision in the new National Party policies for a North Island ‘Golden Triangle’ ‘economic powerhouse’, creating Australasia’s most dynamic region, enough money in infrastructure plans, and enough resonance in ripping up rather than tinkering with the RMA, that powerful business voters will be pleased.

But with the infrastructure policies announced yesterday that focus on huge toll-funded motorway projects and threaten SkyPath, and plans to suspend SuperFund contributions, it’s a regressive and reckless package. These policies and a potential National government will inevitably take us backwards. The Crusher is a conservative so it’s no wonder. And as Franklin D Roosevelt said, “…a conservative is a (wo)man with two perfectly good legs, who …has never learned to walk forwards at all’.