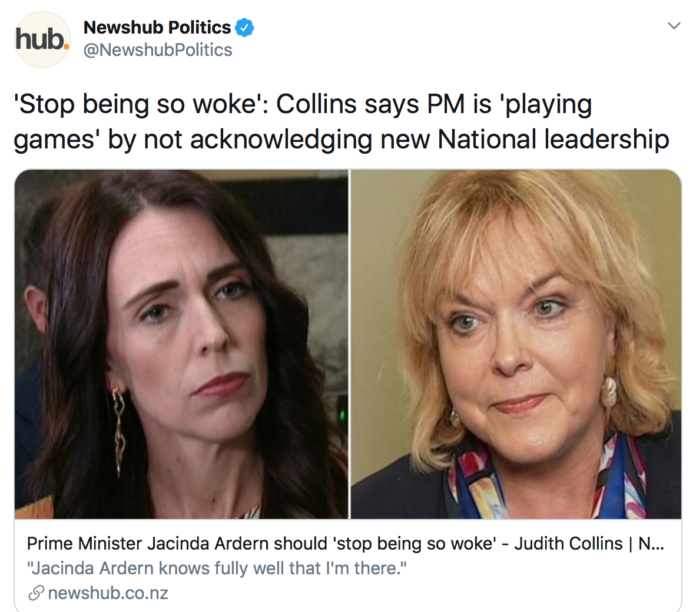 As someone who likes to credit myself with the wide spread use of the word ‘woke’ as a derisive term aimed at identity politics activists in NZ, I feel we need an urgent redefinition of the term as it looks likely to be the most over used insult in the 2020 election.

However, this sure as Christ isn’t ‘woke’…

National Party leader Judith Collins says the Prime Minister needs to “stop being so woke” and should acknowledge the new Opposition leader.

While speaking to Magic Talk host Ryan Bridge on her first day as the party’s leader, Collins said she believes Jacinda Ardern is playing around by not speaking more on National’s new leadership team.

…ummmmm. What the fuck?

Put aside the naked malice in her demands, folks this seems a bit Joe Biden of Judith here, doesn’t it?

Just because Jacinda doesn’t want to talk about you doesn’t mean she’s ‘woke’, it means you are politically irrelevant and trying to paint the PM not talking about you as a form of identity politics activism makes you sound crazy because her ignoring you has NOTHING to do with identity politics.

Jesus wept, is Judith falling to pieces barely 24 hours into her run as Leader? This seems a tad unhinged doesn’t it?

Firstly, it’s not up to Jacinda to talk about Judith, has Judith not read the handbook or something? The Prime Minister doesn’t tend to spend much time chatting about the Leader of the Opposition Judith.

Secondly, what the Christ does this have to do with being ‘woke’. Jacinda ignoring you isn’t ‘woke’. I think you mean to say she’s not being woke ENOUGH to congratulate another woman to face off against the heteronormative cis white male patriarchy?

Is that what you mean Judith?

Oh lord, please let her be this confused for the election.