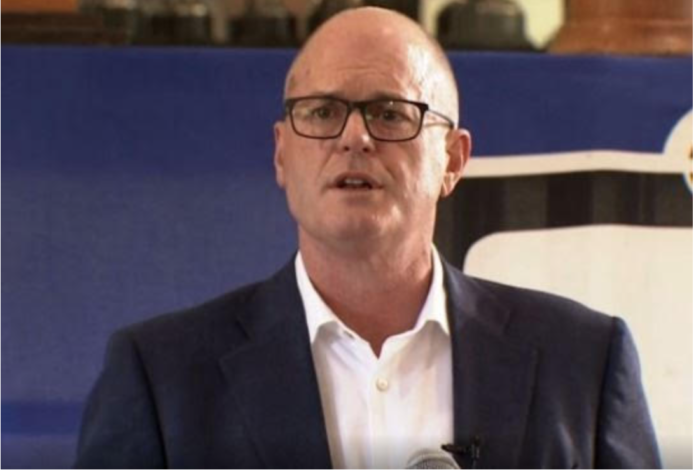 TODD MULLER is toast. All the signs are there. The weird contradictions contained in his own public statements. The constant leaking of damaging information from inside his own caucus. The obvious delight of former colleagues as they lower their lifeboats and pull away from National’s sinking ship. The party’s been here before. Unfortunately, it was in 2002.

Just think about Paula Bennett’s bravura exit performance. Dancing up a storm with Tom Sainsbury – as if to say: “You always thought Tom was exaggerating, didn’t you? Nah, the boy never even got close!” There was something very P.J. O’Rourke about Bennett’s departure: something subversively liberating. When right-wingers turn out to have a sense of humour strong enough to make even hard-bitten lefties chortle, it says something very reassuring about our common humanity. Though some of us are loathe to admit it, we are all much more the same than we are different.

One of O’Rourke’s most memorable lines was: “First we got all the money. Then we got all the votes. Now we’ve got all the power!” Bennett’s celebration boogie, in anticipation of Muller’s failure to win O’Rourke’s electoral trifecta, has about it the same bracing honesty. Speaking of her hardcore National colleagues, she once told a startled journalist: “We didn’t come to Wellington to fuck spiders!” And wasn’t that the truth?

Muller’s lack-lustre and self-contradictory performances offer conclusive proof that a political leader cannot be manged into competence. National’s new boss has Janet Wilson handling his media and Matthew Hooton writing his speeches. Both are highly professional political and public relations specialists, and Muller is lucky to have them. But, they can’t be Leader of the Opposition for him.

It was exactly the same with David Cunliffe. Not even Matt McCarten, a.k.a “Mattiavelli”, could transform the ambitious climber who deposed David Shearer into a credible alternative prime minister. In the end, the person has to want the job enough to do what it takes to get it. Also needed is a clear idea of what to do with “all the power” once you’ve got it. This is where Muller falls short. Quoting Mickey Savage is all very well, but when a traditional Catholic talks about “applied Christianity” – what, exactly, does he mean?

It’s something which, I suspect, Muller’s evangelical Christian colleagues would also like to know. Their right-wing, fundamentalist version of the Christian message would see National taking a very different stance on a broad range of social issues from the one so clearly favoured by Muller and his liberal allies. A couple of months back, David Cormack (another PR maven) offered up his own take on National’s Christian conservatives:

“All of the highly conservative Christian MPs want to fight their very own culture wars here in NZ; think GOP level. Staunchly pro-Israel, really strongly anti-abortion, anti-women and gay rights. They want to fight the ‘Marxism’ that they believe has infested our schools, universities and even Labour (!)”

Contrast these hardline views with the gentle conservatism set out by Muller in his Te Puna hometown address in mid-June. Beautifully crafted by Hooton, the speech enunciated a set of values radically at odds with the proudly reactionary beliefs of Chris Penk and his comrades. Reading that speech, Muller’s opponents in the National caucus must have wondered whether their party was any longer big enough for the both of them.

On the one hand stands Muller (and Hooton) eager to keep the two main political parties committed to delivering the same neoliberal lines (albeit with some relatively minor differences in emphasis) that have bound the precious “median voter” to the aspirations of the broad centre of New Zealand politics for the best part of four decades.

On the other hand stand what might best be described as the “radical conservatives”. Their principal objection to the existing neoliberal order is its acceptance of what they see as the immoral and socially-destructive consequences of the cultural revolution of the 1960s and 70s. With some justification, they see identity politics as intrinsically hostile to the unequal distribution of power and wealth under patriarchal capitalism. Take patriarchy out of the capitalist equation and, in the view of the radical conservatives, it will fall.

These are not the sort of ideas to earn more than a curl of Nikki Kaye’s upper lip. Rightly, she foresees the wholesale rejection of such an avowedly sexist National Party by the overwhelming majority of middle-class Pakeha women. Indeed, it was to forestall such a radical-conservative deviation into Trumpland that the coup against Simon Bridges was mounted. That it succeeded only because the erratic Judith Collins anticipated taking more satisfaction from shafting Bridges and Bennett than from saving them, merely reinforces the scale of the dysfunction currently besetting the National Party.

Such dysfunction is essentially ineradicable by anything other than the annihilation of one of the two contending factions. This is, after all, what happened in the Labour Party when the Rogernomes and their careerist enablers made it more-or-less impossible for the left faction to remain within the party without surrendering their most deeply held convictions.

For National’s radical conservatives, the path to this annihilation solution is clear: engineer a defeat on a par with the disaster of 2002. The principal victims of such a strategy would be the party’s liberal faction. In Lenin’s famous phrase, it would lead to “fewer – but better” National MPs. A solid foundation of radical conservative patriarchal Christian capitalists upon which National’s electoral recovery can be built.

You see now why Todd Muller is toast! Also clear, is why so many National women are now determined to give their votes to Jacinda.