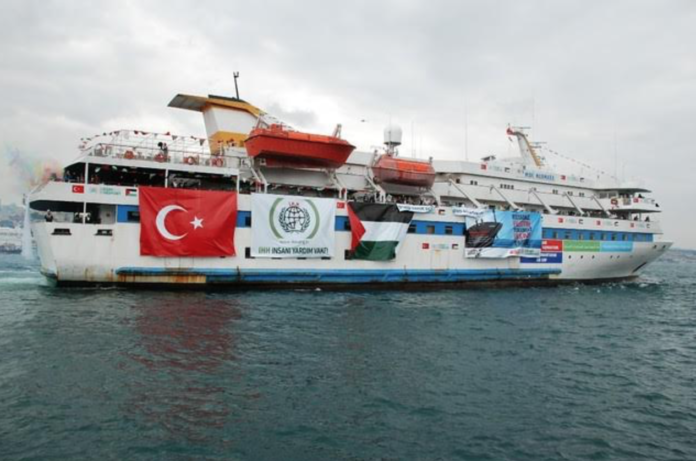 Ten years ago it happened.

May 31, 2010  should be remembered as a ‘day of infamy’, the day when a convoy of aid ships, led  by the large Turkish passenger ferry   Mavi Marmara, was violently attacked in the middle of the night,  in international waters , by heavily armed Israeli commandoes from helicopters and from Zodiac gunboats.

There were 581 passengers on board, of 32 nationalities, hoping to break the illegal maritine siege on Gaza and deliver desperately needed aid.

This incident should be part of our collective memory instead of disappearing into Orwell’s memory hole. At lease one film,  ‘The Truth: Lost at Sea’, has been made.

I am relying on the book Midnight on the Mavi Marmara, edited by Moustafa Bayoumi , published by Haymarket Books. If it is not in your public library, you can ask them to order it. It would useful for support groups to have a copy  to share.

The Swedish writer, the late Henning Mankell was on board. “04:30 Suddenly there is the sound of gunfire. So now, I know that Israel has chosen the route of brutal confrontation. In international waters, ..we gather up on the bridge, ..a man is shot, I am seeing this happen.”

Film maker Iara Lee reported,  “I am a dual US-Brazilian citizen of Korean descent. I am a film maker and a human rights activist, ..When the Zodiacs came and surrounded us and their helicopters began sending commandos down, it was chaos. The women were told to go downstairs. I feared for the lives of my fellow passengers as I heard shots being fired on deck. I was very concerned about my cameraman and friends , so I went up to see what was happening….I had expected soldiers to shoot in the air or aim at people’s legs, but instead I saw the bodies of people who appeared to have been shot multiple times in the head or chest.”

Kevin Overden, UK activst , journalist explained, “It began with percussion grenades. They are explosives , they can injure people badly when they go off next to them. They were designed to create panic when you consider that this was a civilian passenger ship carrying over 500 people from 32 different nationalities. …We heard the different noise of live rounds  being fired, but not indiscriminately or wildly. Rather it was carefully targeted from both sides of the ship, which was surrounded, from the helicopter, from those Israeli attack forces who were landing on the ship itself.”

Writers  discuss, among other points,  the ability  of the Israeli regime to promote its version of events both to the Israeli public and to overseas media outlets. The official Israeli line is that the passengers were violent ‘terrorists’ with links to al Qaeda. The IDF commandos were innocent victims, lucky to get out alive.

American journalist Max Blumental just happened to have arrived in Israel the day after the flotilla raid. “The IDF’s Spokeman’s Office churned out one misleading claim after another , each one more implausible than the next, seeking to implant in the public’s mind a vesion of events that bore little realition to reality…It was startling to see how some of Israel’s most respected reporters lined up to serve as military stenographers, barely challenging the IDF’s rapidly changing versions of events. IDFclaims about the flotilla passengers’ links to Al Qaeda, anti-Semitic statements shouted at the Israeli Navy, and terrorists intentions were eagerly broadcast by the Israeli media without a second thought. When independent reporters forced the IDF to retract or ‘clarify’ all of these claims, the Israel news outlets refused to correct their errors.”

The IDF claims that the  passengers were violent, the Israeli Navy was only acting in self-defense.

Californian piano-tuner Paul Larudee responds, “Self-defense is for those who are being attacked, not those who are attacking. Furthermore there were no arms of any kind aboard our humanitarian aid ships….If the attackers of our ships had been Iranian, would anyone be making the absurd excuses we are now hearing for Israeli actions?”

Some passengers did put up with a defence when their ship was attacked.

Ken O’Keefe, ex-US marine who relinguished his US citizenship and became an Irish national ,relates, “On the morning of the attack, I was directly involved in the disarming of 2 Israeli commandos. ..I knew the commandoes were murdering people when I removed a 9 mm pistol from one of them…I took that weapon away, removed the bullets, proper lead bullets, separated them from the weapon and hid the gun….I also helped to physically separate one commando from his assault rifle which another brother apparently threw into the sea.”

The Israeli attackers were vicious.  Autopies later revealed details of execution style killing. The Guardian reported, for instance, that  19-year old Furkan Dogan was shot 4 times from less than 45 cm, in the face, in the back of the head, twice in the leg and once in the back, “.

He was an American, born in New York State. Yet the US Government took no action against Israel.

Does this not send a message to the Israeli regime that they have a free hand from the US to do anything they want, even murder Americans?

There is a New Zealand connection to the story of the attack on the Mavi Marmara. One of the passengers was Cantabrian Nicki Enchmarch, of the ‘Viva Palestina ‘campaign. Kevin Overden reported, “She was next to one of the very first people to be killed. He was a Turkish man who was holding a camera, that’s all he had in his hands. He was shot directly through the center of the forehead.”

Kevin Overden summarized. “This was an attempt to instill fear,  to use terror to achieve a political objective. This is the dictionary definition of terrorism. Real terrorism, state terrorism, by Israel.”

Yet, on spite of the lies, in spite of the violence , there have, since 2010, been more attempts to break the barbaric siege imposed on Gaza. There may even be  another Freedom Flotilla later this year.

The siege will be broken , not by governments but by people of consciece.

As Alice Walker, who, herself,  has taken part in a Freedom Flotilla effort, explains…

“I know that the people of the Freedom Flotilla are, were in some cases, some of the best people on earth. They have not stood idly by and watched the destruction of others…. We the people, who ultimately hold all the power; We the people who must never forget to believe we can win..It has always been about us, as we watch governments come and go. It always will be.”