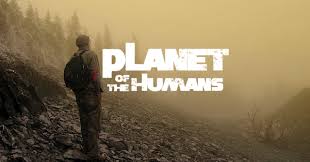 If nothing else, it will get you thinking.

(And you don’t have to gather in a movie theatre to view it).

With its damning exposure of systemic corporate ‘Green Washing’, involving as it has, some leading Green and climate change organisations, this movie has landed like a bombshell in the midst of the environmental and climate change movement, causing some of them to make some (slight) policy backdowns in their support for the bio-mass industry, which was heavily critiqued in the movie.

However despite this slight vindication, planet of the Humans has had mixed reviews from the Left and the environmental movement,

Claims of misrepresentation and lies aimed at this movie, by some in the environmentalist movement, have even led to calls for its censorship and removal from the internet.

There are two main charges made against this movie from the Left:

The first charge, is that over the ten year gestation of this movie, a lot of its information about the efficiency of alternative Green energy has become outdated, and that modern solar and wind energy alternatives are way more efficient than the examples given in the movie. A claim that may have some merit, but in my opinion is a rather petty quibble that doesn’t take away from the main premise of this movie, that alternative green energy is incapable of powering human civilisation at our current levels of consumption, (and waste).

The other claim made about this movie is that it is “eco-fascist”. That it flirts with population control and eugenics.

To me the main message of this movie is that we must cut back.

The Covid Crisis shows that it is possible.

‘Humans’, ‘us’ have lost our way. Or more accurately have yet to find it. The climate crisis is only one example; the savage wars, including acts of genocide, we have committed against each other, is another tragic example, that humanity is still finding its way..

The main point of this movie, that its critics universally ignore, is that to save the planet, (and ourselves), we must cut back.

Trying to replace hugely wasteful levels of resource use with the same level of renewables, a fact made very powerfully in this movie, is actually physically impossible.

But the Covid crisis proves the main premise of this movie, it is possible to cut back.

The solutions are all around us. Free public transport to incentivise people out of hugely environmently damaging and terribly wasteful resource use, private cars.

We were told this was impossible.

All of a sudden it is possible. (i)

We were told that housing the homeless was equally impossible. Again literally within days, accommodation was found for them. (ii)

At the highest levels of government, traveling hundreds of miles by air to attend a meeting has been replaced by Zoom. (iii)

Cheap mass air commuting may never be the same.

The same with the hugely polluting cruise ship industry, as people realise that they are little more than floating human petri dishes. (And have been for a long time. A few years ago my father who is now 84 went on one of these cruises and told me that they had to quarantine one half of the ship off to stop an outbreak of the flue that ripping through the passengers. It is not widely advertised that these ships carry quite extensive on-board morgues.)

Representatives of Waikato Tainui report that the Waikato and the Waipa rivers have not looked this clean in a long time.

During the lockdown while most of the workforce were locked down, the ‘economy’ of profit and growth almost ground to a halt. But the real economy of providing food and shelter and health  care never missed a beat. The implications are clear, a lot of the population are engaged in meaningless work.

A UBI has been talked about seriously by Grant Robertson, the Minister of finance. A UBI would free many from doing meaningless wasteful jobs, just to pay our bills. (iv)

Personally speaking, there are much more rewarding things I would rather be doing than be a wage slave.

To me this movie was honest and clear eyed, not eco-fascist as its critics claim..

It may be a little trite, in the repeating of it, but ‘The world has enough for our need. But not for our greed’, is what I thought this movie was about.

(i) Public transport will continue to be free while we are at Alert Level 3.